I’ve actually been to the Wekfest show in Nagoya ever year I’ve been in Japan now. That’s not as amazing as it sounds though, as I’ve only been in Japan for two years. But, do you know what is amazing? Wekfest is. That’s what’s amazing. This show is one of my favourite show and shine events in Japan, out of the few that I have attended. 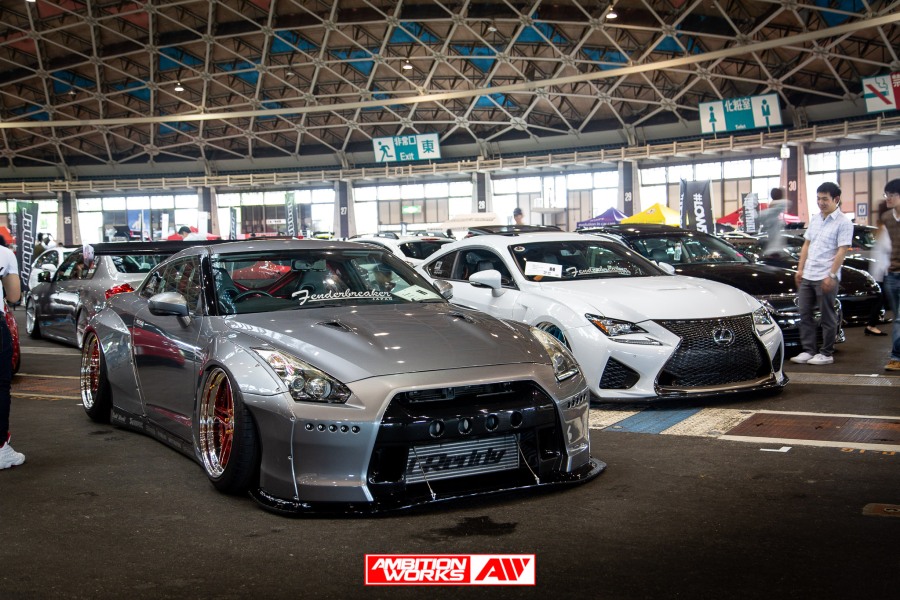 Situated right on the ports of Nagoya, it’s one yearly event not to miss. Last year and this year was a little different outside the show. The open 1 level outdoor car park was closed, which was a disappointment, as this was a show in itself. In return, I had to park in a multi-level car park attached to the mall which wasn’t friendly on the wallet.

A quick walk through a very new and artificial looking outside mall led me straight to LEGO LAND! I nearly ditched the car event altogether to hit up an overpriced but fresh theme park. This year I was ‘press’, so that wasn’t really an option, was it. 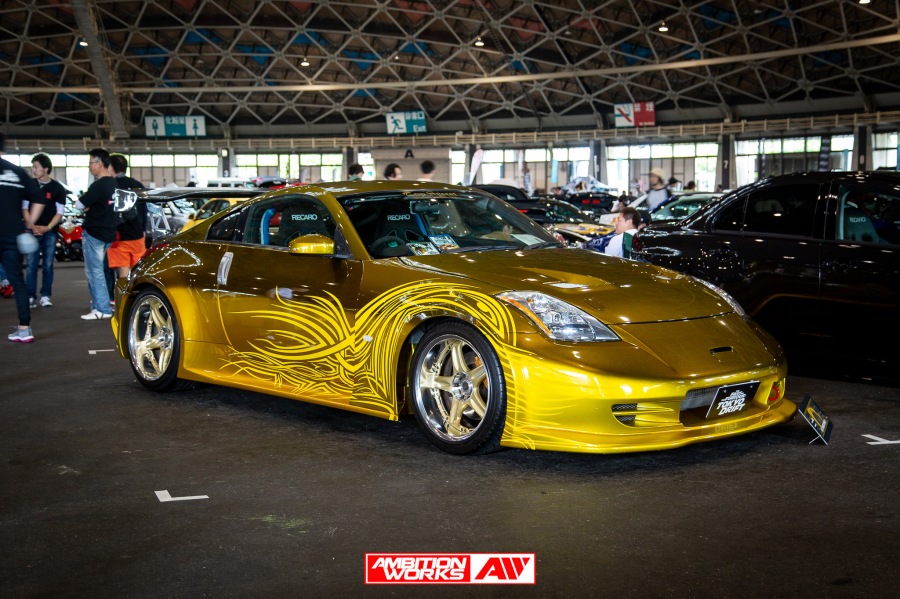 I walked up to the event hall, just before opening to get in before the masses arrived. I felt pretty special walking past the hundreds of people that were all lined up. I hate lines, as I assume most people do. It was a good start to the day.

In the 2 years of my time in Japan. I’ve met a few people, and only ever see them at car events because I live so far out of the way from civilization. My drive to Wekfest was easily over 6 hours on the toll roads. The friendly faces all make up for the long journeys in the end I think. 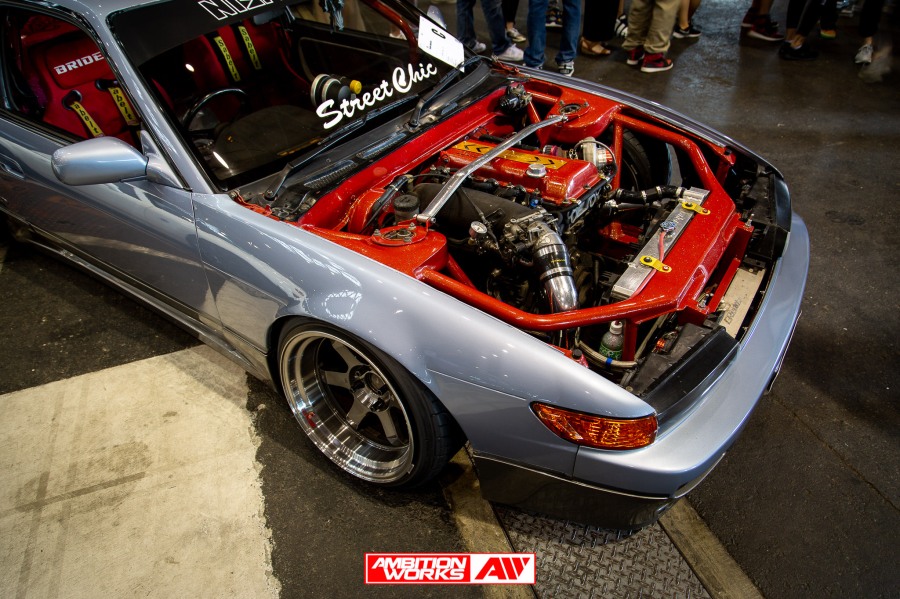 However, I have a problem of remembering a car, much before I do the owner. And because for the most part Japanese people, they look the same, and I only ever meet them once or twice a year, I struggle with faces and names! 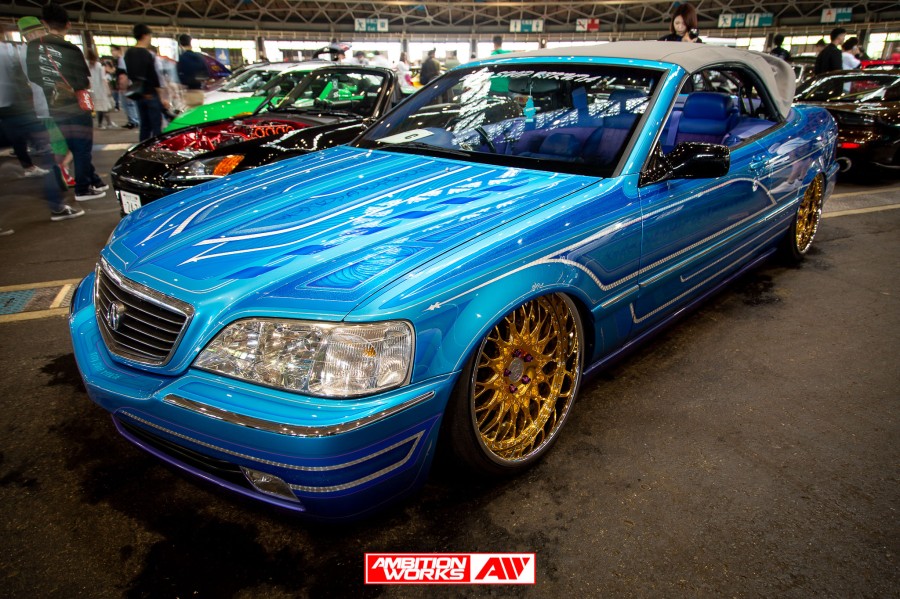 The hall was again packed, just like last year. The uniqueness of the dome-shaped roof makes for a tricky lighting situation. I lugged my tripod around for the first half of the event, getting crisp pictures with low iso. Then I couldn’t be bothered with the time it took to take one photo and then prepare for the next, so I ditched that and cranked up that lovely iso.

There were two 350Zs that really grabbed my attention. The Spirit Rei 350Z and this one. To be honest, I liked this one much more. The subtle custom paint job really ticked my boxes. And I am a total sucker for a shiny red car with crispy white wheels.

Lately, I’ve been dabbling into the engine bay of my car, making it look a little bit better than factory. I haven’t actually done that much, but what I have done has taken a while and cost a fair amount. I can’t even imagine how much time and effort goes into cars like this where the engine bay looks just as good as the rest of the car. Not one bolt unturned. 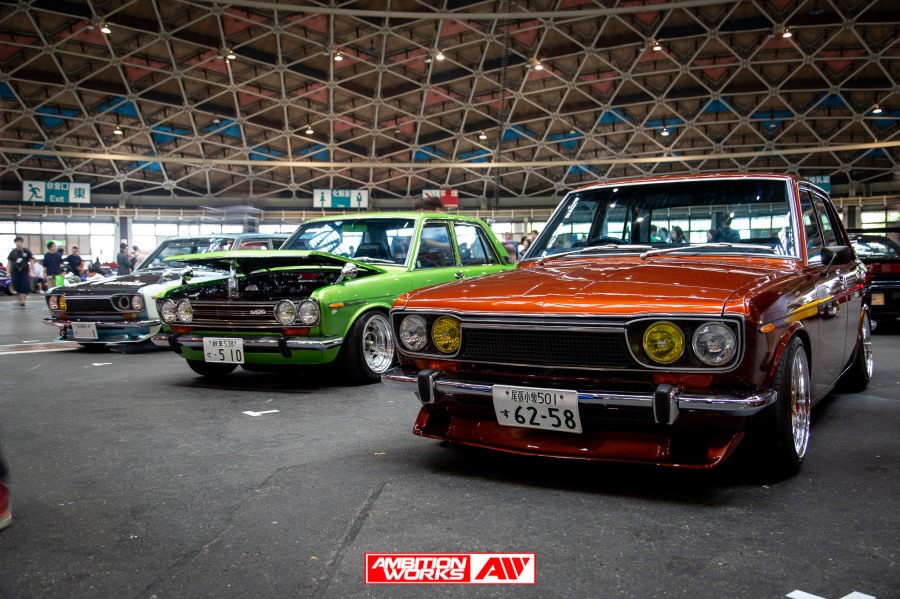 A trio of cars from a couple generations back found their way into my camera. I’m not even going to pretend that I know anything about cars from this era. They look good, clean and simple.

How about this for a combo? When I saw this it sent a spark inside me that started a little fire. It just looks so effin good. I’m not sure what else the owner could have done to make it even better. I might have to get a set of these wheels for myself one day.

The S2000 is rapidly becoming an expensive investment. From a stock one going anywhere from 20k nzd if my memory serves me correct. While I do like the look of them, this one especially, I had a site in the driver’s seat once, and it’s just too small I think. 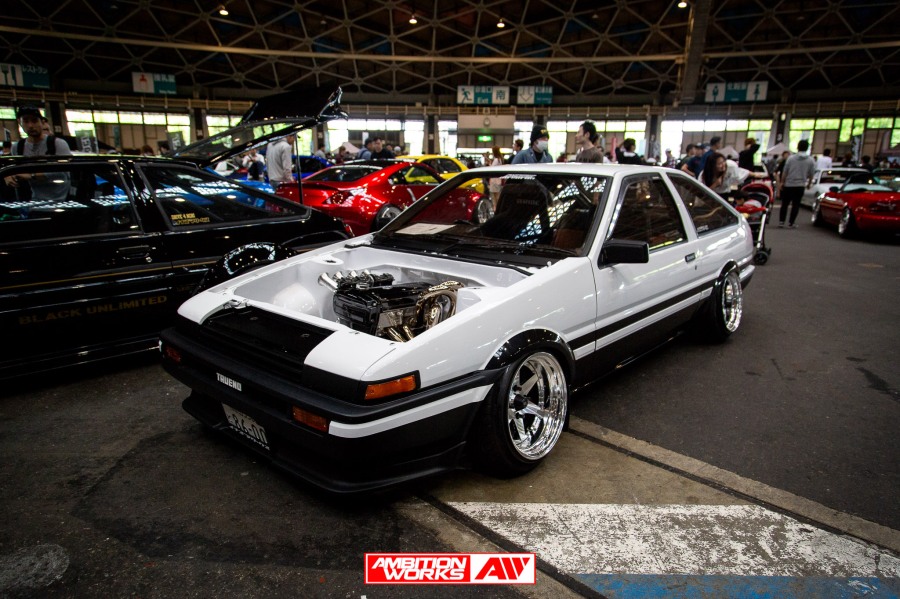 You’re probably thinking at this point, “Were all the cars this dam clean?” Yes, yes they were. Hundreds of dinner tables (cleaner than your dinner table cars) that were in attendance. I think this 86 was probably one of the most popular from the day. The cleanliness was on another level altogether.

Seiji, one of the few people I can remember owns this static S14. Every time I see it he has done something different. Making it lower and wider every time. You probably hate it, and I get that, but in Japan, a whole lot of people think it’s cool to scrape chassis. 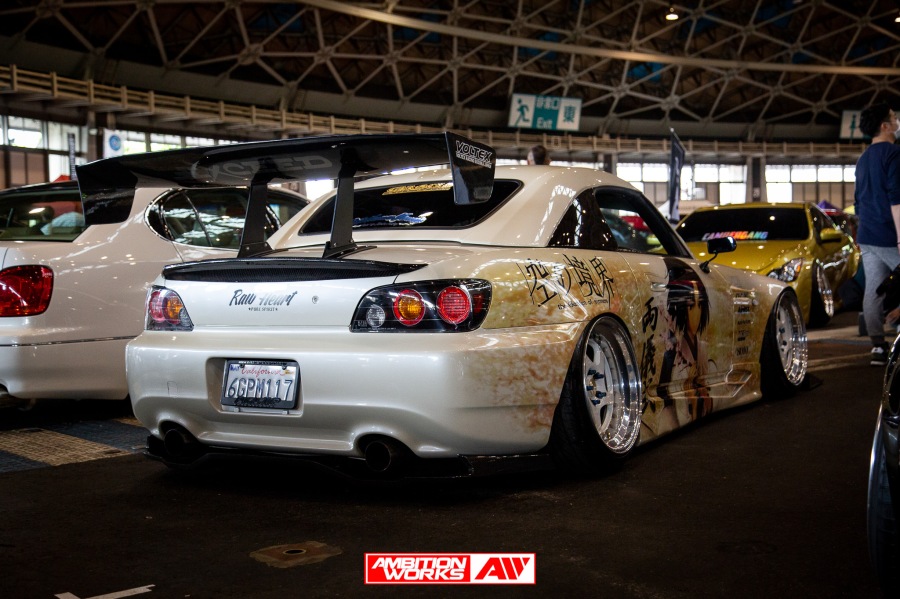 Back to the S2000s. I chose this one based off of its sweet anime plastered down the side wall. Most of the time I’m not a fan of Itasha cars. I once saw an R35 itasha in my city, and it just looked terrible. This, however, works. It’s not over the top, no hard colours, it blends pleasantly.

The event really made me envious. It makes me want to spend money and have my car looking as clean as these cars. I have to physically stop myself from buying stuff online after attending this event. I tell myself, no, you’re car is primarily for drift, will it help you drift? If not, then don’t buy it. Ahh, it’s a hard life.

This Soarer was a nice surprise, not so common anymore. Doesn’t it look so much better than the cars being produced today? Yes, it does! If you look closely at the fmic though, it’s not straight. Ohh that’s a point off in my ocd book of ocd things. 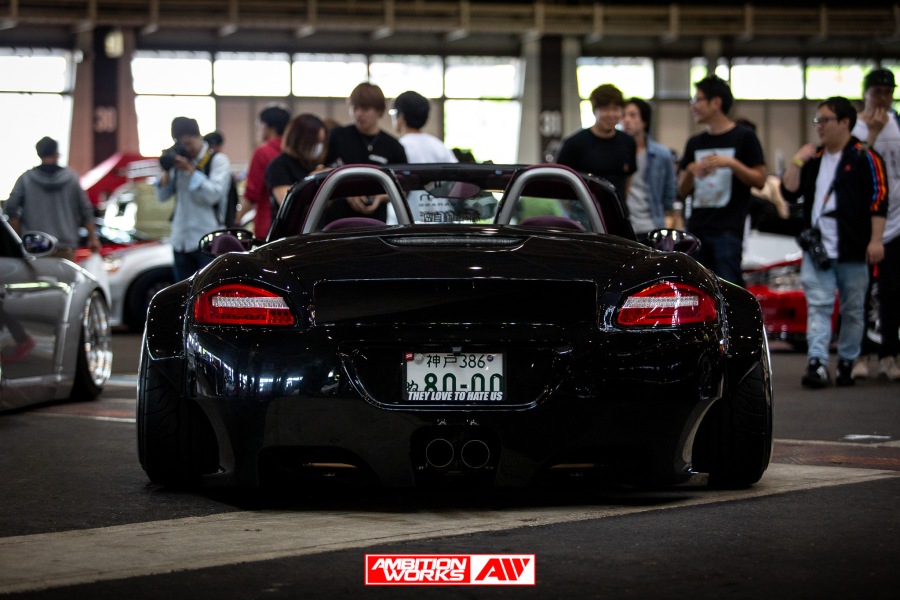 A few euro cars also made it through the doors, this Porsche was wide and crazy low. I feel like all functionality has been taken away at this point and it’s a car with the main purpose being to destroy the chassis. I could be wrong though, might have bags, who knows? 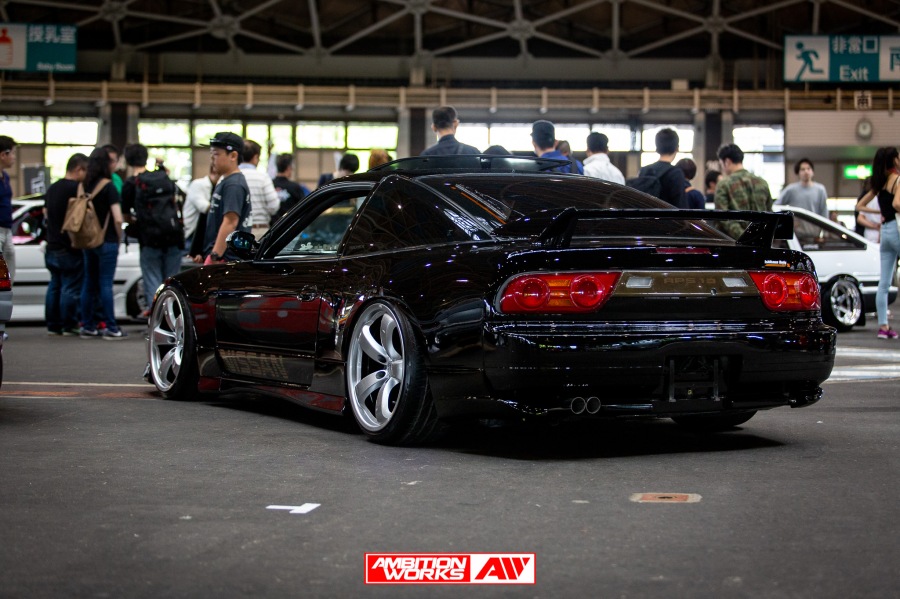 Here we go, my favourite S-Chassis at the event. All custom metal work on the fenders. No fibreglass, just hours and hours of labour. Riding on a set of Fairlady wheels really looked the part, I’d always wanted a set of these back in NZ for my S14. The only thing bad about this car was the engine work, hence why I took pictures from behind! 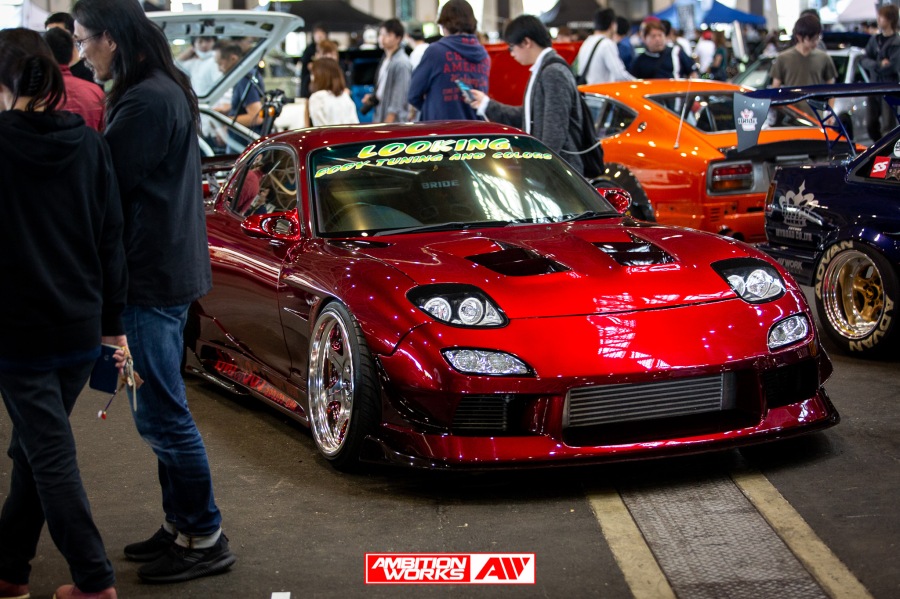 Looking! I think last year this car was also at this event, but it was black if it’s the same car. This has to be a drift car if it’s part of the looking team. I’d love to see this RX-7 smashing the limiter around Meihan sportsland someday. 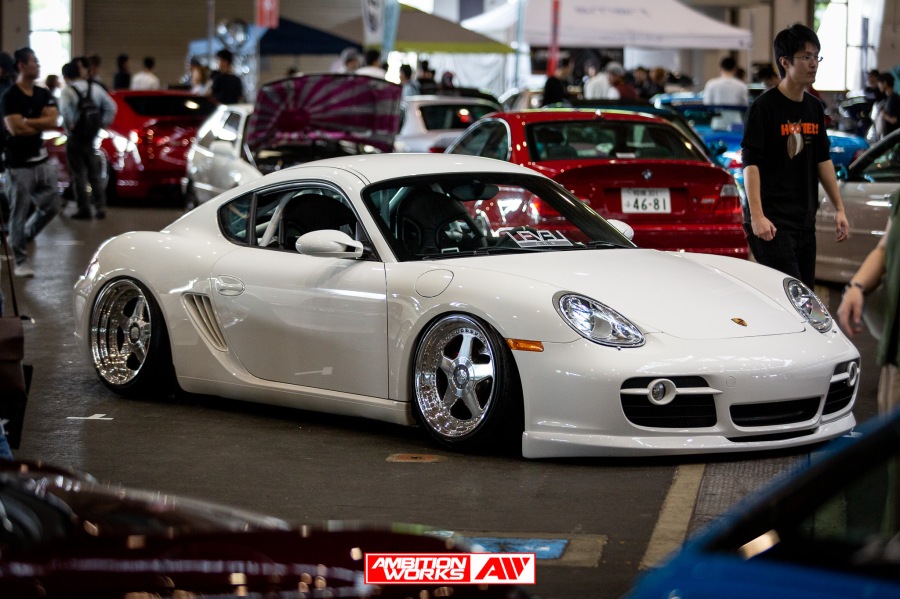 Ohh those wheels again! So that’s it, another year at Wekfest Japan done and dusted. Too many cars, just picking the 20 photos for this article was a job in itself. I look forward to seeing some of these cars out and about on the streets, hopefully in the same pristine condition!