In Japan at the moment, it’s really hot, I mean really hot. When I had a look at the news today, it said that for 45 days, the temp hasn’t dropped below 30 degrees in most areas of Japan. If you think 30 is a hot day, wait until you feel 30+ for consecutive days, it’s not fun.

We all know what happens to a car when it’s driven around in hot weather, OVERHEAT! Especially at the race track. This blog post will focus on the cooling system on Project Kouki and what I’ve tried to do to keep the temps cool while cruising the backroads of Japan. 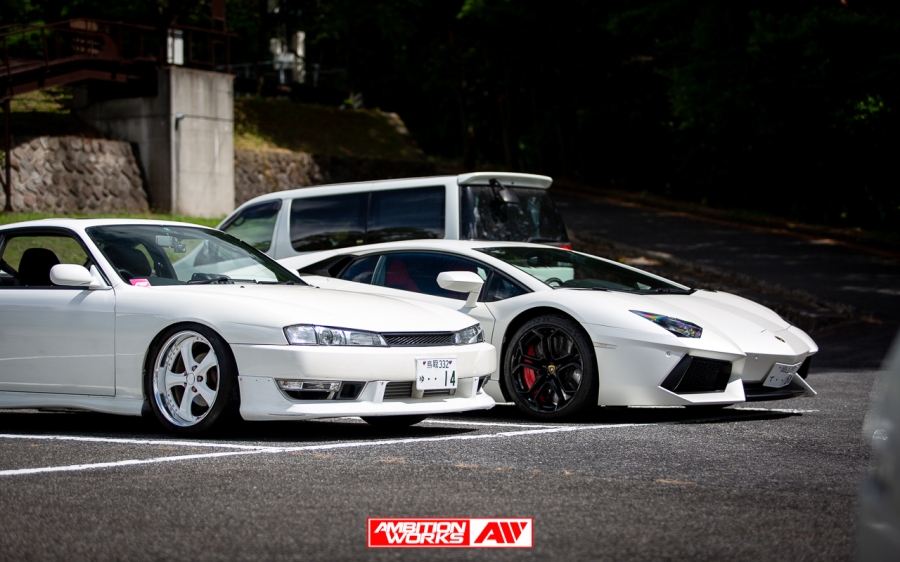 It really all started off with a day at Bihoku Highland Circuit. I would only get about 1 lap of drifting in before I needed a cooldown, bear in mind that this was in Summer. So I made a plan to keep my car cooler for longer in the hope that I would be able to do more runs before needing to do a cooldown lap.

I made a list. On that list, the first thing I put was the radiator. I wasn’t really going to go all out, but I did in the end, why not? The radiator was at the top, next was hoses, inlet/outlet pipes, low temp thermostat, and water pump. A full overhaul to keep the engine good for the rest of its life. I already had a bigger GP Sports cooling fan, so that part was okay.

Now that I had a list I needed to find some brands and compare what would work with my setup the best. I didn’t need crazy items, just items that had a little bit of an improvement over the factory stuff. The radiators that I put it down to were Koyorad, Greddy, and Blitz. Koyorad was a little more expensive but because they only made radiators, you might be able to assume they are better quality.

Once I had purchased all of the items, and the massive list with all the parts that I thought I was going to need, I was happy. Because once I had the car apart, getting to the shop was a good 10km round bike ride. Not something that I wanted to do, but ending up doing about 3 times… 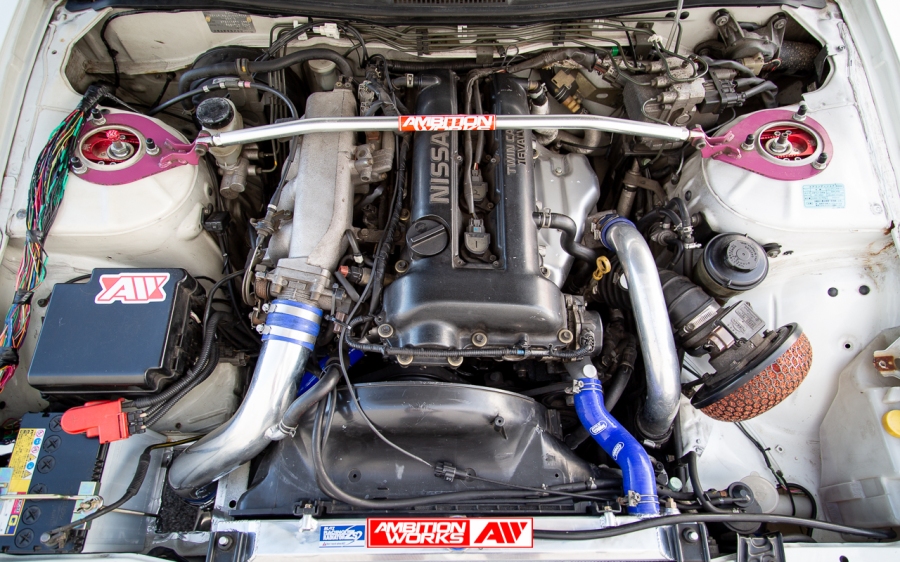 In the end, I went with the Blitz racing radiator type Zs, this was recommended to me by a friend in Yamaguchi who helps me out when we are drifting together. It was a direct replacement, came with all the parts needed, and I only had to cut a small part of the fan shroud down the bottom off to make it fit nicely. Very happy with the Blitz radiator, certainly the easiest part of the install.

Sadly I put the Blitz sticker on the cap on not straight, so that’s going to annoy anyone with some OCD tendencies. As you can see down there, I’ve also got the Blitz FMIC keeping the air going to my intake nice and cold. I actually found once I installed the FMIC, the airflow going to the rad decreased quite a bit, and in return water/oil temps increased a fair bit. I also wired up a switch to turn on the A/C fan from inside the cabin, however sadly I wired it wrong and it doesn’t work. I’ll have to fix that up sometime soon!

While I’m writing this, I actually just purchased a GT-1 motorsport cooling panel to place over the hole to try and direct more air to the radiator. It will go nicely with the GT-1 bash plate protecting my oil pan under the car. 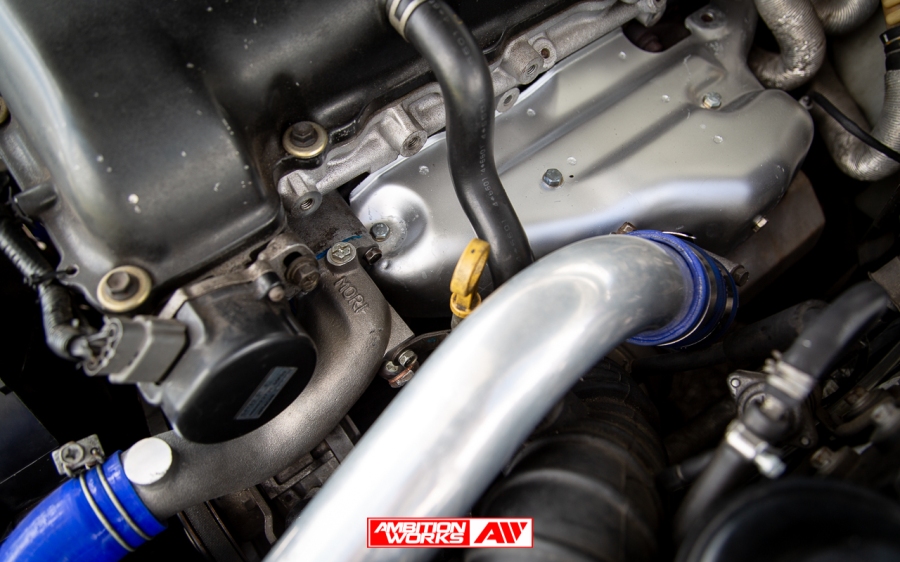 I think the biggest time taking point of this process was the outlet pipe. I had broken off the air escape screw on the factory one and didn’t want to fix it. I went looking and found a company called AS-MORI that makes new ones, without the pipe decreasing in size like the factory one. However, because it doesn’t decrease in size, screwing in the bottom bolt became an issue. I had to cut out some of the mounts to fit it up correctly. I feel like everyone who purchases this product would have this issue, and I’m not sure why it hasn’t been altered yet. While I was at it I also painted the exhaust shield in a nice heat-proof silver. Simple things make a world of difference.

For future preparation, I moved the washer bottle to the other side of the car. Moved the wires over, and made up some brackets. Works good, the tyre doesn’t hit it, easy to fill up. I’m thinking next year that I will get an oil cooler and put it where the washer bottle usually goes. That will make it close to the oil lines, and also being between the rad/fmic would just not be a great place. I’ve left a small gap here also for some air ducting that I’ve purchased from Juran. I’m hoping that running a duct from the front bumper, towards the air intake will push in more cold air!

While I had the car apart I also took the opportunity to get my grinder out and fix up the fmic piping holes. Both sides were too small and had the piping touching the car. On this side, I cut it very big to allow for future oil pipes to reach the oil cooler, painted the freshly cut metal, then put some aluminium tape over it for protection. The other side I made the whole just a little bit bigger so the pipe could move around a tad, and then did the same process. Paint and tape.

One thing that I wasn’t too sure about replacing was the water pump. I didn’t think that the water pump was bad in the car, and they are not the cheapest things to replace. In the end, I decided to buy a genuine Nissan replacement. I thought, better to be safe than sorry. Cleaned the surface on the water pump, and inlet/outlet pipes, then refitted with a nice layer of silicone. To get the water pump off was a little tricky. The bottom bolt on the alternator didn’t want to play nice. I had nearly rounded the nut, biked to the shop twice to buy new tools, and then finally with the right tool and a big hit with a hammer knocked it loose. Most certainly did not reuse that nut again.

I went with the Samco Sport pipes to replace the factory once. Very very thick and high-quality items. They were a little too long to go on, so I cut the top one shorter, and just pushed the bottom one higher up the inlet pipe that it attaches to. Problem solved.

Really happy with the radiator. It’s about 10cm thicker than the original s14 one but still fits in perfectly. Doesn’t rub on anything, just an easy pull out old one, put in the new one. The finish is nice, mounting points are good, logos are bold (apart from me messing up the cap). One thing I don’t like about it is they have changed the cap mounting part. It’s a little bit different from the factory once, so I couldn’t fit my Nismo cap. I had to use the Blitz one.

The whole process took me about 4 days of full work. I actually did some other stuff while I was at it like moving the wiring into the engine bay which took a day in itself. Moved the washer bottle, cleaned the engine bay and block, painted heat shield, fixed up some rust etc. If I was to have just replaced the cooling items I think it would have taken about 2 days total. Once it was all back together, and I had filled it with coolant and water, I started it up with my fingers crossed. This was the first time replacing all of this stuff on this car and in my life. I’d never done it before. So yes, I was nervous.

Sadly I had a leak. Coming from the water line going to the turbo from the water outlet pipe. I had reused the old washers which should be 1.5mm each but were only 1ish mm and heavily damaged. Bought me some new washers, installed them, and no leaks at all! After some driving around it was very easy to see the improvements in the cooling. I’m looking forward to hitting up Bihoku and see just how much better it does than before.