My favourite place: the parking area. Why, might you ask? Well, let me tell you. This is the place where everybody parks their cars. You might be thinking, “Well, obviously”. I’d agree with that thought too if the cars were just ordinary cars. This parking area, however, is not for the ordinary car; this is a place for the extraordinary.

The recent Doridore extravaganza was not only a drifting event but also a hardparking showcase. It brought cars from all over Japan to Suzuka Twin Circuit in Mie Prefecture. This article is to show you, at home, some of the cars that I found interesting sitting in the parking area. First up, we have this stock-body Integra, painted a nice shade of cyan and sitting on a set of Porsche wheels; that’s the first time I’ve seen that combo!

From clean and simple to out of this world ‘Need for Speed’ spec. There is just no half-assing stuff in Japan; it’s go hard or go home. I spent a few moments taking a closer look at this G35— I’m sure you can see why. The owner has gone the extra mile to do every modification under the sun. I’m actually surprised that the spokes aren’t painted chrome with spinners attached.

Let’s take it back a decade or two. My knowledge of anything pre-1990 is rather lacking, so to fix this, I took down the details of these two cars to learn a thing or two. On the left, we have an X70 Toyota Chaser Avante, and on the right an X70 Toyota Cresta SuperLucent. From afar, they look identical to the untrained eye. But as I looked at the finer details, the differences started to appear.

Fast forward a decade or two, and we have the new generations of the Chaser and Cresta, where the style is now “slam the hell out of your car and don’t worry about your chassis”. If they are running air suspension, nice. If not, well then, they are devaluing that car faster than they know.

This! Easily my favourite Silvia in the parking area. No other Silvia came close to looking this rad — how would you? It looks fabulous. The factory body panels are coated in a gorgeous black that makes the extremely massive gold and chrome Work Vs wheels stand out like a foreigner in the countryside of Japan. 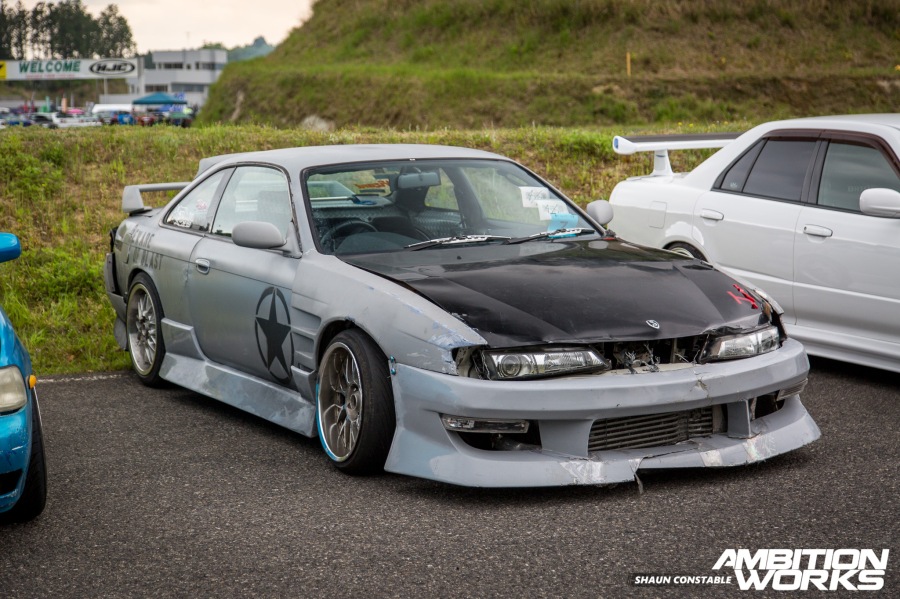 Looks like bringing trash and parking it on the track is acceptable. It’s not actually trash, that’s a bit harsh. The owner most likely has a thing for army spec thrashed styling. That’s all well and good, but does not, however, float my boat. Maybe a little more attention to detail and a little less of the not-mounted-very-well parts would make it look more attractive.

This 180SX has the right idea. It’s a bit of a mash-up, but everything is mounted okay(ish) and the panels are all in good(ish) condition. Wait, did I say 180SX? Look at the back, it’s actually an S15, with a 180SX front. A “Onevia” for short. Sometimes changing the face to an older version of the same model of car doesn’t work so well. Here though, I think the owner has done a great job of merging the two together.

Our friend Nakase made the trip from Osaka in his Kanjo spec Honda Civic. One day I’ll have to ask him to take me around the Osaka highways to feel what it’s like to be in a high revving Honda. 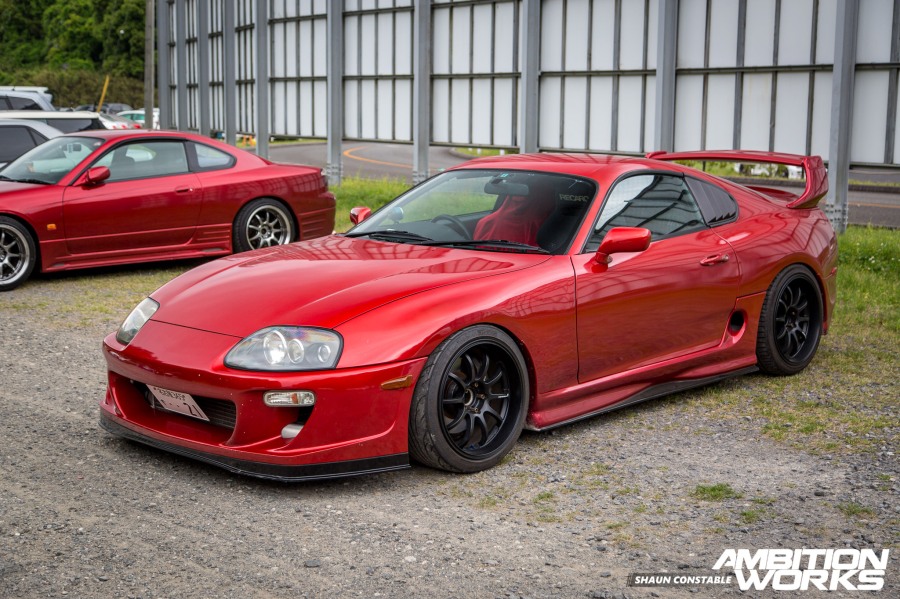 Another red car that caught my attention was this Supra. Tastefully modified, in my opinion, and going with a black and red theme that continues to the inside of the car. Sadly, Supras aren’t such a common sight in Japan — or the place where I live, anyway. Maybe they are all in hibernation, waiting for the summer festivities.

I actually followed this group of GT-Rs to the circuit for a little while. This was a moment when I stopped and thought to myself “I’m in Japan, driving a drift car, behind a crew of GT-Rs.” The thing that I had been doing in games since I was a little kid, I was finally doing in real life. Although these are all road registered, looking at the gutted interior of the first and second ones points to the idea that they might dip their toes in racing every now and then.

Let’s get away from the toys and finally look at the true beasts of the show. It looks like it will gobble you up if you make eye contact the wrong way. It’s a bright pink, tarmac-touching, deep-dishing, intercooler-cooling, piece of machinery. It may not be to everyone’s tastes, but the amount of effort put into it is worth some respect.

I’m not sure what to think about this G35. Which do you like better the green one or this one? Which one would you drive around your town as a daily? Surely it would have to be on air suspension to be this low. If it was, I think I’d pick this G35 over the green one.

This style is always interesting to look at. A friend who lives around the corner from me also has the same style of car. I asked him, “How do you drive this?” He said “I only drive it at night, and it constantly scrapes the ground.” He recently got shaken for it, so maybe this style doesn’t damage the chassis as much as one would think. 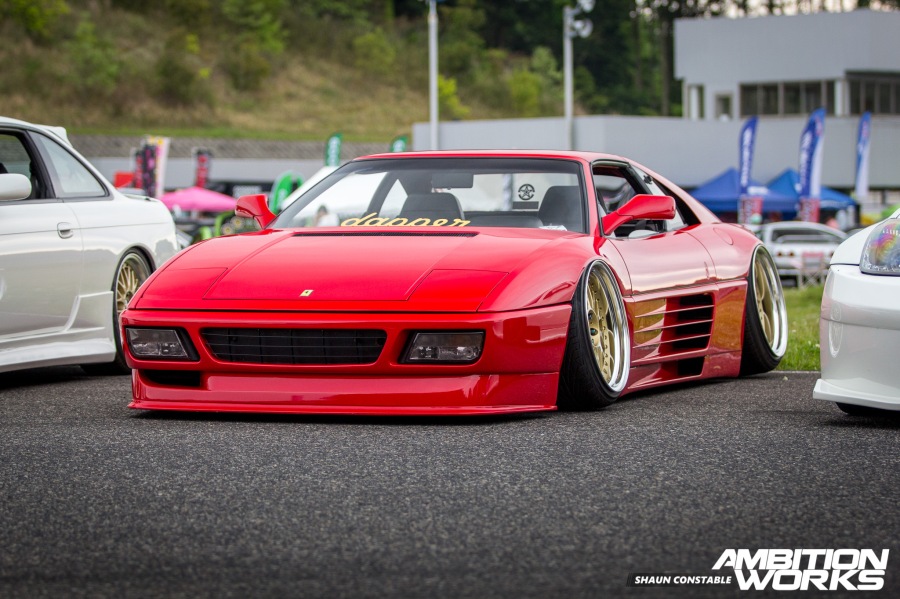 What was your favourite car? Remember to look at our Facebook page because we always upload an album with extra photos in there. The S15 and Ferrari take out the top spots in my book. The quality of these cars, as well as the commitment behind having such a pristine looking car, is what put them there.