On my most recent travels to Bihoku Highland Circuit in Niimi City – Okayama, I managed to find a few interesting drift cars smoking their way around Course B. This first one we are going to have a look at is something different than the usual Silvias and Skylines that live at the circuit. 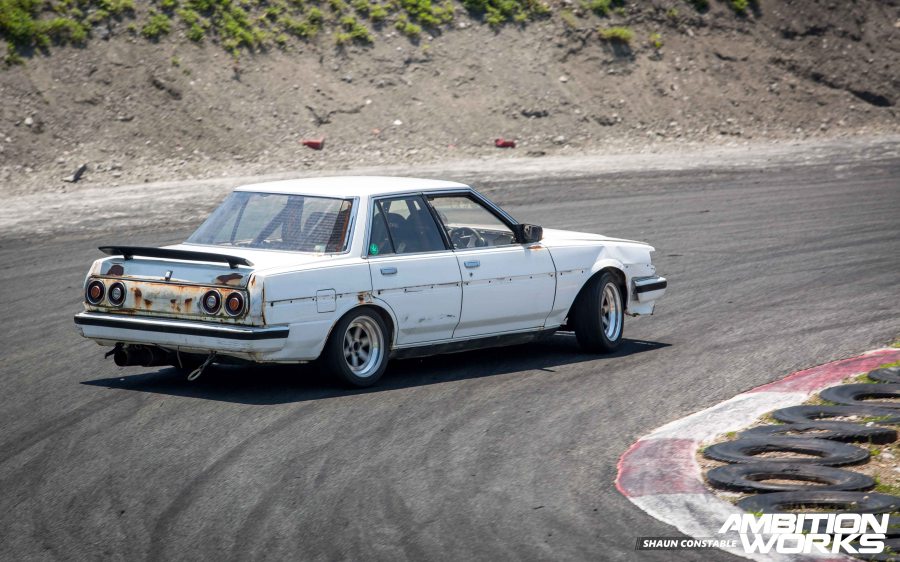 What you see here is a Toyota GX71 or Cresta. Sharing similarities to the Chaser and Mark II, the Cresta (X70 series) was produced for 4 years from 1984 to 1988. It started out with an upgraded 2.5-litre diesel engine, and then in 1985 the option of a turbocharged 2-litre engine became available 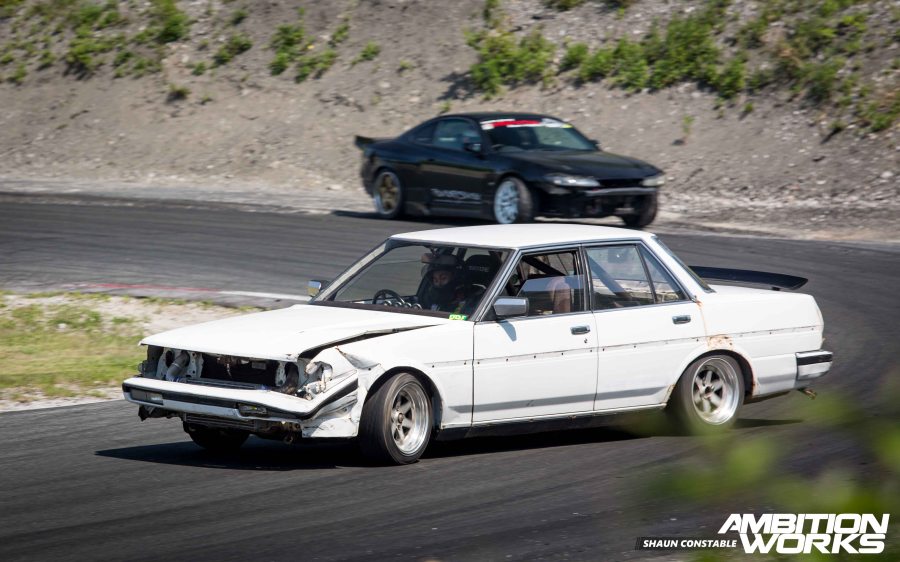 Although there isn’t much left of this example. If you weren’t a hardcore Toyota 80s fan, you’d have a hard time placing a model name on this beautiful bucket of rust. The lack of front lights, and the much too common 4 door square body of 80s cars would make it somewhat difficult to identify. 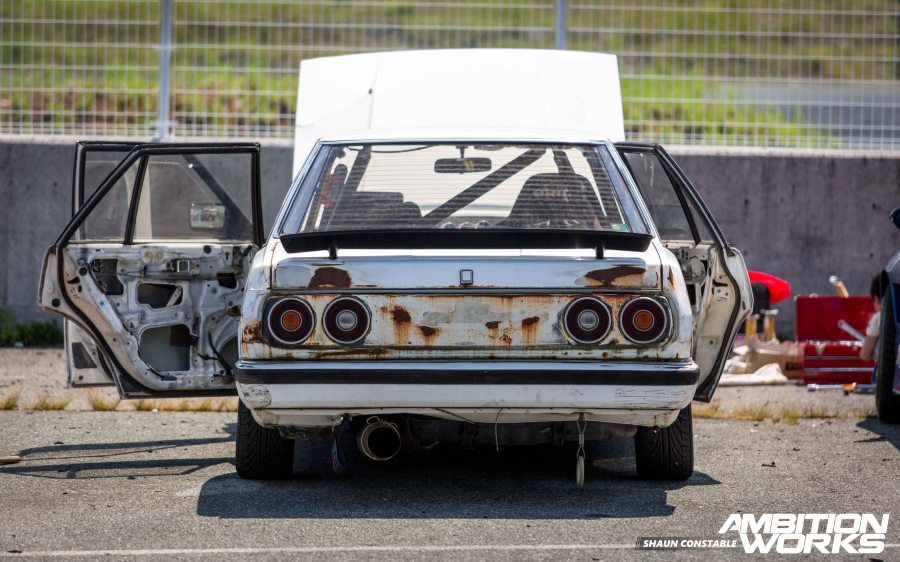 While looking over this car, it was like deja-vu. I felt like I had seen this car before, but where? It turns out that I had been drifting my S14 at the same drift day he was driving his Cresta 6 months earlier. I remember chasing him a few times, but he was an erratic driver back then and spun too much, I suppose that’s why we were both in the beginner class. 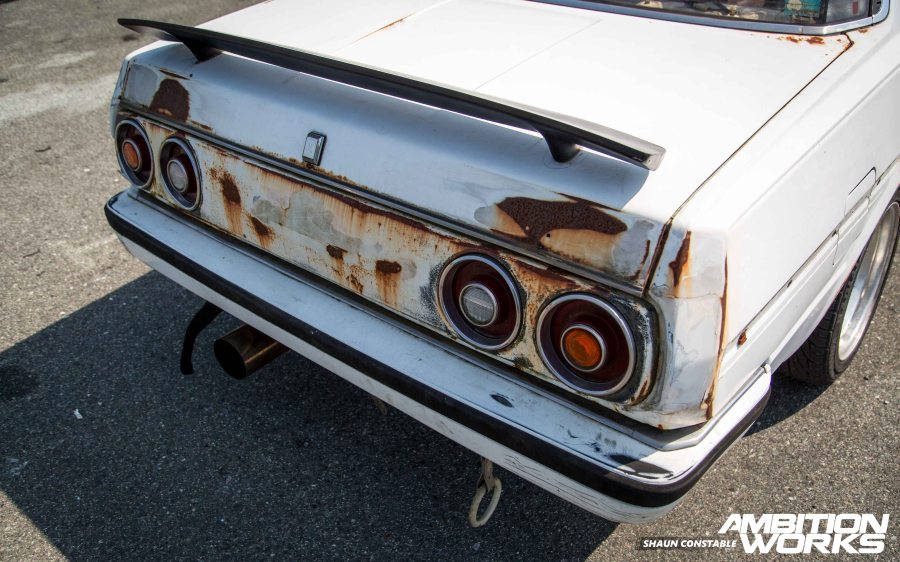 So, maybe you’re wondering what’s up with the rear lights? They are not from a Toyota that’s an easy one. They are actually from a C110 Skyline or as everyone knows it a ‘Kenmeri’. The name ‘Ken & Mary’ or ‘Kenmeri’ comes from an advertisement campaign for the car during its release in the 70s. A young couple (Ken & Mary) who relaxed and enjoyed the countryside in Ken & Mary’s Skyline. Due to the fact that a Kenmeri is older than a GX71 Cresta, does that make it an ‘ass drop’? 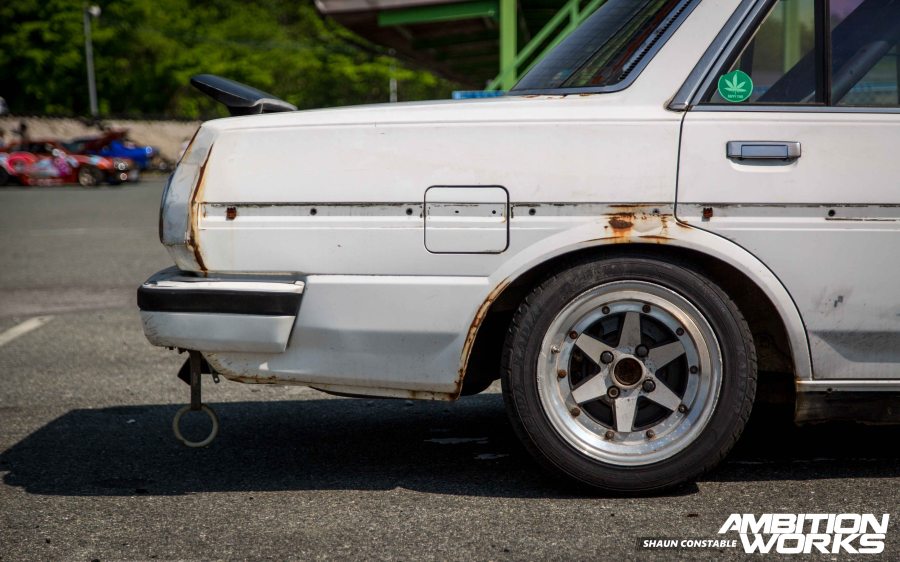 The old school styled body trim has been removed for weight reduction(?). The rear bumpers on cars from the 80s are sure very small. Looking at bumpers these days, the whole rear end of the car can be considered as the rear bumper as they are just so big. Also, the obligatory tsurikawa is hanging from the rear tow hook. I tried doing this on my S14, but it was just constantly scraping along the ground, which made for a surprisingly unpleasant daily driver. 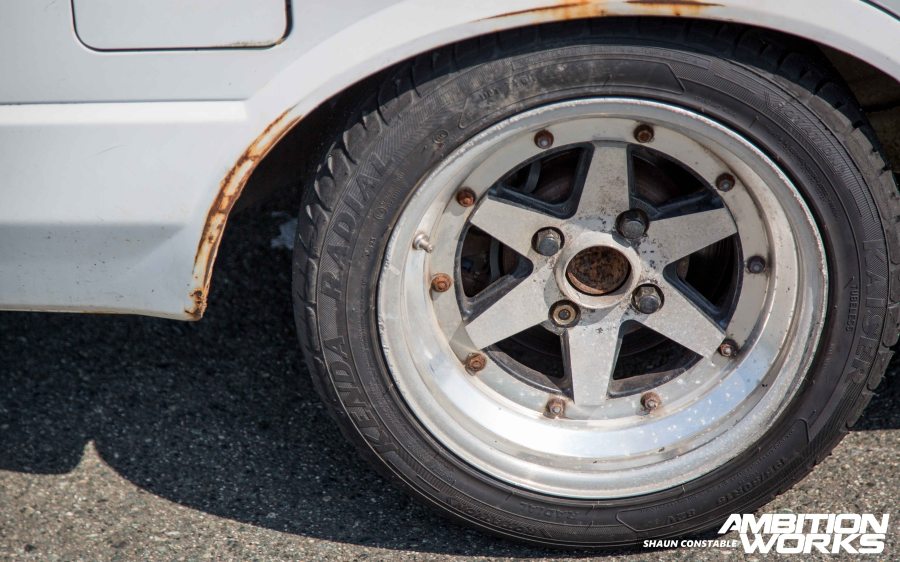 The rust filled body is rolling on a set of 15 inch SSR Longchamps with some nice Kenda 195/50 tyres to burn through. Even the nuts holding the two pieces together looked to be rusted shut, along with the wheel studs. 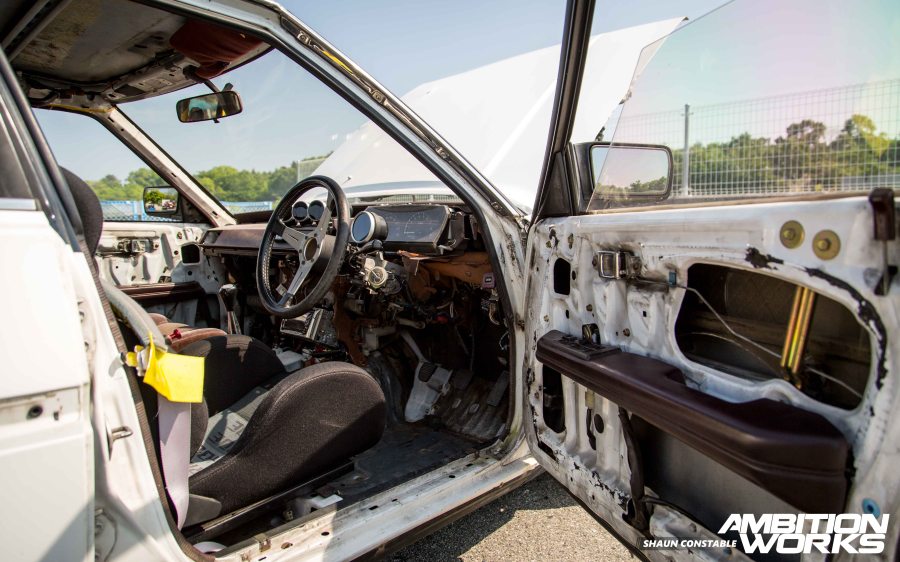 Moving on to the interior, its basic. Anything that isn’t needed has been removed, only the necessities remain. A Bride seat to cushion the drivers behind and an aftermarket steering wheel for the driver to grip onto has been added. As well as a set of gauges to keep the engine in good nick, it’s all you need really. 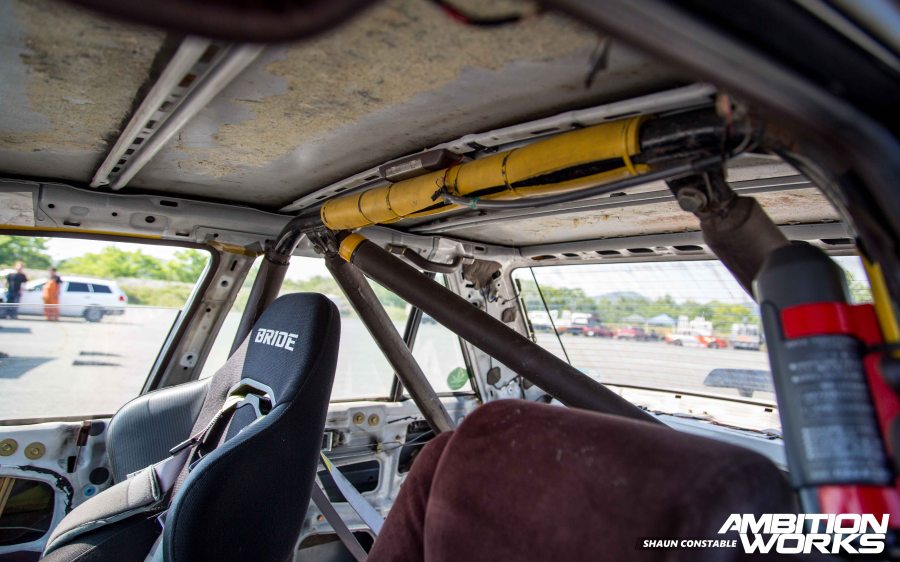 All the door panels and ceiling carpet has been removed, and in its place now sits a bolt in half cage in case the unthinkable was to happen and the car made it onto its roof. Seeing a car flip during this same day made me realise maybe having a half cage isn’t a bad idea, even a bolt in one is better than nothing. 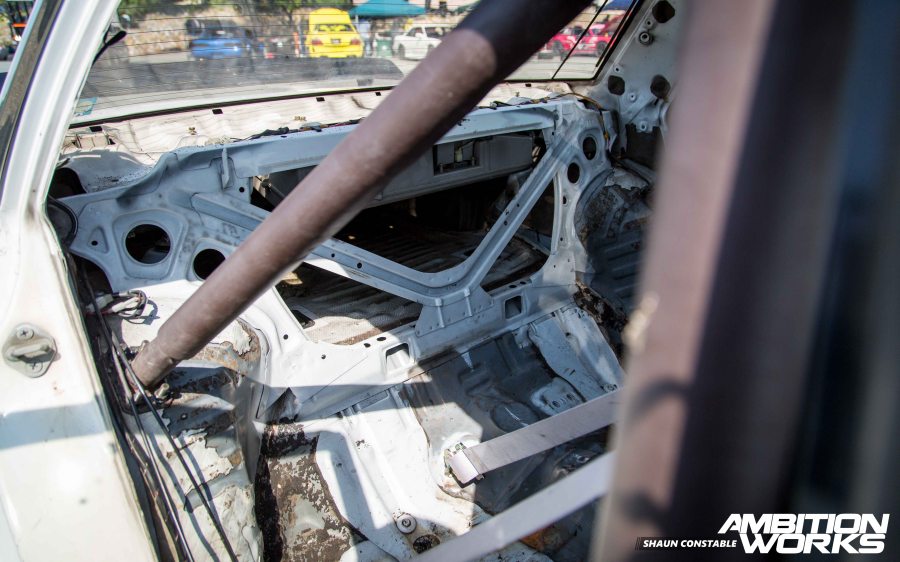 The back seats have also been removed to create space for the bolt in half cage. If you look closely, you may also be able to see that the owner has started removing the sound deadening, but then maybe gave up because the task was just too difficult. 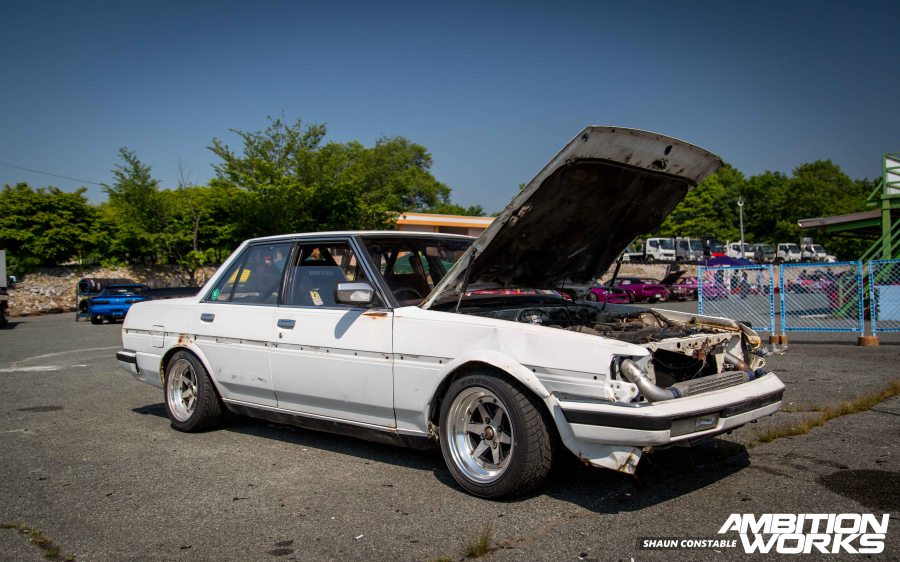 What’s powering this GX71 then? Why does it need 5 gauges to keep the engine in the appropriate conditions? Does it have one of the 2-litre engines from the factory, or does it have a new heart? I mean, 30 years with the same heart is a long time. 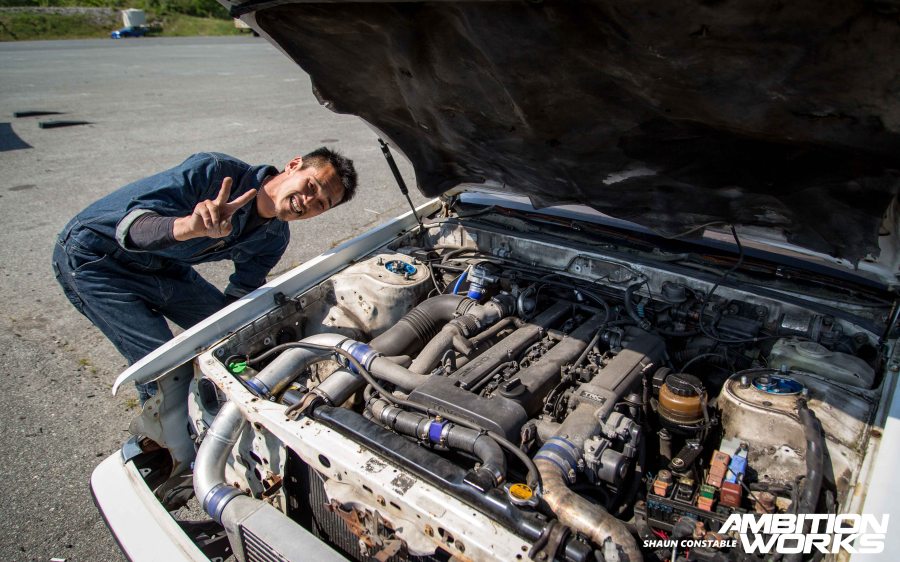 It’s a new heart! A Toyota produced 1JZ engine, 2500 ccs of fury. The fun doesn’t stop there though, it’s also a turbo 1JZ. If the original heart was a G series engine, the car would now have an extra 100hp or so. If it came with the diesel engine, it would probably have double that! 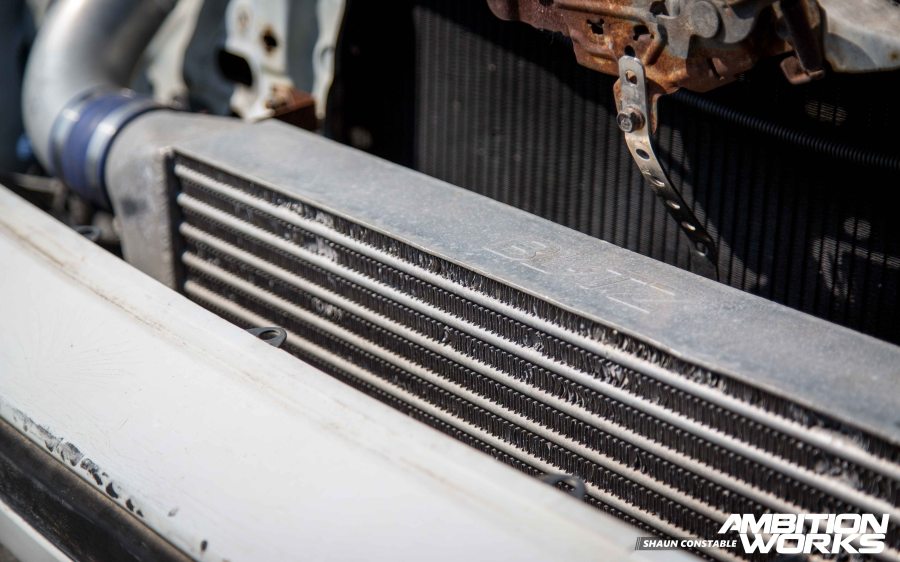 Sadly, we were not able to get any information on the actual engine itself, but we were able to have a scoop around to see what visible modifications had been done. I’ve been recently looking at FMIC setups from my S14, so I knew how expensive Blitz products were. Then to see a Blitz set-up right there, made me think maybe this guy does care about his car, or at least the engine. 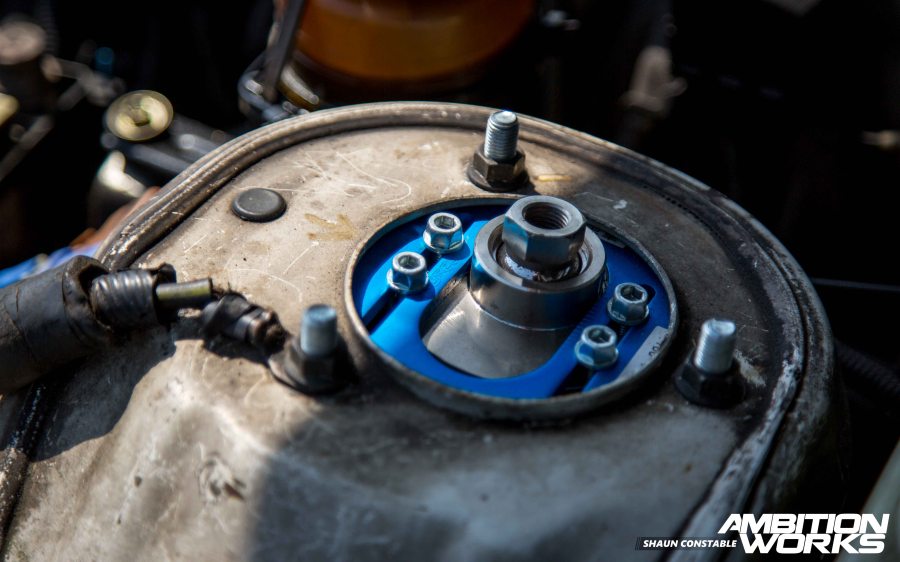 Keeping the car steady, or somewhat steady is a set of adjustable Cusco coilovers. Turn your eyes to the white paint around the top hat though. Can you even see the original white paint? And what’s this crazy ground wire doing going to one of the top bolts.

I think the lesson in this story is ‘it’s not stupid if it works’. This GX71 may look a bit off, (I think it has its own unique character) but it’s got the basics to be able to drift. An aftermarket diff, big engine, light weight, safeness, and coilovers. You don’t need much more to have a good day out at the racetrack than that.