I was in Tokyo again, the city that never sleeps, and while it wasn’t supposed to be a car related trip, some things just can’t be helped. I wasn’t too sure if there was going to be an event on in Odaiba this particular weekend, but thought I’d give it a chance anyway. I told my friend that I was being a ‘pretend’ tour guide and that Odaiba is a must visit place in Tokyo. She wanted to see the water, and what better place than the port? 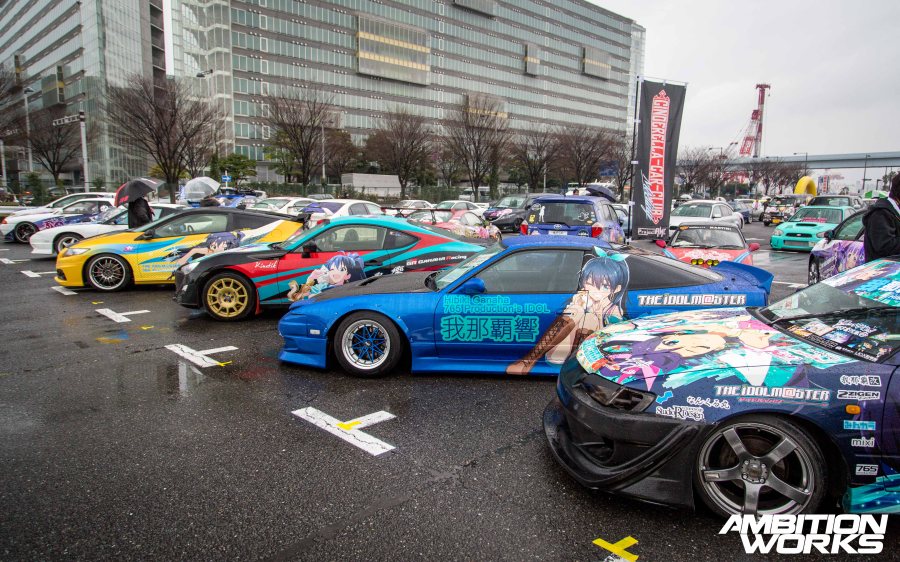 We arrived around 4:00pm at the train station in Odaiba, and made our way to the Odaiba parking area where the events are usually held. To my great relief, there was an event! It wasn’t just any event either, this was the 2017 Itasha Meeting event. It’s a side of Japan that you might only get a glimpse of in the Akihabara area of Tokyo if you don’t know where to look. Today it wasn’t just going to be a glimpse, it was going to be an overload of anime wrapped cars. 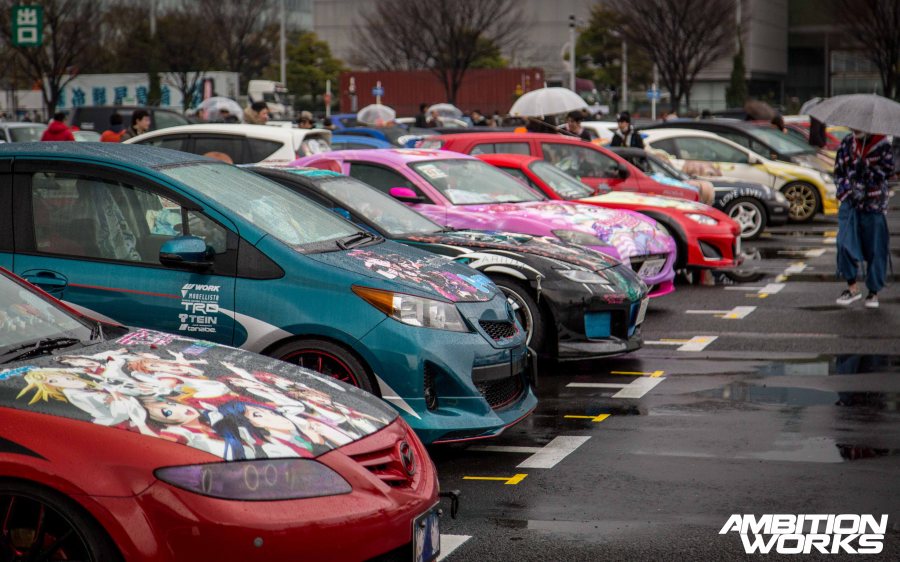 First, lets just look into what itasha is for those of you who don’t know. It’s a car that’s most likely wrapped using film with anime fictional characters. It’s been popular in Japan for years, you can even see it in the original Fast and Furious movie on ‘The Gangs’ JDM cars. Around the world, or in New Zealand anyway, the trend faded away for a while. Now though, it’s coming back all around the world, mainly slapped onto drift cars. 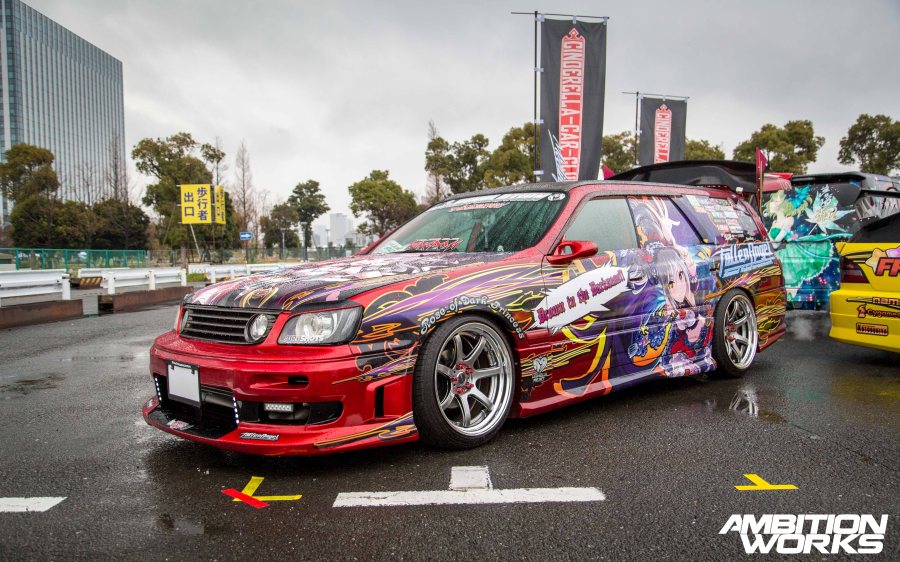 The word ‘itasha’, is made up of two kanji. That of ‘痛’ which is the kanji used in the adjective ‘painful’ or ‘itai’, and 車 – the first kanji I learnt, meaning ‘car’ or ‘kuruma’. As for Japanese kanji characters, there are many ways to read them. For this particular combination of ‘painful’ and ‘car’ or ‘itai’ and ‘kuruma’, we actually read it as ‘ita’ and ‘sha’ creating the famous word you all know, ‘itasha’ or ‘痛車’. 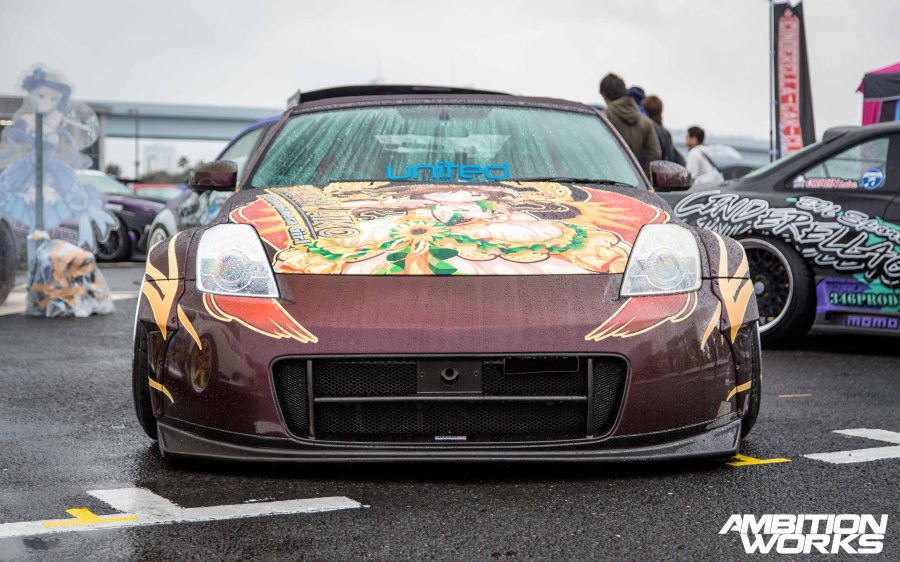 What does ‘itasha’ really mean though? If we directly translate the kanji to English, we are left with ‘painful car’, this is because some people consider these cars painful to look at. I can see where they are coming from, it’s a lot of colours and shapes to process. A simple one-colour paint job is a lot easier on the eyes. To the people that love itasha, it’s not painful to look at though, it’s just having anime slapped all over your ride. 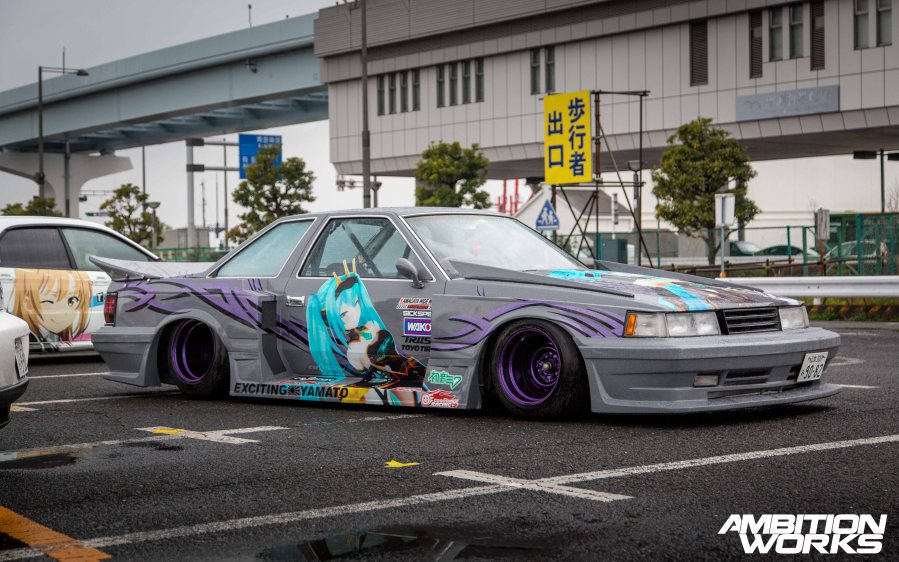 The main theme that most cars seemed to have was a main character on either side of the car, usually flipped so both sides are identical. Along with some writing, and background shapes, patterns, and colours to tie it all in. What do you think of it? Would you wrap your car with your favourite anime character? If I were to do this, I’m almost certain at my day job my colleagues would not approve, however the students probably would. 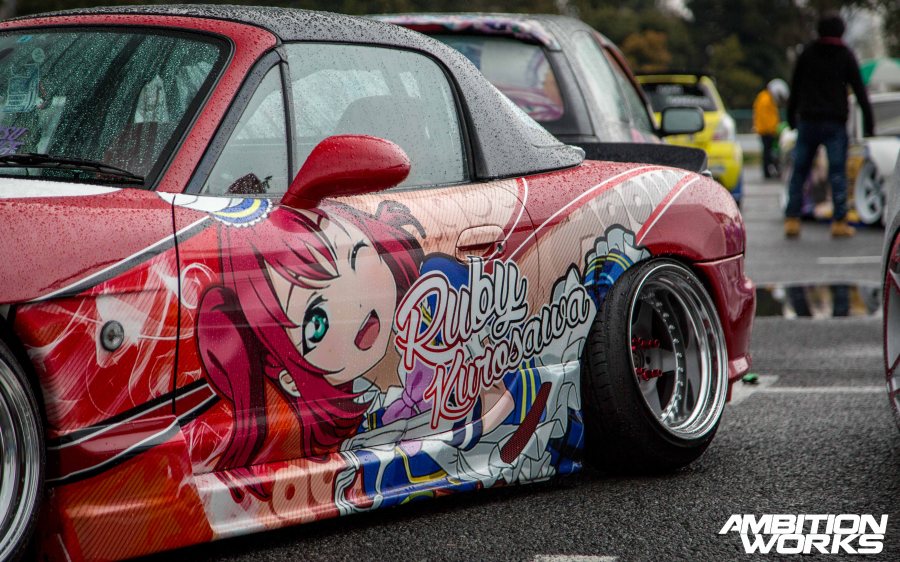 Personally, I think I’m a fan of the less extreme itasha, the ones with just the simple styling and matching colour combination. I like a clean looking car. Things have to flow and look like they should be there. Some of the cars at this event were just mind boggling to look at. Nothing really fit and it was like they had gone to D.A.D and purchased everything they possibly could. 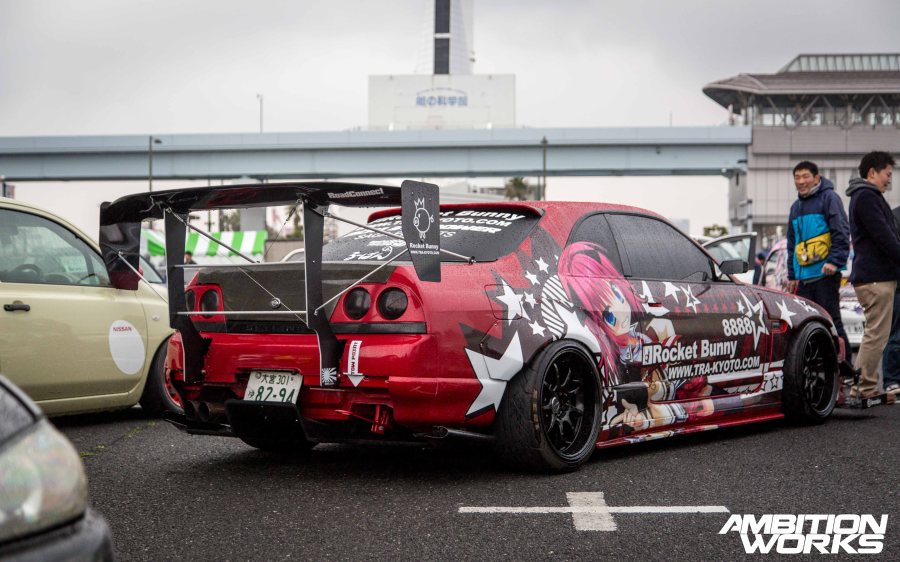 This R33 pulled my vision for a few minutes. It looked like a serious piece of machinery, with bolt on guards, wide wheels, diffusers, and a massive bolt on spoiler. If this R33 didn’t hit up the race track every now and again I’d be a little disappointed. If it is a race car though, it still has plates on it, allowing it to be driven on the streets. This would be a nice daily cruiser. 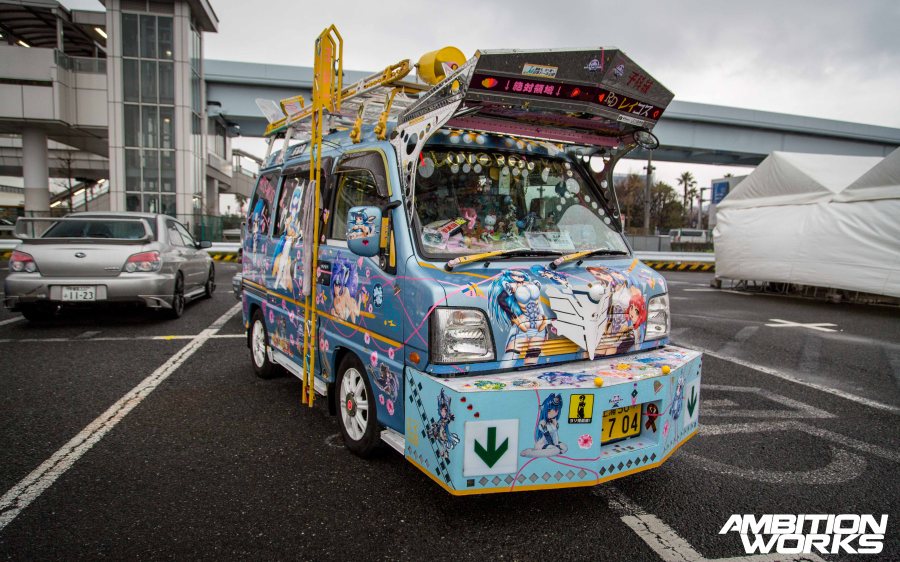 WOW – where did that come from? I just don’t understand what’s happening. This is the perfect example of an itasha car that’s just way over the top, in my opinion anyway. There is literally stuff everywhere! If you zoom in and look inside the cabin, there’s even more stuff! No clean surface in site. I wonder what it would transform into though? 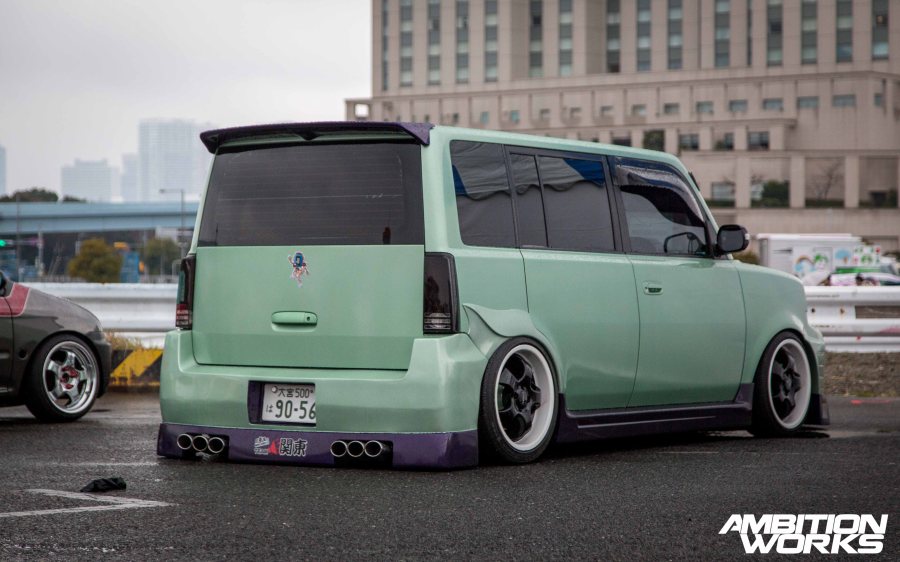 Among all of the crazy itasha cars were some non-itasha cars. Looking at these was like a break for your mind. The amount of effort it takes to constantly figure out what’s happening on each car is tough, so finding a clean car like this feels good. I’m liking the addition on the rear quarters of the flame-looking flares. Adds just a little bit of extra fire. 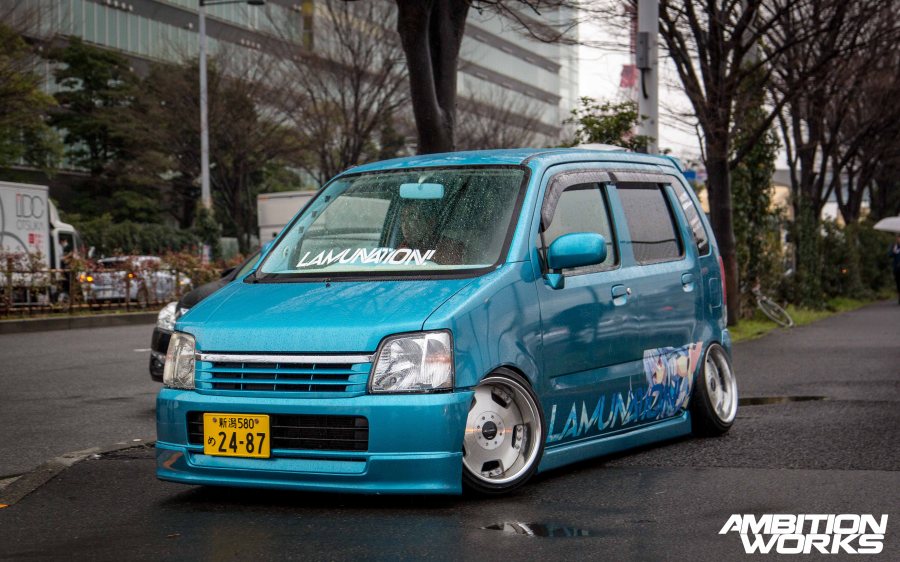 One great thing about the ending of these events is that the cars are so low they always struggle to exit, leaving half their chassis on the pavement. A quick walk to the exit proved that this event would be no different. Cars were trying 4, 5, 6 times, getting beached with open diffs, removing weight from the cars, and getting unnecessary run-ups just to leave the car park.

If you’re ever in Tokyo, and want to see this kind of style, but don’t know where to find an event like this, head to Akihabara one night. I’ll guarantee that you’ll see at least one itasha car driving up and down the street or hanging out in a brightly lit alleyway. If you’re quick enough, snap a photo, and show your friends. Some people have no idea that the itasha style exists, so spread the word, it’s an entertaining thing to experience.

2 thoughts on “Itasha Heaven: The Weird and the Wonderful”