With Formula Drift Japan Round 1 at Suzuka Twin Circuit coming to a completion last weekend, I thought I’d take a few minutes to explain some things I learnt while attending the event. We’ll have a look at 5 things that I found either interesting, or different to D1NZ (the national drifting championship in New Zealand). 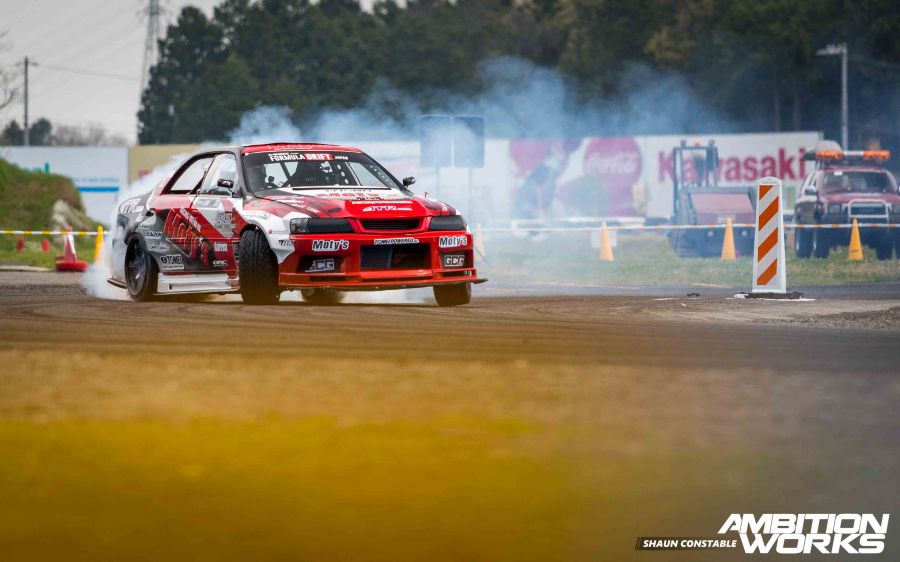 The first thing I learnt, there are no victory burnouts. This is a BIG thing at D1NZ in New Zealand, and the crowd absolutely loves it. It’s not only drifting either, plenty of other motorsport genres allow the drives to burn a set of fresh rubber to show just how ecstatic they are with their 1st placing. Why would FD Japan be any different? With the 1st, 2nd, & 3rd place driver’s cars on the track, it couldn’t have been easier for them to jump back in their car and destroy even their remaining tread. Maybe the Japanese are too tame for that, or maybe it’s never been a thing here. Only time will tell as I head to more and more events across Japan.

The 2nd thing I learnt, which is also a comparison to NZ, is that FD Japan is expensive, for spectators that is. To get to Suzuka Twin Circuit from my house, it’s about a 5 to 6-hour drive, half a tank of gas, or 25 to 30 litres. That’s about $40USD in gas. The tolls alone cost around $75USD one way. So if we add that up, it’s already hitting $230USD return. Accommodation on top of that for two nights $120USD, and then the entrance fee $45USD (If you don’t pre-purchase tickets) plus parking for each day $15USD. All up, around $500USD including food and drinks just to view one round of FD Japan. However, if you bring 2 or 4 people, the cost can be split, so the lesson here, don’t go to FD Japan alone. Don’t get me wrong though, the event is totally worth the cost! 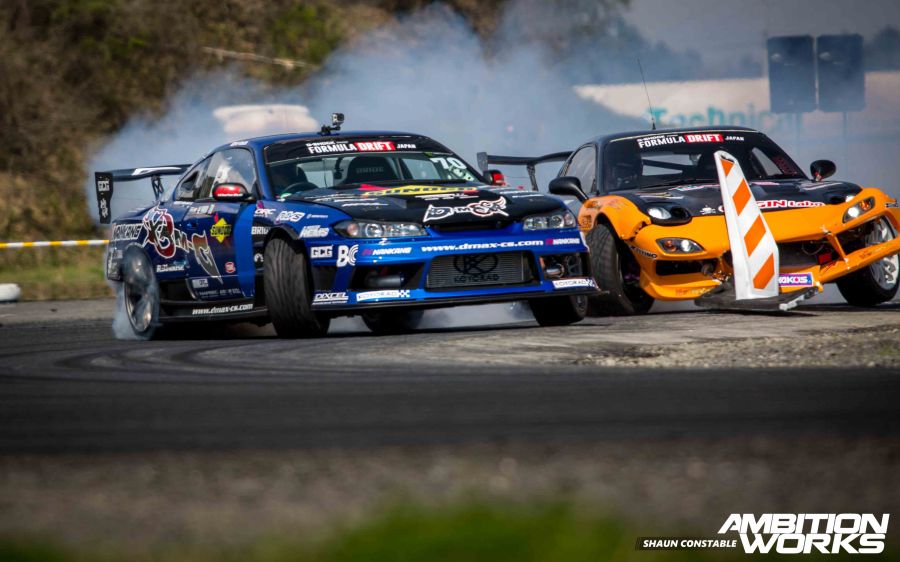 Walking through the pits, and peering in the windows of all the cars brought me to my 3rd thing that I learnt. The cars still have a lot of factory parts in the cabin. Let’s remember, these are cars that are competing in Japan’s number 1 drifting championship. A lot of them are still running factory hand breaks, original passenger seats with normal seat belts. Full dash, with only an extra gauge or two. I think, with a little tweaking, some of the less modified cars could probably even be road legal. 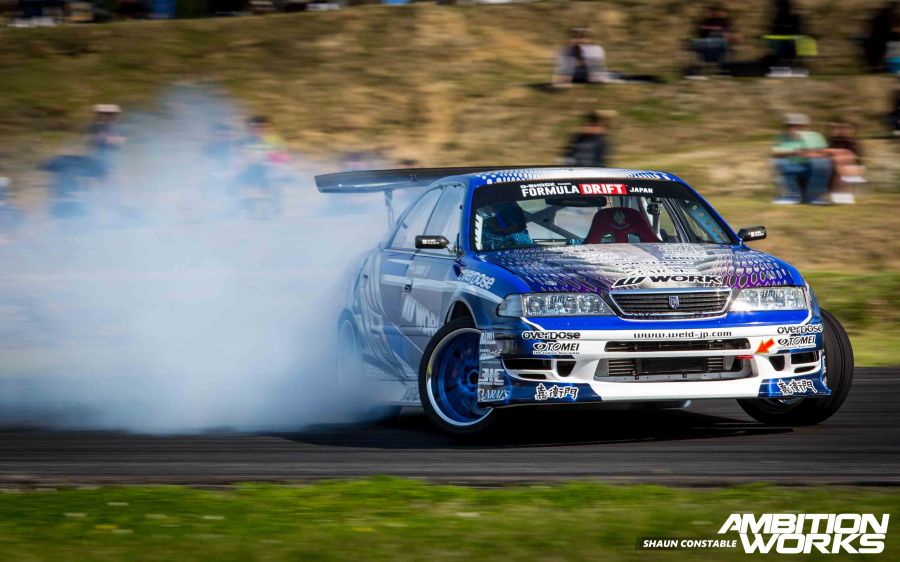 Being my first time as an official ‘media’ personnel at a race meeting in Japan, I wasn’t sure what to expect from other ‘media’. By that I mean, what kind of equipment they would have. What a difference it was from New Zealand, bucket loads of money had been invested into other people’s gear. No bottom or middle line camera bodies, no variable aperture lenses. It was all top of the line, easily over the $10,000 mark for most of the people that I came across. In New Zealand, using a 5DM3 and a 60D with a 70-200 plus 24-105 and a 2x extender is considered rather good. Here though, in Japan, I felt like I was at the bottom of the food chain again, these guys had 1DXs and 400s, nearly everyone had monopods for their gigantic lenses. Just need to remember, it’s not the gear that makes a great photo, it’s the person behind it. 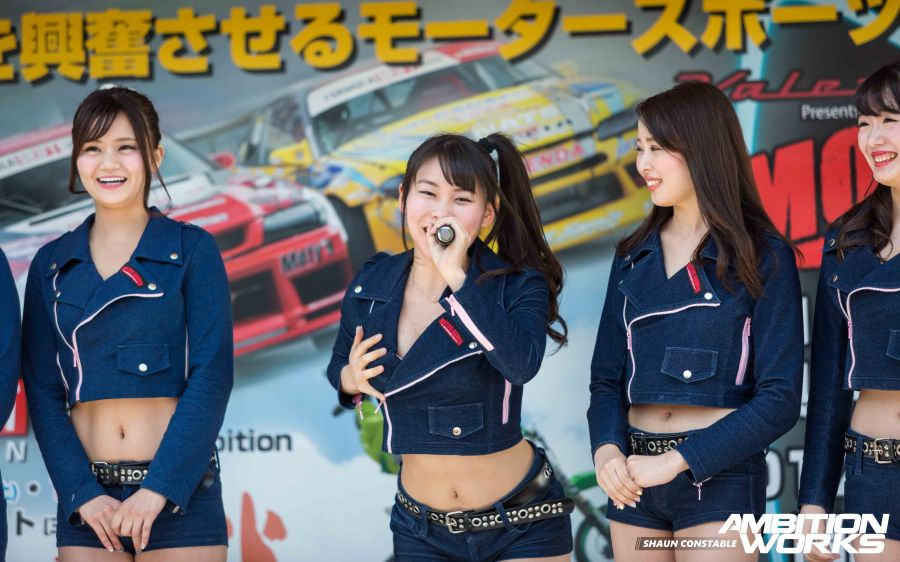 Last but not least, I learnt that the ‘promo chicks’ or ‘race queens’ have a big part in the event. They have their own time slot of 15 to 20 minutes on the main stage around lunch time, where all of them get to introduce themselves, pull a cute pose, and try to gain the most attention possible from the crowd. The Japanese photographers, or maybe I should just say ‘photographers’ had a field day. Although I’m sure most of them were taking appropriate photos, I think one or two weren’t pointing the lens at the ladies faces…

Stay tuned for more updates from Formula Drift Japan. I take a walk through the car park to see what’s present, we’ll introduce our favourite drivers from Round 1, talk about the ‘vibe’ of the professional drifting in Japan, and do a quick round recap of who won, and who has what points.