So far we have been to Tokyo, and experienced what Daikoku Futo PA and Tatsumi PA had to offer multiple times. We now had a chance to visit Osaka and see just how well it compared to the Capital of Japan. It was a normal weekend – a finish work on Friday afternoon, start work on Monday morning kind of weekend. There wasn’t any time to waste, so straight after work we headed to Osaka in the S14 to meet our friend who would be hosting us for the weekend. We were excited for a weekend filled with automotive mayhem. 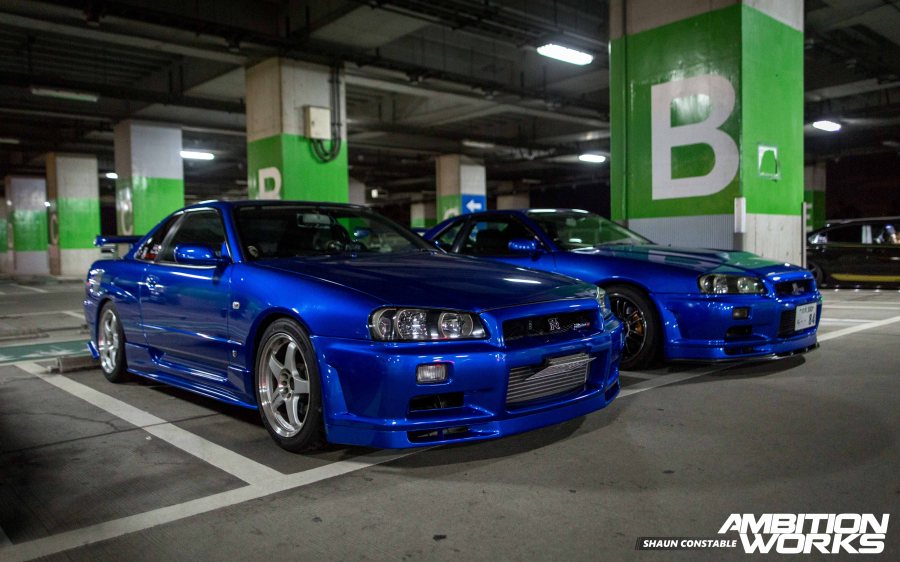 Friday and Saturday nights were when we ventured out into the darkness of Osaka, and the various brightly lit toll roads that awaited us. Friday night we only visited one PA (parking area), Higashi Osaka PA, as I didn’t arrive in Osaka until late. Organised by a car enthusiast with a powerful looking R32 GT-R. This night we also picked up our friend from Kanto Club who just arrived in Japan so we could show him what true epicness actually looks like. 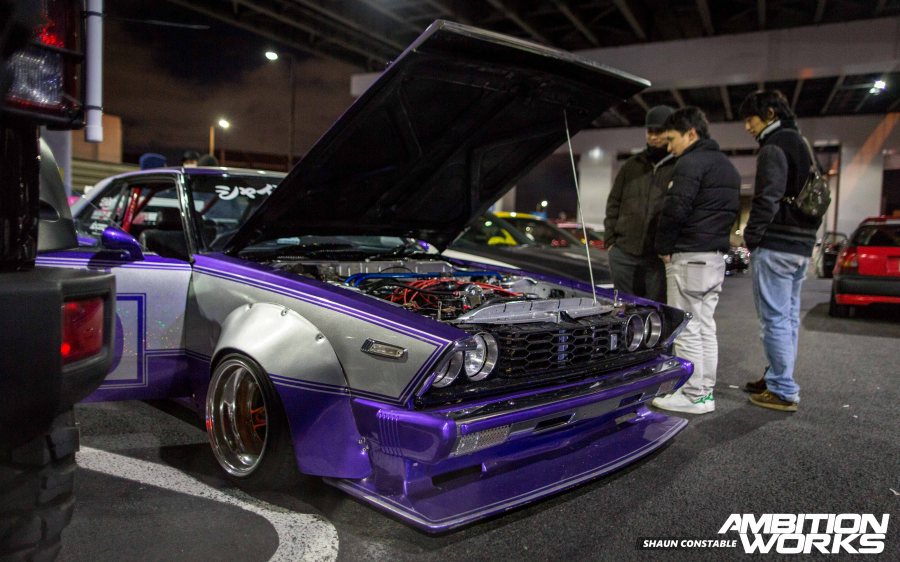 There were all kinds of rides present, we saw a few Lamborghinis, Ferraris, slammed VIP cars, American lowriders, fully modified Priuses, your usual drift Nissans and Toyotas, plus much more! It was a good way to start the weekend of automotive hunting off. 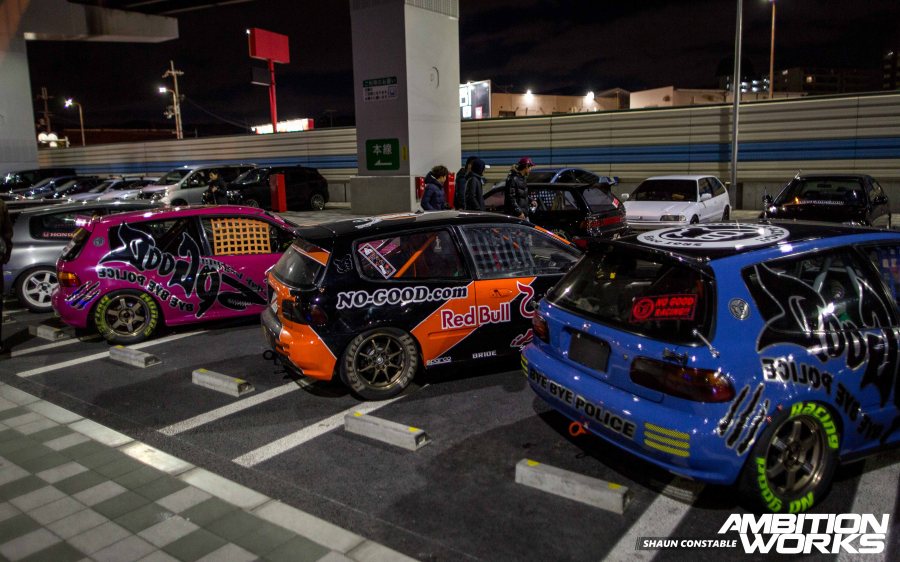 After dropping our New Zealand friend off at his accommodation, we drove in and out of the small streets in the Dotonbori area, which I have to admit, was truly epic. The night ended with us going out to watch some locals attack the commercial roads around USJ, and to watch the infamous Bosozoku tear down the straights. Finishing at about 4am, we only had a few hours of sleep available before heading to Osaka Auto Messe the next day. 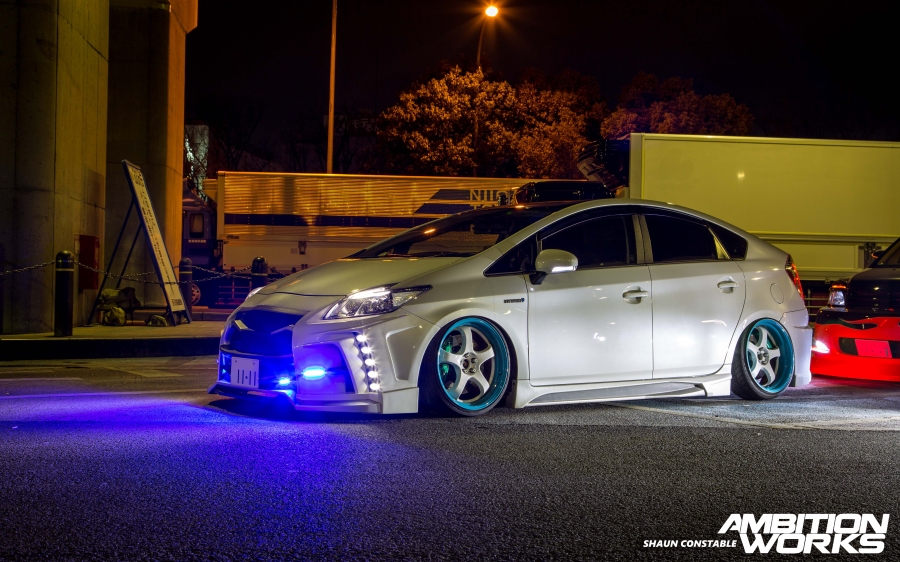 I think I can call Osaka my second home in Japan, I’ve made a whole lot of friends here through car shenanigans. The second night out was not going to disappoint; I was hoping to meet even more new people. We had planned on going to three different PAs this evening, so there was no time to waste! Apart from eating karaage (fried chicken), there is always time to eat karaage in Japan, especially home made karaage.

Saturday night started around 9 or 10 pm. After eating a massive plate of karaage of course. We didn’t take the S14 as we were advised against it, therefore went out in a stylish SUV. First off we headed to a Prius meet at Suita Parking Area. Sadly there were only about 5 or 6 there when we arrived. Apparently, we were too early, even though we were about an hour late. We took a few photos there, had a talk to the organiser, then exchanged business cards and went on our way to the next location.

These photos are in a very random order for this article, just so you know. The next parking area we went to was a Honda Civic meeting organised by ‘No Good Racing’. WOW! We had never seen so many Civics in one place before – absolutely breathtaking. There were cars displayed on the footpath, people selling stickers, and crazy drivers limit bashing their VTEC engines under the highway.

At this point, we were asked if we were Speedhunters by a random Japanese guy. Obviously we said no, then he asked where we were from. We said “NZ”, he says “OH, do you know this person?” We reply, “ah, yes we do actually”. What a small world, even when you are in an area with the same population as all of NZ. After talking for a few minutes, the cops proceeded to turn up, they run to their cars, and proceed to do burnouts up the highway onramp. Insane.

Let’s take a second to talk about the police in Japan. It’s weird, back home police usually do everything they can to give you tickets. In Japan, they just drive their car around the parking lot asking everyone to be quiet and stand on the footpaths. They also do this in the most polite Japanese ever. Come to think of it, I have never been looked at by police while driving my car on the roads in Japan. If I had the same car in NZ, I would be pulled over multiple times to ‘check my licence’ or something similar.

The last PA we went to that night was probably the most infamous and can maybe be labelled similarly to Daikoku Futo PA in Tokyo. We arrived at Izumiotsu at around 1 to 2 am, a little bit too late to see the majority of cars. Being Japan though, there were still about 20 or so modified cars sitting around ready to be photographed.

We actually saw some friends here that we met last time we were in Japan. So we went inside with them, because it was extremely cold that day, and all grabbed a hot drink from the vending machines. Which might I add, our friends kindly paid for.

The Izumiotsu parking area also has two sides to it on each side of the highway, so if you want to see the other side, you have to get off and on again. Which, obviously we did, as we wanted to see all the crazy cars that had made themselves present that night. The clock was hitting about 3 am, which meant it was time to go and see some of our friends hitting footpath clipping points around USJ again. This night was very busy with about 4 to 5 cars in tandem runs. Osaka – you have to love it!