Finally, just like that. The last Silvia on the long list of Spotlight Features from 2016 has approached us. It’s a sad moment here at Ambition Works, but, it means that we can start pumping out our fresh content from Japan, so don’t shed your tears just yet. Our last Silvia is owned by Masatsugu-san, and it was probably the least visually modified Silvia present at the meeting. However, as far as S15s go, I’d still be happy driving around in this every day I possibly could.

It’s a driveable car, something that I think should be on the top of most people’s lists. Not driveable as in I have to spend 5 minutes getting the right angle to get over this bump driveable, but driveable as in, I don’t even need to worry about bumps driveable. The height it sensible, without any amount of unnecessary camber or tyre tucking.

Masatsugu-san is rocking the classic white Volk racing wheels on the rear of his Spec R turbo S15. The factory aero side skirts have been replaced with some quality 326 power equipment. Also painted to match the factory Spec R blue paint job. 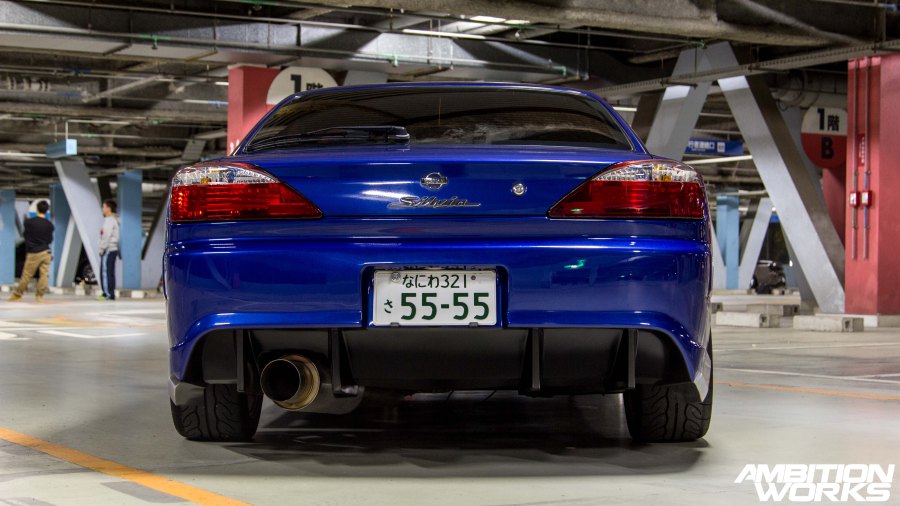 The rear is looking tough with the addition of an Origin Labo purchase. I’m a real fan of the raised look these half black rear bumpers give off. Makes it look like it’s ready to burn some rubber on quiet abandoned streets of Kobe at 3 in the morning.

Tri Spokes! Up front, Masatsugu-san has chucked some classic tri-spoke Advan wheels onto the hubs. Personally, I’m not a huge fan of tri-spokes because they make panning shots look a little below par, but a whole lot of people are, including Masatsugu-san, which is all that matters.

As well as owning this S15, Masatsugu-san has created the ‘Nissan Silvia S15 Meeting Project’ group of close-knit individuals. A few of the members were present during this meet, so at the end, we all got together, held up their massive banner, and took a cheesy photo, because why not? You can catch these guys on Facebook right here if you’re interested.

Alright, that concludes it. We are closing that chapter, and starting the next. So make sure you’re here for the next article that will be filled with new content from Japan! We will also be working on a new line of stickers to come out this year, as we have run out of stock of our old ones. So if you have either a white one or sparkly gold one, they won’t be reprinted again. Treasure it!