The R32 GT-R is a hot topic right now, with America being able to finally import the oldest models of the R32. What do you think was going to happen when you introduce a foreign species into a new island? Demand went up like you wouldn’t believe as millions of new people could finally put their hands on their own R32 GT-R. So what used to sell for a steady $15,000USD or so, is now going for over $50,000USD. The same product and features, just a much higher demand. 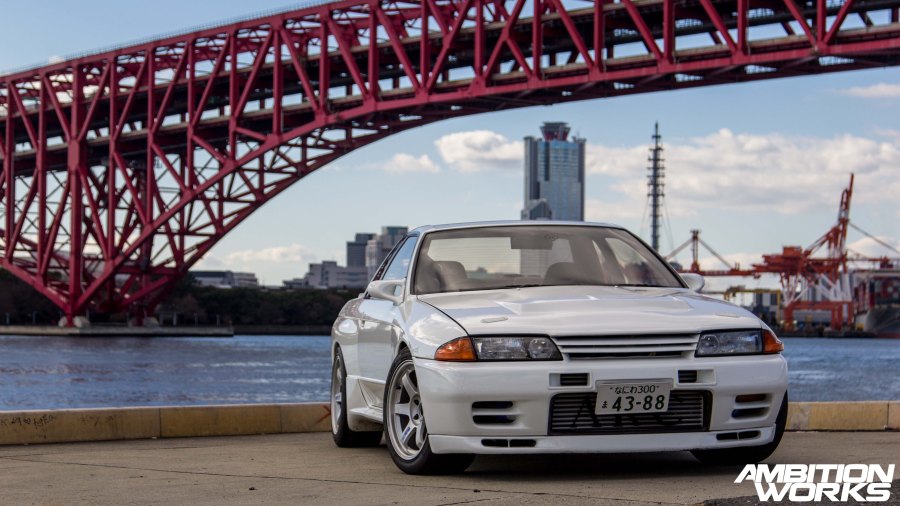 This particular example was actually owned by a ‘grandfather’ in the Osaka area. Our photographer friend who lives in Osaka said he was going to just ‘borrow’ it for the day off his neighbour (who is the grandfather just mentioned, though not actually related to our friend) and drive it to our shooting location. We weren’t even planning to shoot photos of this, but because our main subject was running late, we took the opportunity to enjoy the morning with this Godzilla in front of our lens. 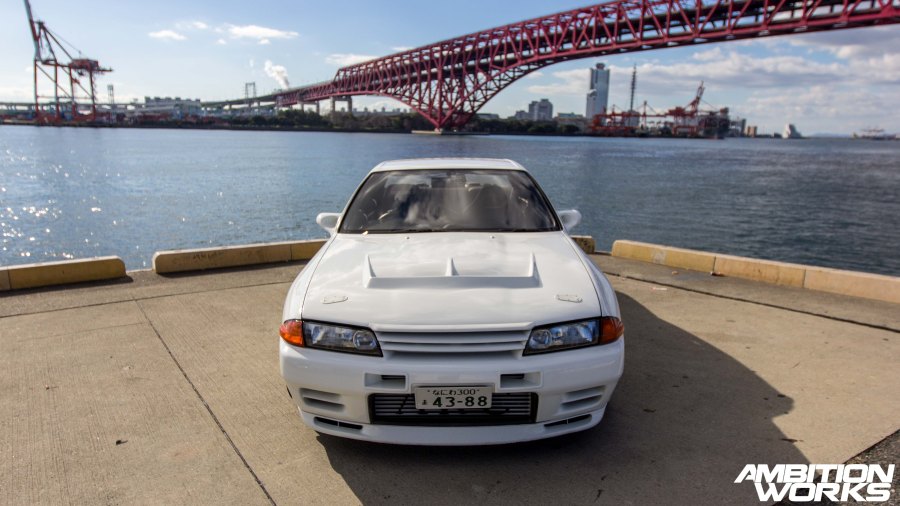 To be honest, I don’t think there was a bolt left unturned on this build. Everything looked to be aftermarket, with big brand names as far as the eye could see. We can see straight away that this R32 is running an aftermarket ARC FMIC set-up. Along with that cooling modification, the aftermarket bonnet lets in cool air from two ducts. This car must be packing a punch to require cooling modifications as serious as that. 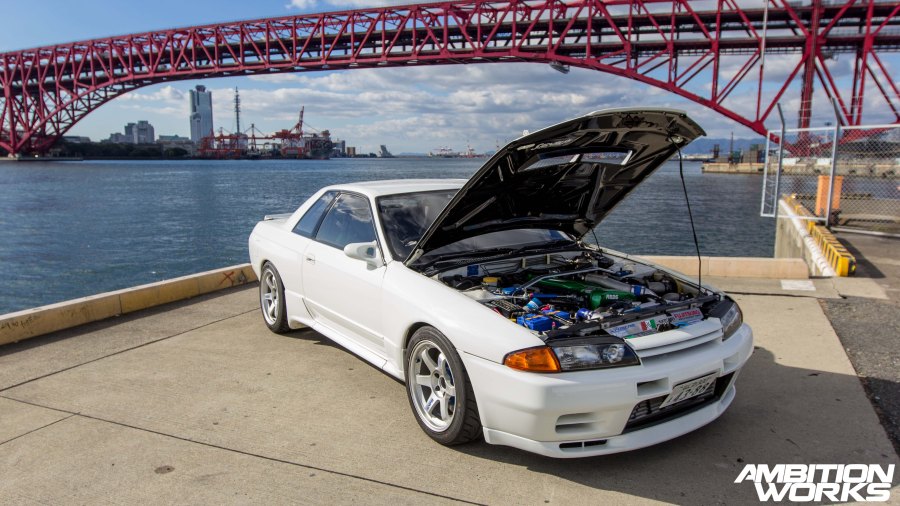 Opening the bonnet, and what do we find? An RB26DETT, that’s what. For anyone who doesn’t know what that means, it’s a straight 6, 2600cc twin turbo engine with dual overhead cams and electronic fuel injection. From factory on the R32, they would be pushing around 280 hp (205 kW). You may be thinking, only 280hp? That’s not much? Well, scroll back almost 30 years, and you’d find out that 280 hp was, in fact, a massive amount of power. 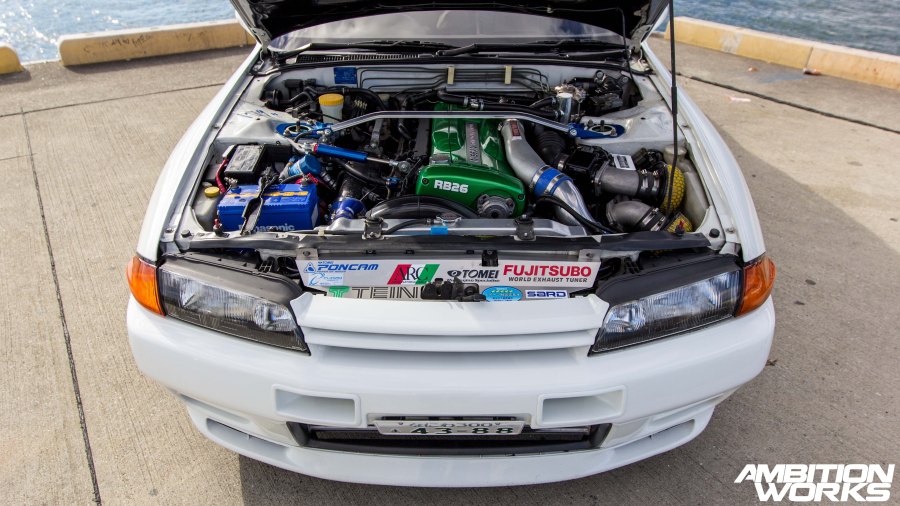 Looking closer at this R32, we can see that it is not just a factory fitted RB engine with 280 hp. This heart has got some flash parts added to it. Due to the fact that the actual owner wasn’t present, information on what’s actually been done and new power figures are limited. However, from these photos, we can get a rough idea on what bolt on parts are new and improved. Just looking at the stickers we can see some big brands like Tomei, Fujitsubo, Tein, Sard, and ARC. 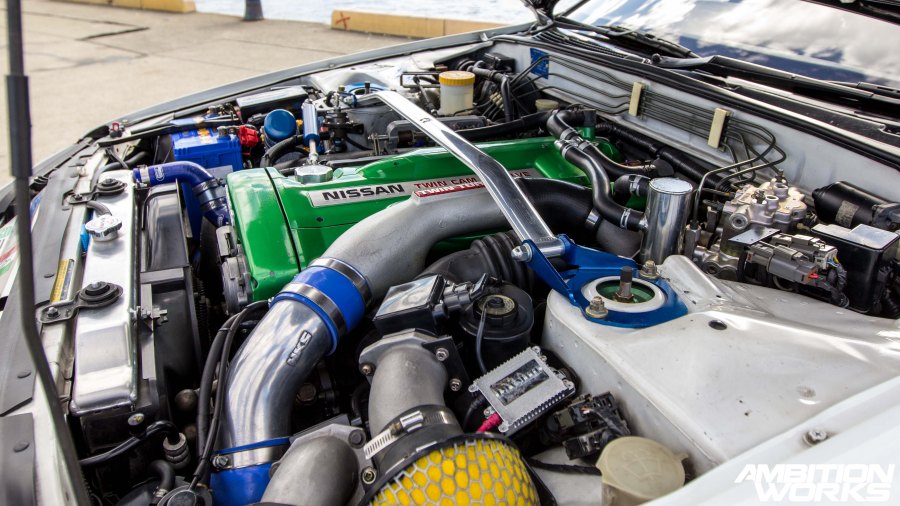 If we look to the left here, we can see an HKS bulge on the piping. That can only mean one thing, right? This GT-R has had its turbos upgraded to that of a twin set-up from HKS. After going for a quick spin in this around the toll roads of Osaka, I can confirm that it is seriously packing a walloping punch of power. Probably so much, that to do so would mean upgraded turbos. 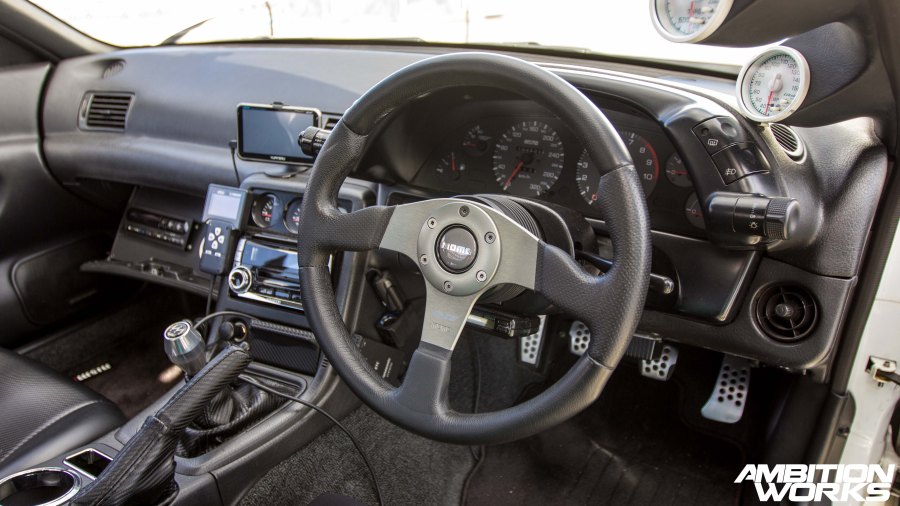 The interior probably confirms our theory. It looks like the inside of a small aircraft. Gauges everywhere. So many that you’d be looking anywhere but at what’s in front of you while driving this. Looking to the left of the Momo steering wheel you’ll find the controller for the Apexi FC unit, as well as a turbo timer sitting under the steering wheel. We also have 3 gauges relaxing above the stereo, along with two more on the side pillar. Crazy stuff inside this car. 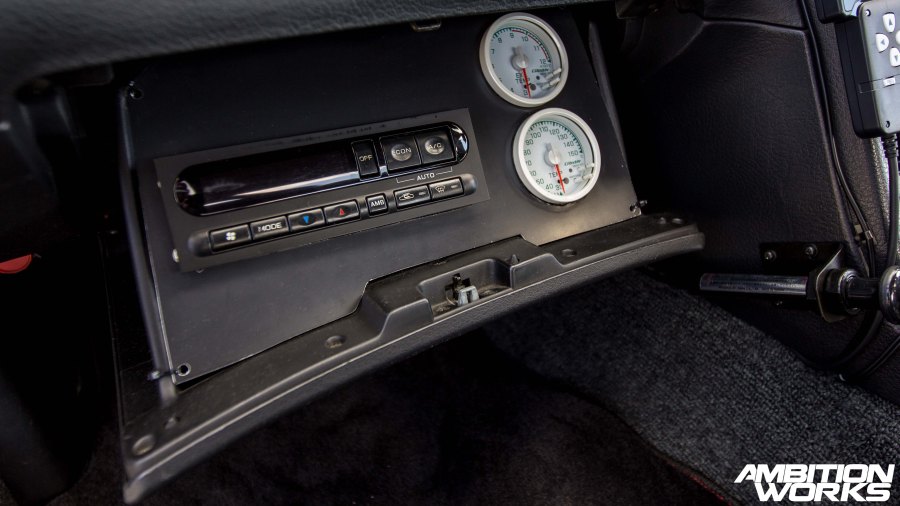 But wait, there’s more. Hiding in the glove compartment is the AC control unit and two more gauges! With all these gauges, the driver will sure be able to gauge the status of the engine very precisely. Not much money has been spared on this beast of a Skyline. It would probably be equal to a small house in some places of the world, if not more. 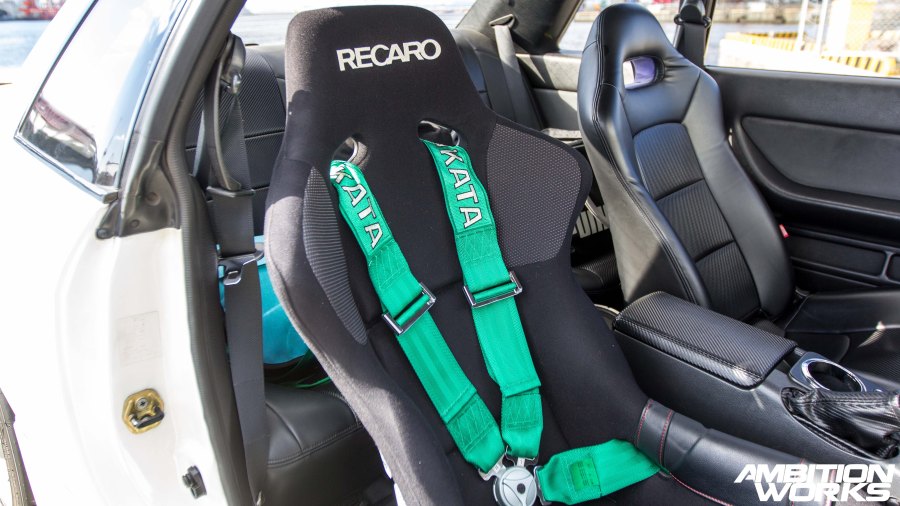 Take a step back, and safety goes right to the driver’s seat. With a nice looking Recaro seat with the usual combination of Takana racing belts. It’s funny actually. You wouldn’t notice without being told, unless you’re like me, but on the planes, trains, and buses in Japan, you’ll quite often be sitting in a seat designed by Recaro themselves. Complete luxury I tell you. 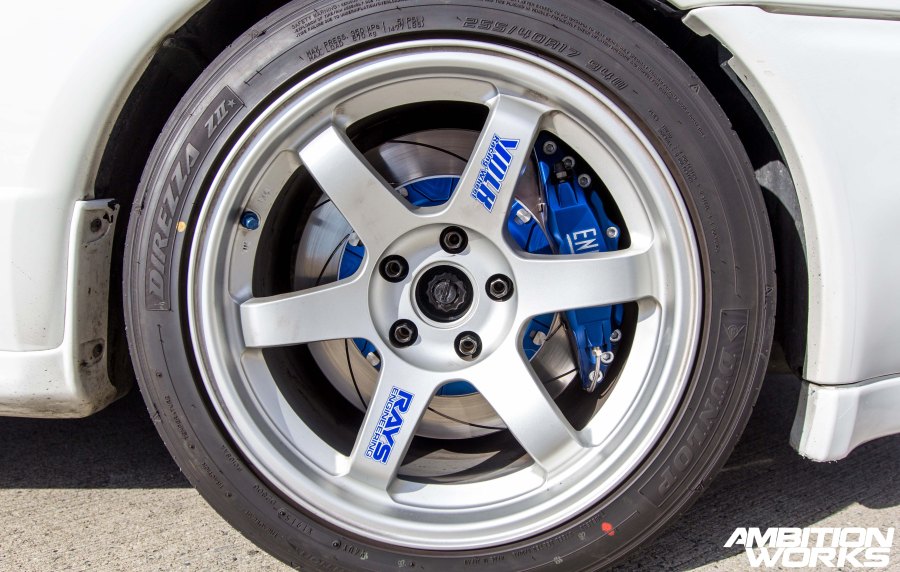 Putting all the excess power to the ground is a set of Rays Engineering, Volk racing wheels, in pristine condition I might add. Along with the 17” Volks, the rotors have been swapped for aftermarket slotted ones, plus the addition of upgraded Endless brakes. The amount of genuine stuff on this car could not be cheap, that’s for darn sure. 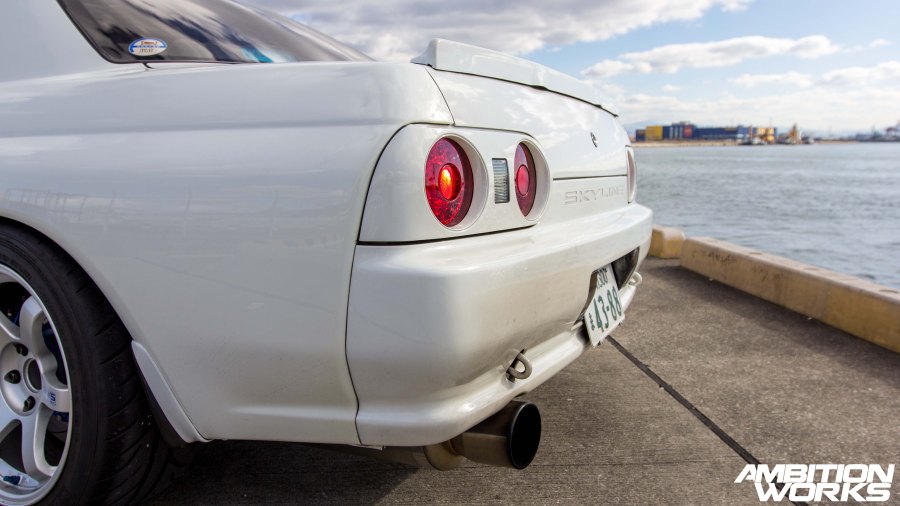 The rear end has some aftermarket tail lights that seem to have a slight crystal look to them. A nice subtle boot lip spoiler sits on top of the boot. To finish it all off we have a modest exhaust tip sitting flush to the rear bumper. What a car. Really. What. A. Car.

As I said at the start, this car wasn’t actually our subject for the day. Just out of luck, my friend was able to drive it to the meet. He then proceeded to drive me back to my accommodation afterwards, nothing like hopping in another GT-R to make your trip even better. Let’s not get too depressed though, thinking you’ll never have enough money to build a car like this. It’s not the car parts that count, it’s how you use the car. You better remember that.

Grab some Ambition Work merchandise from our shop! Click here.

One thought on “Japan’s Greatest: A White Godzilla”