What is stance? Where did this word come from? Why do so many people love to hate it? Apparently, there is a whole nation of them in Japan. Today we take a trip to one of the most popular cities in the world, Tokyo, for a car show that would soon blow my mind. This event, called Stance Nation Japan Tokyo 2016, was held in the popular area, Odaiba.

With around 2000 applicants it was set to be one of the biggest automotive shows of the year here in Japan. Out of those 2000 cars, only 940 were selected to enter as show cars. That’s a massive amount of cars that had to be cut out, and still a huge number of cars to be presented! With a show of this size, in a city as big as Tokyo, you’d only expect thousands of spectators to drive their cars to the event. 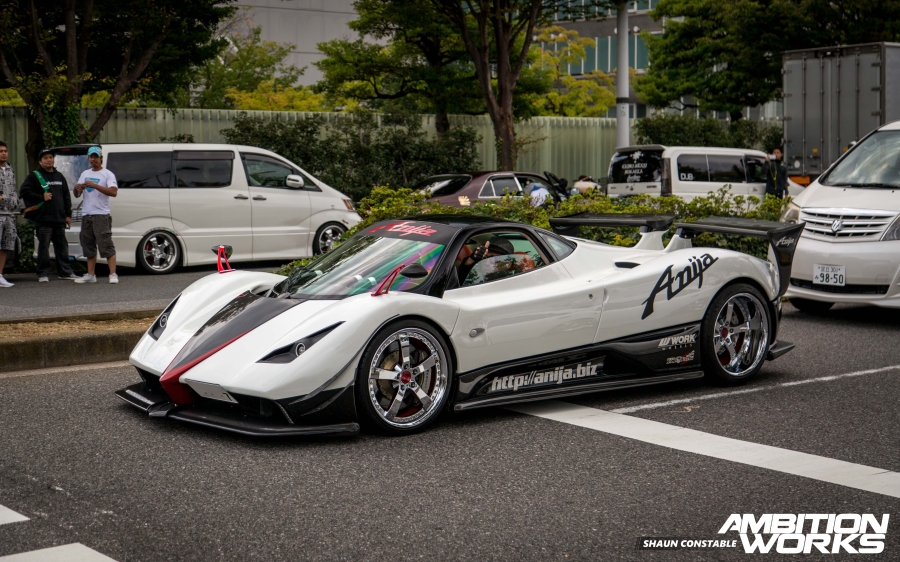 We drove overnight to get to Tokyo, with a total travel time of about 14 or so hours. It was a mission to just get to the show in a simple Kei car, so I can’t imagine the drive in something more uncomfortable. Each car in Japan has kanji characters on their number plates stating what prefecture that car is from. Some cars had come from places in Japan even further away than where we had come from!

When we arrived we were shocked at how many cars were waiting to park in the carpark next to the show. The line went nearly all the way around the outside of the carpark, hardly moving at all. It was almost like everyone from Japan had gathered in one place to witness everything Stance. 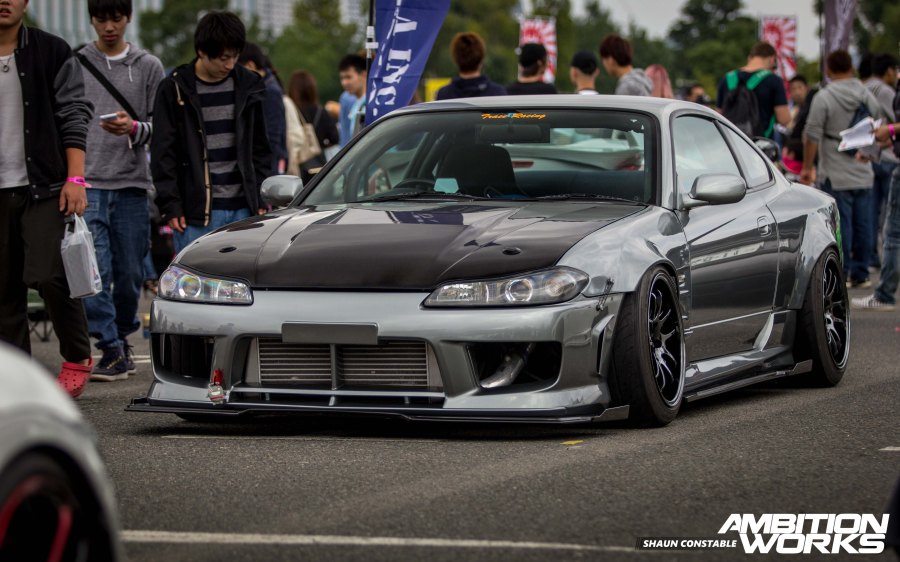 Stepping inside the show gates was another thing altogether. We had already purchased our tickets a few weeks before from the convenience store, meaning no line for us! I thought the cars on the road were amazing, but these cars were just on another level altogether. It’s like being given the best ice-cream in the world, then someone else comes along and gives you an even better one.

In NZ, I’m rather familiar with most of the cars in the North Island and can usually point out whose car is owned by which Kiwi. Here, though, my network as of today is still very small. Step by step, person by person, I’m trying to build a network of friends, and as my Japanese level increases, I feel so will my network. I say this because of this particular RX-7, I saw at Daikoku Futo PA the night before, along with some of the other show cars on display. While taking some photos, the owner came up and started a light conversation, which ended up with us exchanging business cards. That’s one more connection right there. 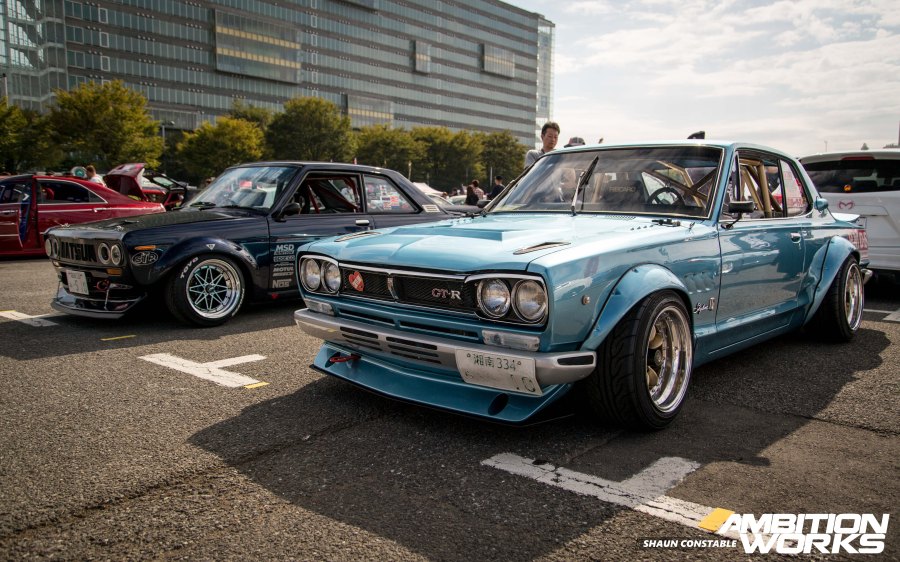 Along with brand new cars there were some nostalgic cars also present. These two race-prepped Datsuns were like candy to the eyes. In a perfect world I would have had a few hours with each car at the show just to look at all the finer details the owners have put so much effort into. 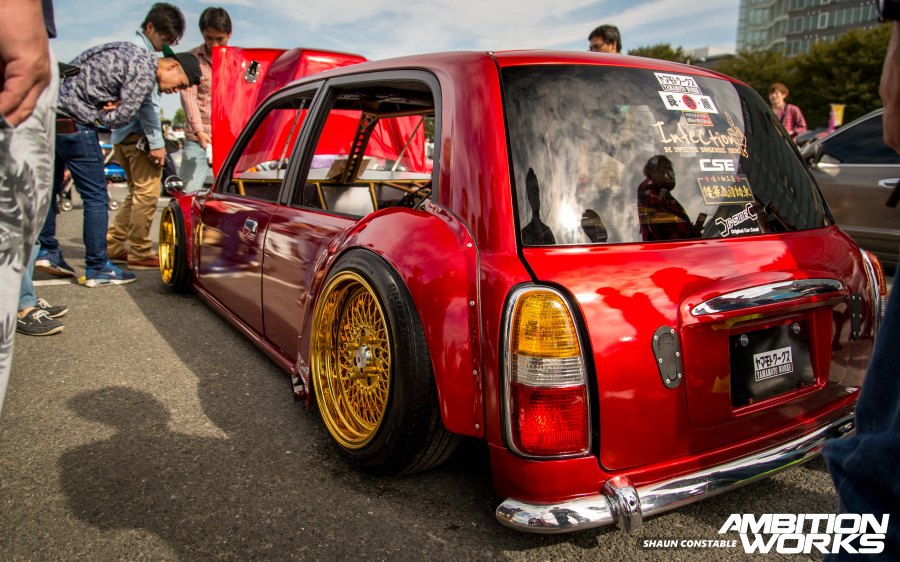 Right here, this machine, this product of someone’s dream, was one of the craziest modified cars of the event. The engine had been replaced for that of an MX-5’s and extensive bodywork had been done. What’s left of the original car is probably only the tail lights. It’s builds like these that make me think I’m heavily lacking in automotive skills. I change some wheels over and think, wow, what a good modification I’ve just completed.

This is also a really popular trend in Japan, and this was one of the most extreme cases. The Honda Odyssey, a car made by Honda to move people’s families around and nothing more. Yet, the Japanese people have started to purchase this Honda and slam the motherfucking daylights out of them so they literally drag their asses on the ground. This right here, is what most Odysseys that are modified will look like in Japan, maybe not as extreme as this, but low and wide nonetheless. 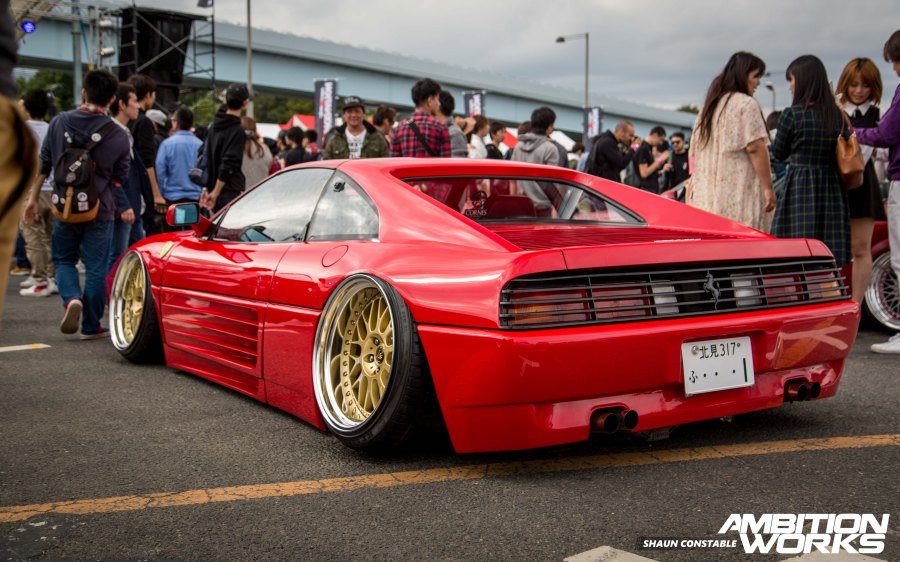 Another connection right here, an addition to my Japanese network. As soon as we turned up to Daikoku Futo PA the previous night, this Ferrari was waiting for us. So in extreme excitement, I just had to take some photos of it, and again, handed out my business card to the owner. I had seen this online before coming to Japan and thought to myself what a crazy car. Then for it to be present at two locations during both days I was in Tokyo was rather rewarding. It’s not a classic Ferrari anymore, it’s an owner’s Ferrari. 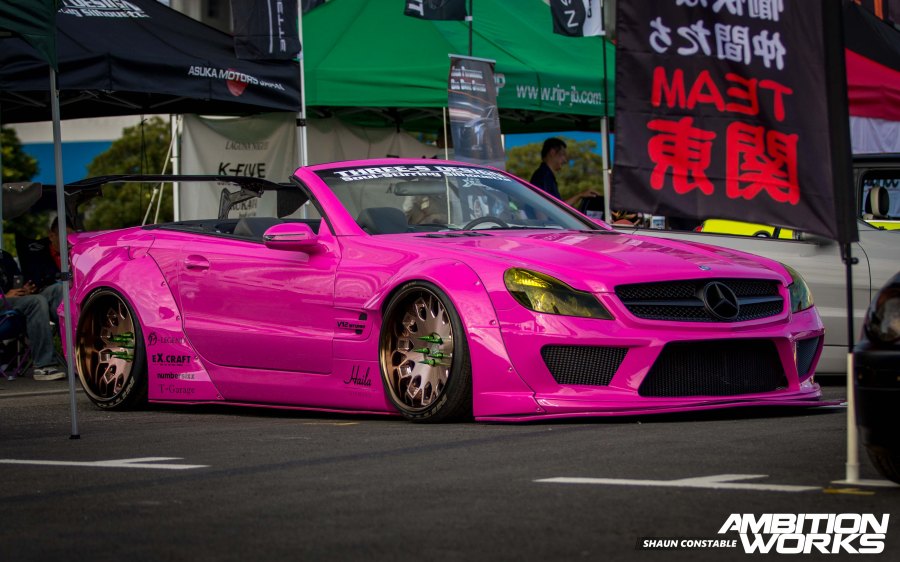 Each car at the show had been modified in a slightly different way. The set-up for the show had all the trade stands around the outside of the car park, with the show cars taking up the middle. This car made me jump back to GTA 5. The game had a car that must have been modelled off this, it looked exactly the same. Even the modifications in GTA5 were very similar. 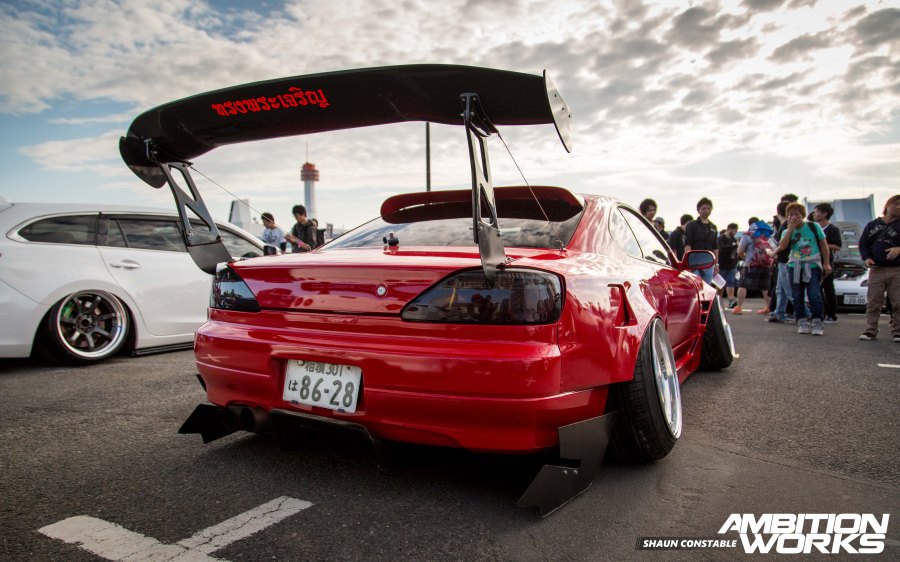 Even though this show was mainly for stanced cars, they all had their own spin on what stance is and how they could stand out from the crowd, which is extremely hard when that’s the goal of everyone at the show. This S15 had my vote for one of the nicest cars at the show, and by nicest, I mean one of the cars I’d be happy to own and drive on a regular basis. 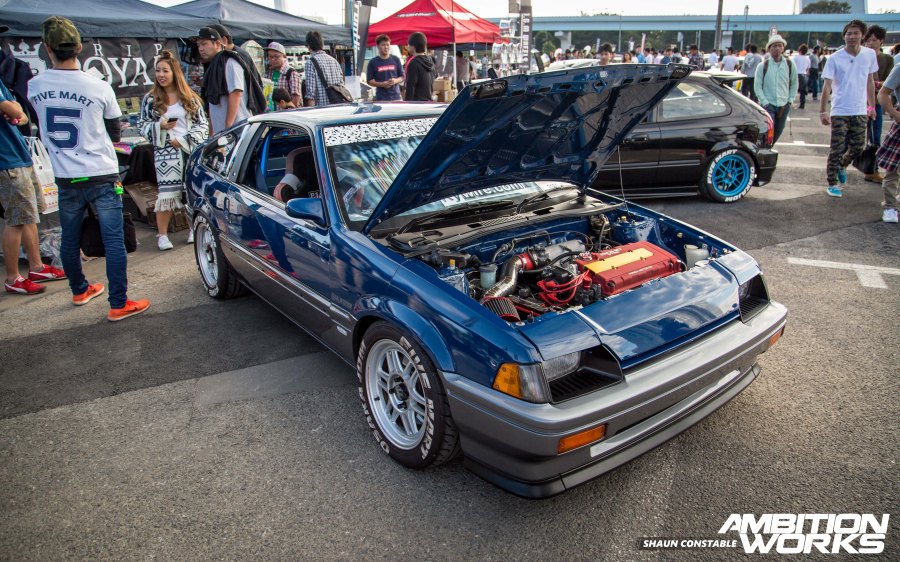 Along with all the extremely modified cars, there were a few gems like this Honda. Period correct styling creates a very clean and subtle look to the car. If you look close enough, my guess is that the car has been fully stripped back to metal, and they have started from scratch.

Another one for all the purists out there. Mad Max purists that is. There were a few cars lined up with the Freakin Works window banner on them. This one was probably the most, what the fuck, of them all. The entire wheel looked like it was mounted fully outside the stock body. I sure wouldn’t want to be chased down by something as aggressive looking as this 350Z. 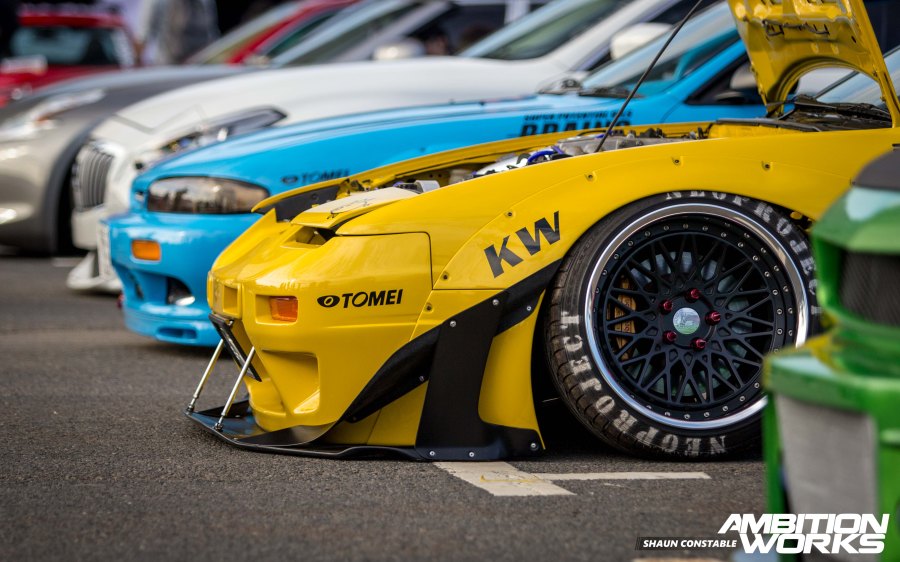 Among all of the show cars there were also a few drift cars scattered here and there. It was a good change of pace. The 180SX and S14 still had nearly every aspect of the car modified, and they could easily be mistaken for a show car by how nice they looked sitting side by side. It was starting to get later in the afternoon by this time, and there was still so much more to see. I don’t think I’d ever been to an automotive event where I had to rush from car to car and still not see everything in the given time limit.

How about some good old American muscle for your taste buds? With a touch of Japanese of course. From what I can tell it looks like a Ford Mustang, Charger, and a Ram. Please correct me if I’m wrong, as my knowledge of American things is little to none. The cars look menacing with the wide wheels and bolt on guards. 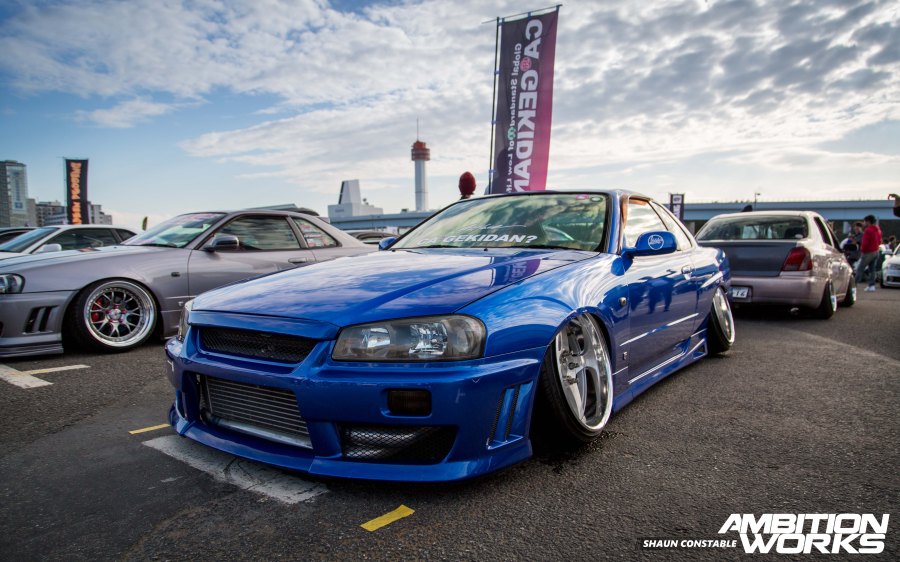 An RB26DETT Skyline is something that should push out bucket loads of performance right? It’s a car that when you hear the name, you think, fast, aggressive, and mental. Does this one still fit that trio of adjectives? It’s still got the same heart, but the wheels leave only cms of traction to the road, is that enough to still produce performance? Or is it all for show?

As we had a massive drive back to our hometowns in Japan, we had to finish up a little bit early as the drive would take around 12 hours and we had work the following day. The show was amazing, fantastic, extraordinary, fabulous, mind-blowing, insane and every other adjective that has a similar meaning in the English language. But sadly it was time to leave.

We couldn’t leave just yet, without doing another walk through the adjacent carpark. With all the talent there, I didn’t want to miss any more cars. This one was sitting outside the venue entrance, the owner was looking confused, I’m not sure what she was up to with the car sitting on only three wheels. What an easy way to work on a car, no jack required.

Trying to copy the American car in the corner of the carpark, but not to the same extent. A rather peculiar Honda was sitting by itself. It was a trip through memory lane when Need for Speed Underground was the go, and playing with hot wheels was the only way I could get my hands on some automobile machinery. 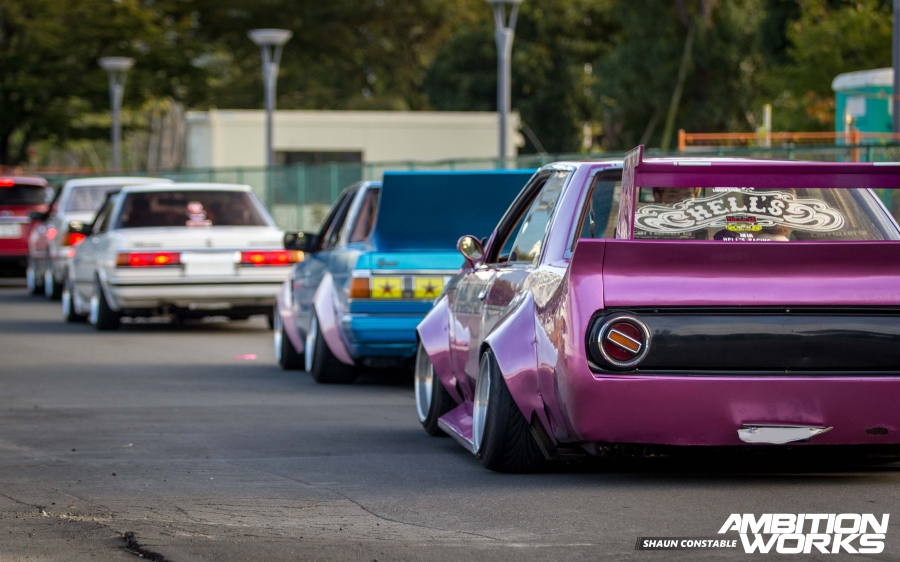 Watching cars leave car parks in Japan seem to be a rather popular activity. We just didn’t have enough time as we also needed to buy presents for our co-workers back in our cities. We waved goodbye to only a few cars. This pink one I saw the night before in Daikoku Futo. I also saw this same car last year at Daikoku Futo; he must love showing off his car.

Was it what you expected? Stance Nation? It sure wasn’t what I expected. Cars of all different makes and models, all modified with a different interest at heart. Sure there were some similarities, but that’s always going to happen. They all have four wheels and an engine. So, when you’re planning your next trip to Japan, make sure that you come when there are some big events at Odaiba. It’s easy to access via the public train system, and it hosts some big automotive events, as well as other genres of events. The first event in Japan was now over for us, what event will we attend next? Well, that’s anybody’s guess.

3 thoughts on “Stance Nation Japan: The First of Many”