Daikoku Futo Parking Area (大黒ふ頭駐車場 / daikokufutō chūshajō) or Daikoku Futo PA for short, is probably one of the most popular parking areas during Friday and Saturday night in the Tokyo and Yokohama areas. Three roads lead in and out of the man-made island. Once you’ve picked your entrance, you’re greeted with multiple downwards spiral slopes that all join up together and head towards the entrance of Daikoku Futo PA. 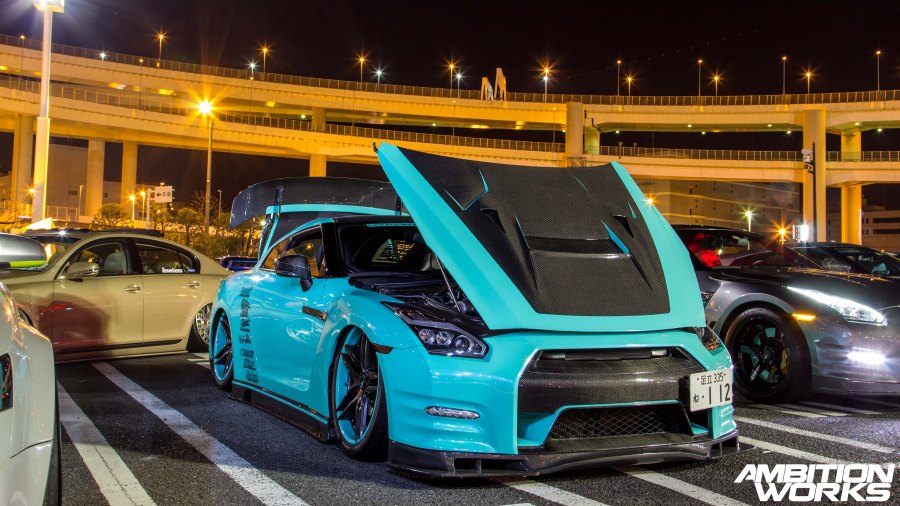 On any given Friday or Saturday night you can find yourself greeted by hundreds of different automobiles. It may even be one of the best places in the world to routinely see, weekend after weekend, crazy cars that have come not only from Japan but from all corners of the world.

It was a new year, (the start of 2016) and our second time visiting Daikoku Futo PA. It was literally just as good as the first time, if not better. You know how they always say, “The first times always the best”, apart from the obvious exception to that, I think Daikoku Futo PA also breaks that saying to pieces.

We only stayed for a short time, which made me act like a crazy man, trying to capture every car that took my interest. The insanely wide, cambered, and low trio of modifications have really hit Japan hard. Nearly every car had an aspect of that trio, if not all three of them. 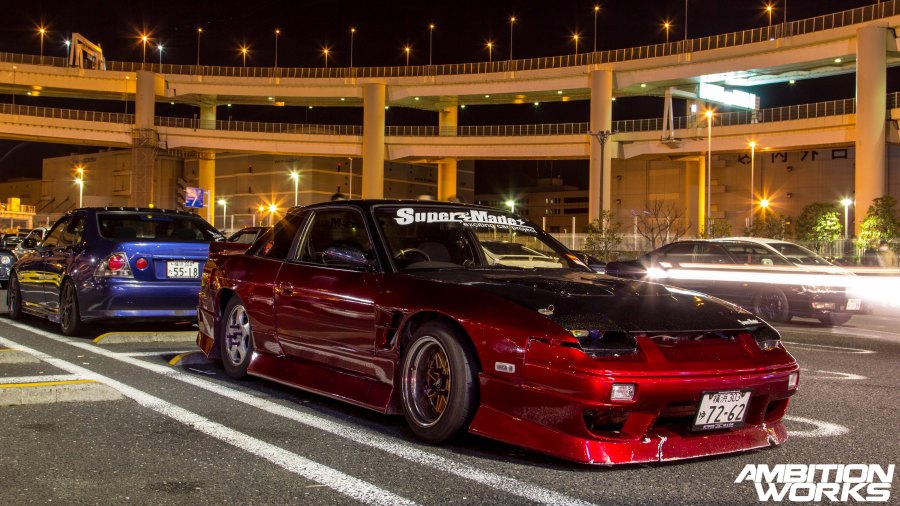 It’s not always a super tidy show cars that come along either. This beat up drift-spec Onevia had made an appearance. With its full aero, but horribly weak rear wheel fitment. It’s also very popular to have English stickers on your car, even if they don’t make any real sense. In this case, it does, but some of the stickers I’ve seen are probably taken from shirts with English on them. If you’ve been to Japan, you’ll know how bad the English are on some of their shirts.

Only one Lamborghini made an appearance this time around. Casually parked in between two rather nice examples of S15s. That lady to the right also just wouldn’t move, but in typical fashion, after the long exposure, she goes on her merry way.

The name Daikoku Futo (大黒ふ頭) has three kanji characters, the ふ (fu) is in Hiragana for some reason. After a little bit or research, the ふ (fu) could be replaced with 埠 (fu) which means wharf and the 頭 (tou) means head. The 大 (dai) 黒 (koku) translates directly to big and black. So if we put it all together we get 大黒埠頭 or big black wharf head. The third kanji, however, is just a guess, so please don’t take this as 100% accurate.

We were also treated to a few Japanese classics: the Skyline and the Celica. Both of which are rather hard to come by these days, and if you do come by them, the price is through the roof. These two were in pristine condition and would have definitely sought a high price at auction. Maybe they’ve been stuck with the first owner during their whole life.

I think this Jaguar was my favourite car present that night. Sitting so low on airbags, and the already long body make for an awesome looking cruiser. I found the owner later on and asked to see the airbags in motion, which he kindly agreed to show me.

There’s also a big presence of VIP sedans running throughout Japan. With them, it’s all about being the lowest and having the least amount of space between their chassis and the concrete. This example is pretty tame, but sometimes the amount of camber these style of cars have makes you wonder how they ever get from A to B without fully destroying their chassis.

I’m not sure why they do it either, is it just to be cool? Surely they would like some function out of their cars. If it’s on bags, that’s fine, they can adjust the ride height when travelling from A to B. However, static, what are they thinking? Sure, I’ll admit, it looks rather badass, but the practicality of having a car sitting on the ground is little to none in most cases. We must remember, though, it’s their car, and they can modify it however they like.

While we were there, a big group of Altezzas showed up, maybe 5 or 6, all of which were heavily modified. Behind the cars, if you look closely, you can see quite a lot of illuminated items. On the right is a restaurant which I’d assume is open 24/7, more vending machines, and some bathrooms. Although it is only considered a car park, you could probably spend a few days here and not get bored in that time period.

On this particular night, a whole bunch of little kei cars had made their way along to join in on the festivities. I started to talk to a group of them asking if I could take some photos, then one of them started playing the Fast and Furious: Tokyo Drift theme song. It was just too funny not to laugh.

You can find a whole array of styles at Daikoku Futo, from horrible drift spec Silvias, to exotic cars with flashing strobes. These two 180SXs here made me look twice. Not only were they oh so clean, but the purple one had swapped out the bumper for the American styled one. I don’t think it’s a positive thing in my books, but it’s different. 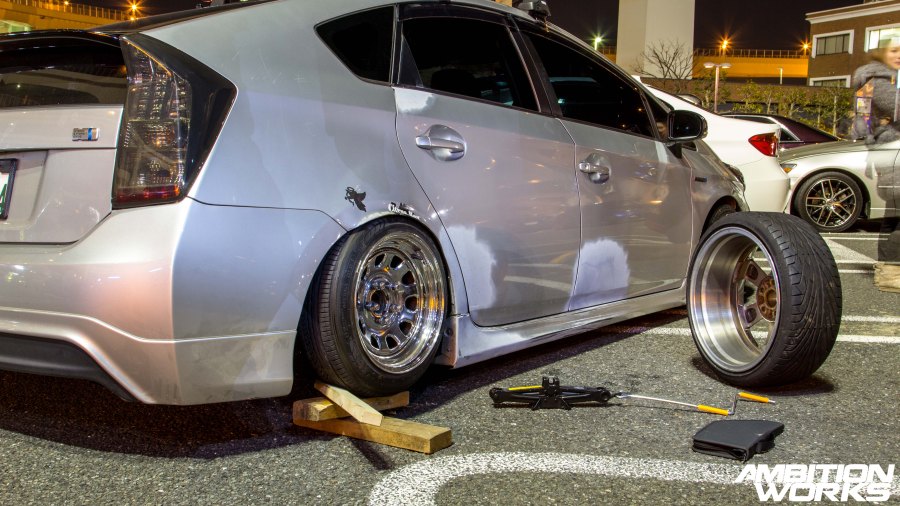 I’m not too sure what was happening with this guy. I managed to find the owner and ask. Translated, he said something along the lines of I cannot fit the jack under the car. Not sure if he had a flat tyre, or was just swapping the wheels out. The Japanese folk seem to rather like these weird hybrid cars, and love to modify them too.

I was hoping to see some cars like this, with excessive body work and crazy styling. Looks like my wish came true tonight. I’m not very knowledgeable about the details of this car, but it sure brought to life all the videos I had seen beforehand of cars like this.

The rear wasn’t too crazy; a nice double spoiler with some small shotgun pipes that didn’t protrude 10 metres into the air. I also liked the pink neons coming from the interior, it matched up with the pink from the over fenders, not a bad colour combo.

Walking to the other side of the car park, I found this absolutely slammed 350Z on some massively dished wheels. If you look closely, you can see that the paint on the rear guards have been rubbed right off by the wheel’s rim, as the tyres are stretched way too much. 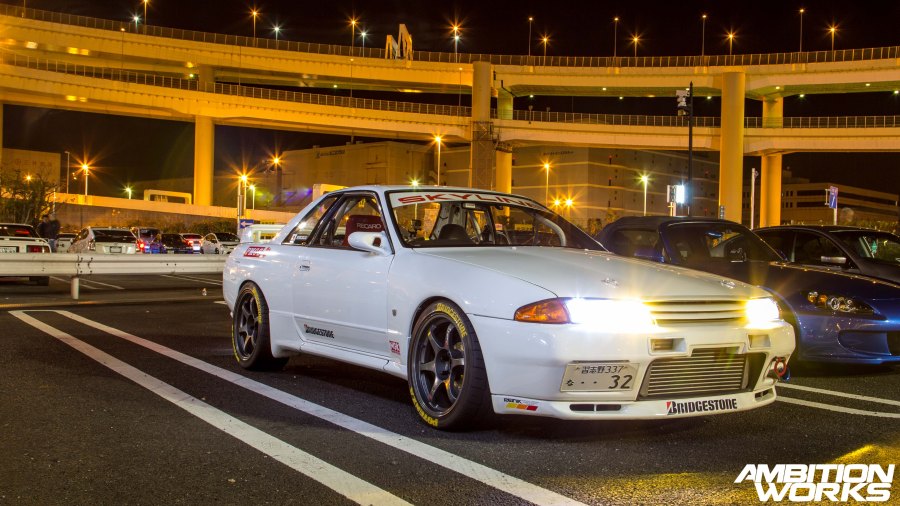 This probably had to be the most functional car there that night. It just screamed fast. It’s a fully prepped race car by the looks of it. The inside was entirely stripped down to make it as light as possible. It was actually being photographed by some other company, so I sneakily took this shot in between theirs.

The Lambo doors are a tricky one. Once upon a time I used to think that they looked amazing. I wanted to get them installed on my car. But now, to me, they look rather unnecessary. It was a modification from the 2000s that is still floating around like a lot of other things.

Talking about unnecessary, how about this exhaust? What’s the actual point? There is none. It’s to make the owner feel happy and proud of his car. What do exhausts this long do to engine performance though? It may only be for looks, but does it reduce power? This modification had me 100% confused.

It’s a great place, really. There are some weird things there that’s for sure, but also some absolute gems. You could easily stay there overnight and into the next day if time permitted. Daikoku Futo would without a doubt be my number one recommendation to anyone travelling to Japan. Go on a Friday or Saturday night and you are 99% guaranteed to see something interesting. Enjoy a cold beverage from the vending machines, or some tobacco. Have some dinner at the 24/7 restaurant, or just bask in the glorious parking area that is Daikoku Futo PA.

One thought on “Daikoku Futo: The Return of the Gaijin”