This is the stuff of dreams. Having four insanely powerful cars waiting for you at a train station in Tokyo city, Japan. You couldn’t ask for much more. With just over 10 litres of engine capacity, 5 turbos, and a collective amount of horsepower hitting the 2000 mark between them, it was surely going to be a great day from here on out. What a way to finish off two months in Japan, with a cruise around Yokosuka with some top notch people. 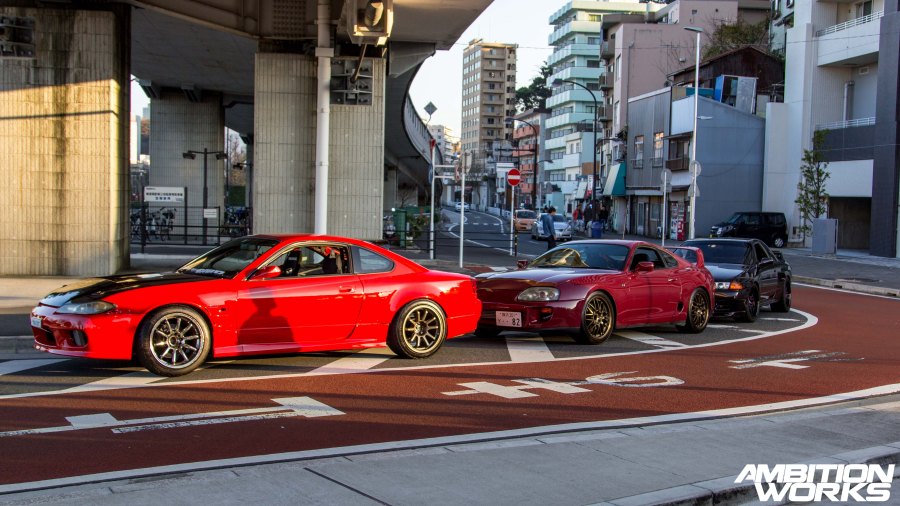 This adventure started when I received a message from Jeff asking if I wanted to meet him and some of his mates in the greater Tokyo area. I was ecstatic, someone wanted to show me their pride and joy! Sadly I couldn’t actually meet up until my last few days in Japan. It was a long few weeks, that’s for sure, before I was back in Tokyo with a day to spare.

When I could finally meet up with them, Jeff and his friends waited for me in a town outside of Tokyo’s city centre, called Yokosuka. It looked remarkably like California with beachside roads and palm trees lining them. As you may or may not know, Tokyo has a lot of train lines, meaning I may have got lost on the way to Yokosuka. However I showed up in the end, a little bit late, but nevertheless ready to start a new adventure.

It wouldn’t be Japan if we didn’t start off at the ‘コンビニ’ (konbini – convenience store) for a pit stop before heading off to find some nice locations around Yokosuka. Before we move on from the konbini, let’s just talk about how great they are for a moment. You can buy nearly anything you want in a kobini; food, drinks, alcohol, hygiene products, magazines, pay bills, get cash out, clean your backside with a jet in the bathroom, or enjoy the lovely staff yelling ‘いらっしゃいませ’ (irasshaimase – welcome, come in).

Anyway back on track. We drove around for a while trying to find a place to take photos, only to be denied entry to all of the places, (this has happened to me before in Japan when trying to shoot cars). We ended up on the roof of a department store, after boosting through some tunnels and pulling some wild u-turns on the main roads. 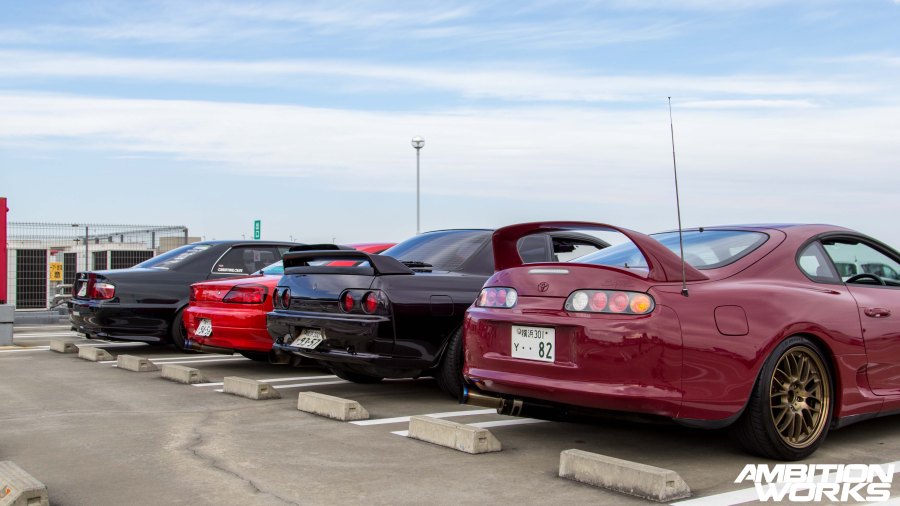 Yokosuka had definitely put on some nice weather for us to enjoy this day. Blue skies with no rain and a cool breeze. From up on this building we had a nice view of the ocean and surrounding parts of the town. As well as the nice view of nature, we were also treated to a nice view of automobile machinery. 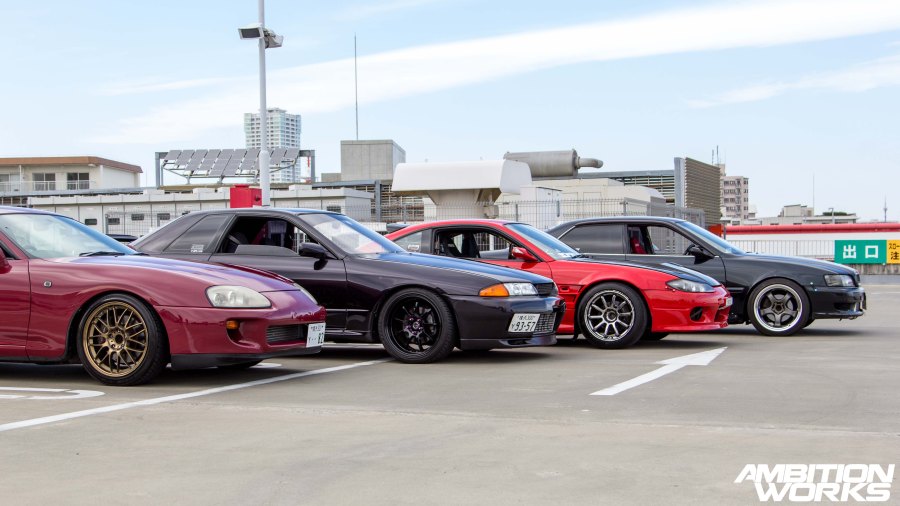 From left to right we have William’s Toyota Supra A80, Joshua’s Nissan Skyline R32, Jeff’s Nissan Silvia S15, and lastly Kevan’s Toyota Chaser X100. A good mix of Toyotas and Nissans that all look extremely angry. Everyone has put in a lot of effort modifying their cars, as you can see they all look like top notch examples.

I wanted to move the cars around a bit for better composed photos. As soon as we had Jeff’s S15 nearly in place, a security guard came running out of nowhere and told us we weren’t allowed to park anywhere that wasn’t in an actual car park. After being yelled at in angry Japanese, we thought we better take the hint and move on from this location.

All the main roads were double laned around here and two way. We headed out from the main city and made our way out to smaller parts of the area where the roads were much smaller and the tunnels were more abundant. 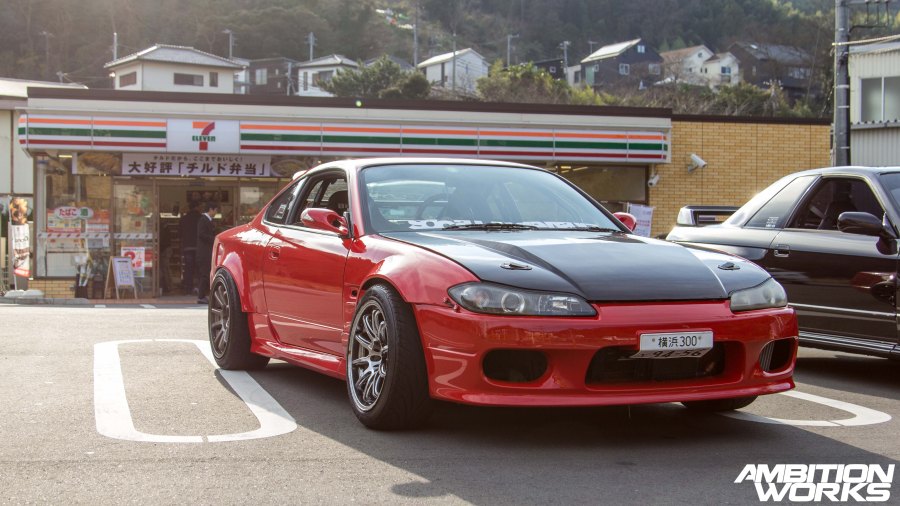 It was obviously that time of the day again, after a few hours we made another stop at a konbini. This time at the infamous 7-11, that even places outside of Japan have. At this point Kevan with his 400hp+ single turbo 1JZ had left us to buy a roll cage for his car. So only three cars were left to bask in the epic sunlight. 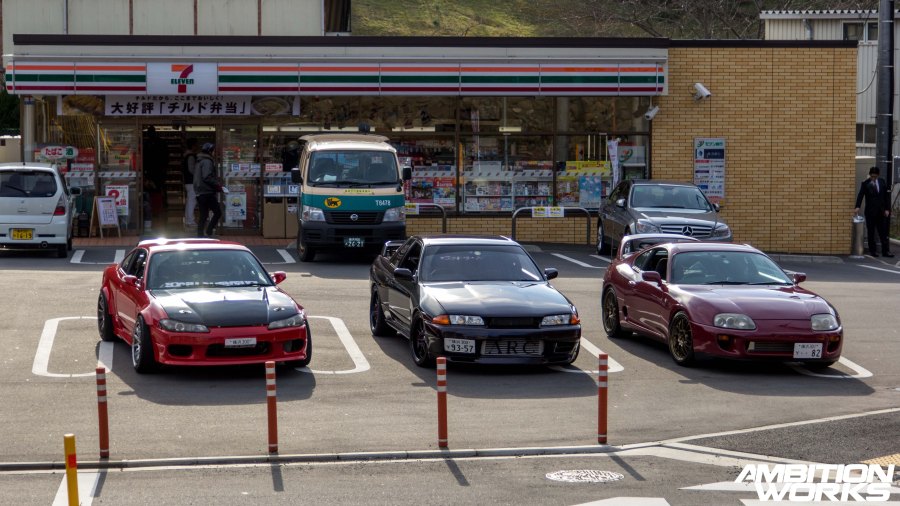 This right here is one of my favourite photos from Japan. Ever since I started getting into the automotive ‘scene’ I’d seen pictures from Japan of cars at ガソリンスタンド (gasorinsutando – gas station) and kobini’s. For me to be able to take my own photo of some absolutely epics cars in front of a popular konbini in Japan filled me with joy. I couldn’t help feeling like a kid playing Gran Turismo for the first time on Playstation One.

This area we stopped in was very rustic, and for the first time during the day, we didn’t get told to go away when parking differently from the designated parking spaces available. That made us all happy, yokatta! 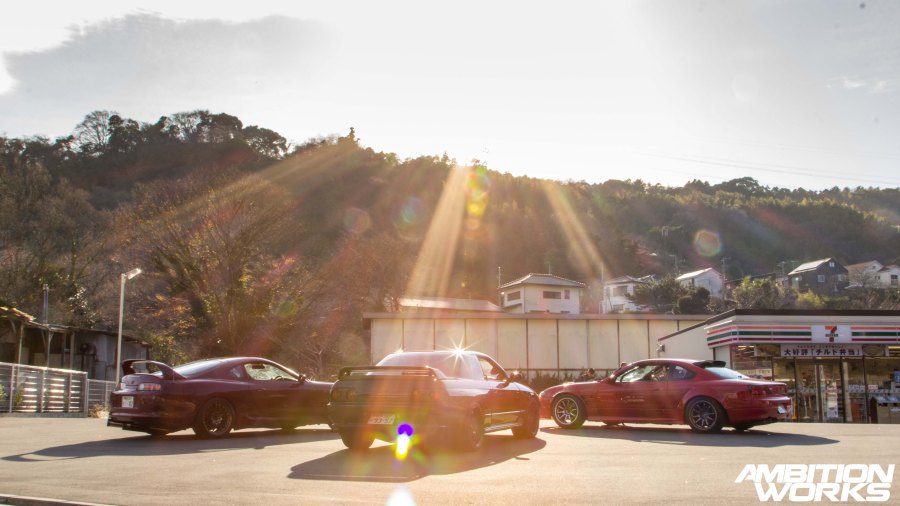 Konbinis around Japan actually have quite a large parking area, it’s never actually full, so it makes for a good location to take some photos. Although we didn’t actually ask, I’m sure if you did, they wouldn’t mind. Free advertising for them. It’s a win win situation.

William’s Supra is running the infamous and solid 2JZGTE with a single turbo conversion. It had a lot of modifications done to the engine and is pushing over 700hp+ at the wheels. Since these photos were taking, he’s sent the Supra off for more upgrades and is hoping to smash the old 700hp figure to pieces.

Just look at that turbo! It’s nearly the same width as the head of the engine. We went for some high-ish speed runs, as high as you can around a small area, and wow, it sure puts your brain to the back of your skull, and your body into the creases of the passenger seat. 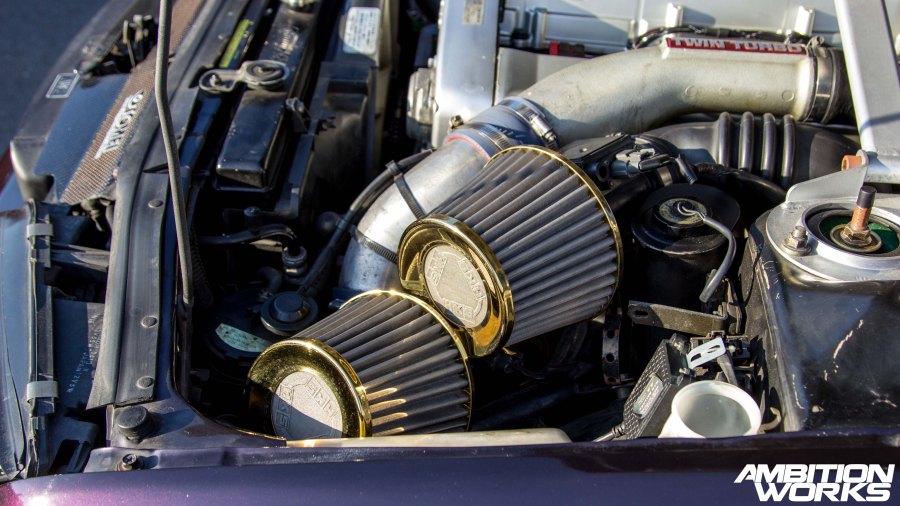 Joshua’s R32 GTR has the RB26 with the twin turbo set-up under the hood. It was around 400-500hp at the end of last year. It’s been awhile since then though, and it’s now off for a single turbo conversion to push even more power to the wheels.

The last car on the day was Jeff’s S15, probably my favourite one (because I had a Silvia myself), and the only one set-up for drifting. The SR20 has been chucked out, and replaced with another 2JZGTE with a single turbo conversion. He’s playing with the big boys with an engine like this. With this set-up, the S15 is putting down over 600hp. 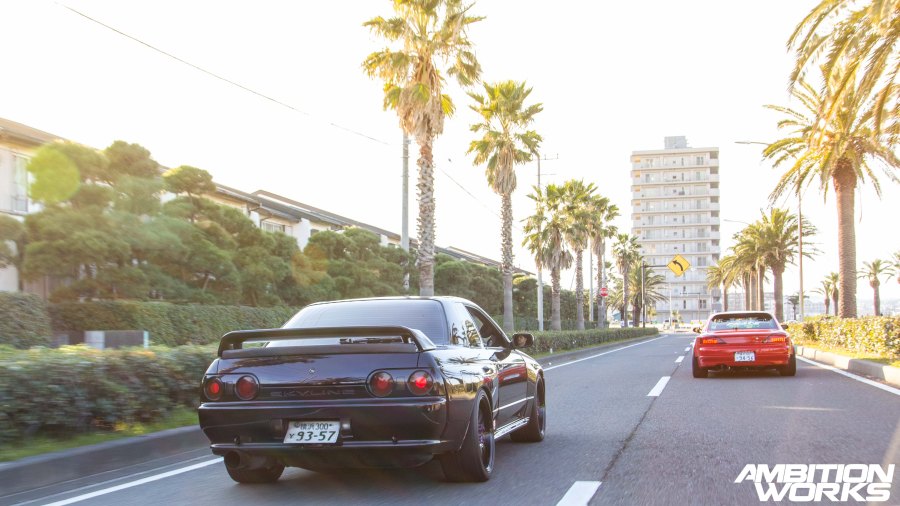 These next few shots show the similarities to California and the vibe of how epic the day was. Palm trees lining the streets with cars blasting down them, it’s like I was in a movie. We went back and forth a few times over, just taking in the surroundings and enjoying the last hour or so of sunlight. 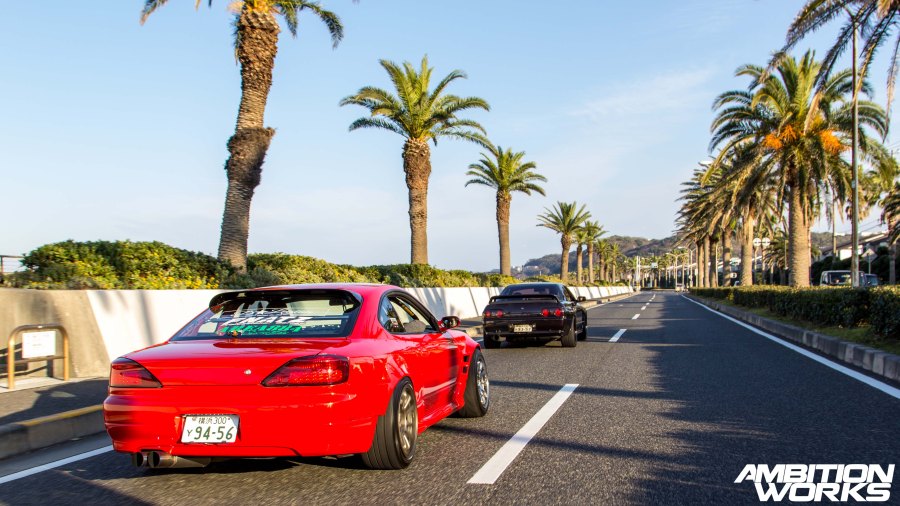 It’s crazy to think that a day like this came out of no-where. If it wasn’t for the FB page, I would have never created these connections, that I would still have nine months down the track. Nine months, it took a while, but it’s finally reaching the internet. People are super kind in Japan, these guys weren’t even Japanese. They are from America, but still showed me great hospitality.

The boosting continued for a while longer before heading back to the train station where I came from, to end one of the most memorable days in Japan. The boys put on a great show and took me to some great places with visually pleasing sites. 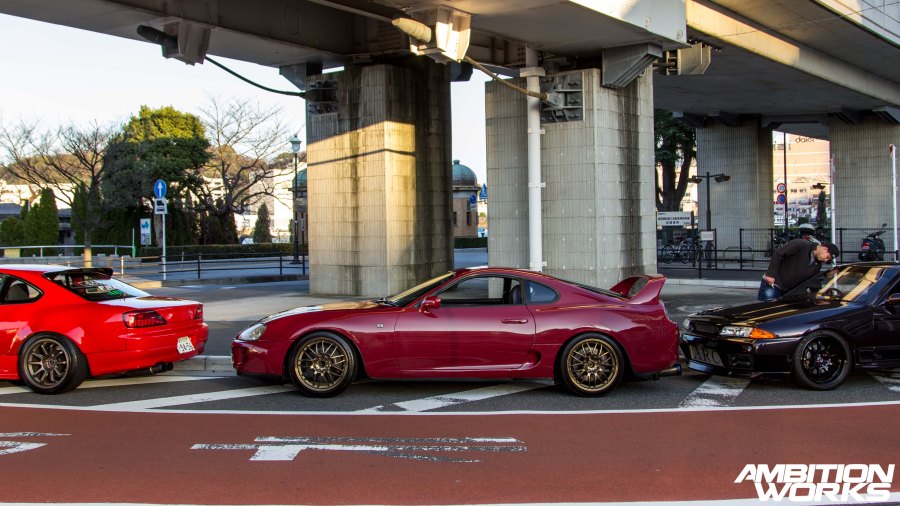 The time had come to say goodbye to some new friends, we chilled out for a while longer at the train station before my train arrived. I watched them boost off while I waved goodbye to a massive amount of horsepower. It’s not often you get to experience something that makes you feel like a little kid again, so for that I’m truly grateful.

Thanks to Jeff, William, Joshua, and Kevan for coming out and spending the day with us, I won’t be forgetting it soon. Next time we meet, hopefully I’ll be able to drive along with all of you. This was the story of four army men showing a tourist a side of Japan he had yet to see. I hope you liked it. Stay tuned for more content from Japan coming soon.

One thought on “Yokosuka: California Dreamin”