Out of all the photo shoots I had done in Japan, this is the only one that fell straight into my lap by chance. An extremely slim chance. I don’t even think I had seen a Z40 in person before, as there aren’t any (or if there are, there are very little) of these in New Zealand (NZ). To be entirely honest I didn’t think the first generation Z30 (Lexus SC 300, SC 400, & Toyota Soarer) had a successor.

Truth be told in 1999 at the Tokyo Motor Show, Lexus displayed a sports coupe concept to replace the Z30. The very next year at the New York Motor Show the production version of the new Z40 was available for viewing. With sales to start in the following year. Production of the Z40 went for 9 years finishing in 2010.

The story of finding this particular Z40 starts in the centre of Tokyo. Shibuya to be precise. After spending the day with two friends from NZ, visiting garages such as Bee.R, we needed a place to park the rental car for a while before visiting Daikoku Futo PA and Tatsumi PA later that night. We found a random underground parking area, where we drove past this totally slammed Z40. As I hadn’t seen one before, I quickly made my way back to have a closer examination. Stickers from the likes of Fatlace, Illest, Stance Nation, and Offset Kings covered portions of the windows. So I came to the conclusion that It was a show car. I couldn’t drool over this car all day as we had things to do, so a couple of photos would have to make do.

Later that night we met up with some friends at Daikoku Futo, the place that I had been so eagerly waiting to go to for a few years now. I had a good look around the car park, it was absolutely massive! I just happened to find another Z40 hiding towards the front of the carpark. What do you know? It was the same Z40 that was in the random car park we had chosen to park our rental car. I saw a Japanese man standing next to the car, put my Japanese to the test and asked if he was the owner. He was. What were the chances? I then proceeded to show him the photos of his car from earlier today. He was also surprised! We exchanged Line (a Japanese messaging app) contact information, and I asked if I could meet up with him when I returned to Tokyo in a month or so, which I think he agreed to. 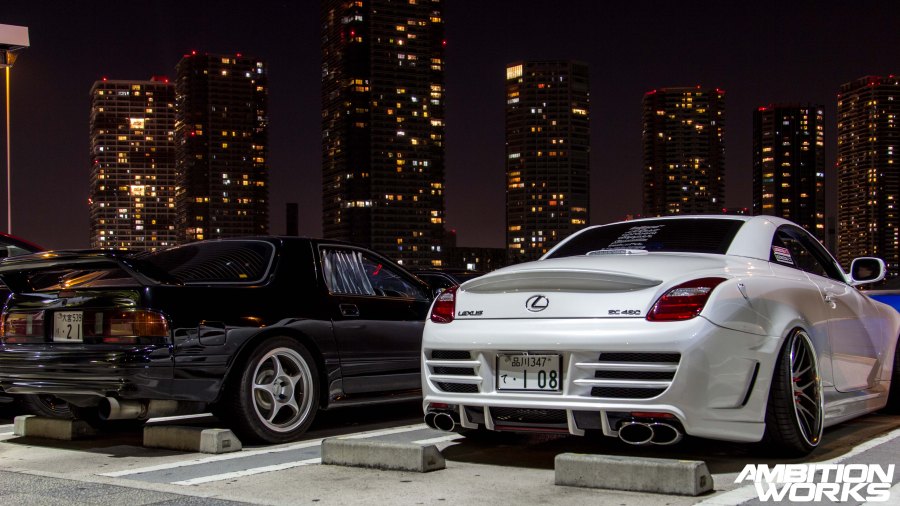 We spent a good hour or two at Daikoku Futo, before heading off to do some highway runs and visit Tatsumi. I was starting to think this was getting a bit ridiculous at this point, as I saw his car again at Tatsumi. That was three separate places all in one day. I thought that was rather interesting, to say the least, it was a sign that I had to meet him and his Z40 when I returned.

I then left Tokyo, for a month to study Japanese in the Tottori prefecture. During this time I chatted in Japanese to Daisuke-san through Line about sorting out a date and time to shoot his Z40. The date that worked for both of us was New Year’s Eve. Fast forward a month and a bit, and we arrive at the 31st of December, the day before the New Year.

I managed to find Daisuke-san who was parked over a few roads next to what looked to be a group of street racers. The Z40 looked a whole lot more luxurious than the street racer’s cars. Daisuke-san at a guess was in his 40s, with a family back at home. So he had taken time out of his day to come and meet me at Odaiba, what a legend! I thanked him by giving him an omiyage (gift to show my appreciation), we then made our way to hunt for a good location.

It took us over an hour, going through underwater tunnels, over bridges, getting denied from certain places, until we found a location that I thought would have to do, as we were losing sunlight extremely fast at this point. I hadn’t really taken photos of a car of this style as of yet, as NZ doesn’t offer many cars like this. I was really excited!

I think my two favourite features about this car had to be the automatic retractable hardtop, turning it into a convertible, and the air suspension set-up that had been installed. I actually asked Daisuke-san to move the car up and down a few times, as well as open the roof and close it, as it intrigued me so much. We were rather lucky with this location. It was a carpark, but no cars occupied down the far end for reasons unknown to me. So we utilised the area, with the sun setting at the opposite end, it pushed some great sunlight over to us and onto the white Z40.

If you can see the little bit of red popping out of the cabin, your eyes aren’t playing up. The Z40 was fitted from the factory with all-leather interior with brushed aluminium accents; Daisuke-san has gone and chosen red leather. That’s a very out there combination, that is similar to the older Nissan Fairlady with the full velvet red interior. As for the convertible body, some convertibles just don’t suit the look, like the S15, or the 350Z. The Z40 however, suits the look perfectly in my opinion. 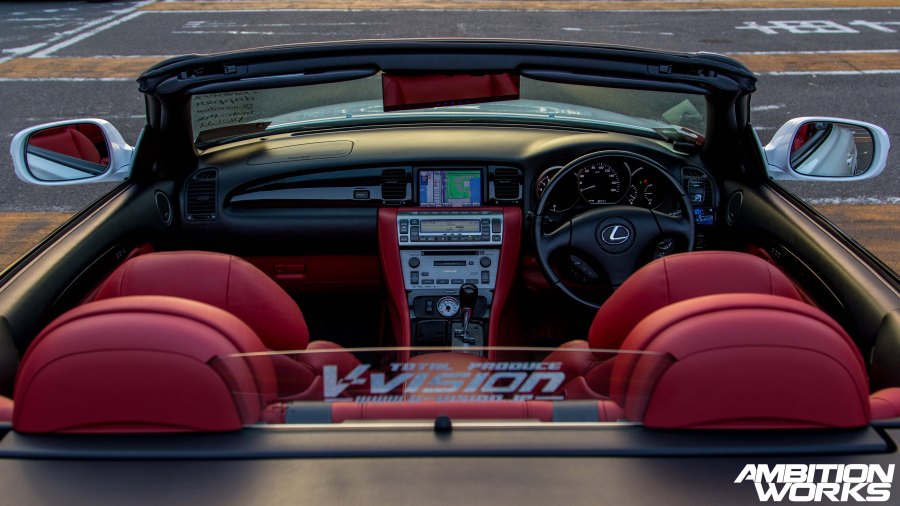 The interior was really neat and tidy. Only a few aftermarket modifications had been made. Like the boost gauge next to the gear stick, as well as a removable gauge on the left to the steering wheel. As you can tell from the headrest positions, it’s not really a four-person car, with little to zero room in the back seats, it’s much more suited to only two people.

Sadly the option of coming in the 5-speed manual like the first generation Z30 was not available with the newer Z40s. So every single one that left that factory had a 5-speed automatic gearbox (01-05) or a 6-speed automatic gearbox (06-10). Neither of which are a suitable option when you have so much potential to have a real luxury grand touring car available to the market. Where is the manual option? 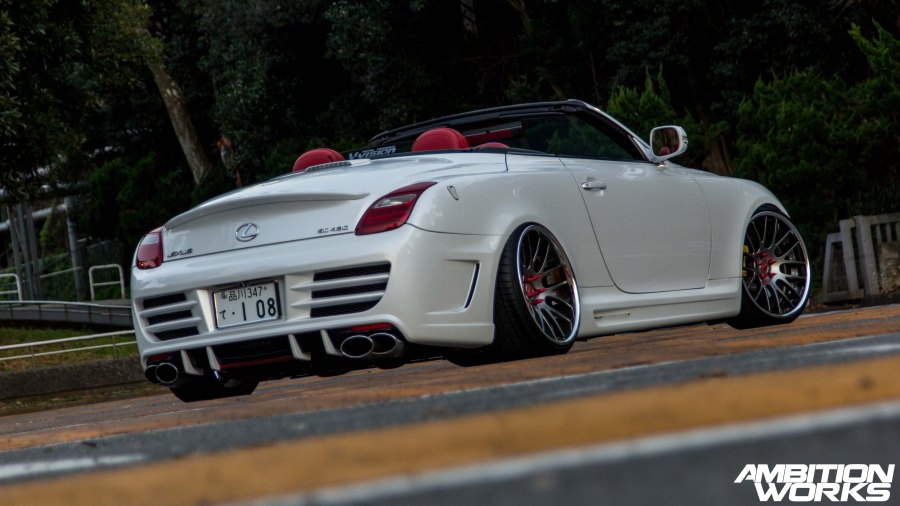 Daisuke-san has done a great job on his Z40. The modifications are little, but of quality and taste. The exterior looks up-to-date with the addition of a rear bumper, side skirts, and a front bumper from V-Vision who make a lot of VIP looking body kits for vans and long sedans.

The factory wheels were a no-go when turning this into a show spec Lexus. The already massive 18-inch aluminium wheels were replaced with a set of 20-inch flat titan silver SSR Executor CV03 wheels. The massive 20-inch wheels are wrapped in some low profile sports tyres.

When lowered the wheels tuck in so much that the guards are actually sitting on the wheels. I asked Daisuke-san if it could go lower, but he refused and said without adjustments to the wheels, this is as low as it will go at the moment. The SSR wheels are 3-peice and cost over $1,000 for only one wheel. So that’s over $4,000 in, I’m assuming, American currency – not cheap.

Attaching the set of SSRs to the hubs are some colour matching red look-alike 326 Powered spiked wheel nuts. Sometimes these can look okay, I think in this situation they suit the car and bring the interior colour to the outside. In other situations, when the wheel nuts stick out 20mms from the wheels, it doesn’t look the greatest.

While updating the wheels, the original brakes have been replaced with a set of nice big Brembos, providing the car with lots of stopping power for the 220 kW Z40. It’s not a light piece of metal though, but then again it’s not the heaviest thing out there weighing in at just over 1,700kgs.

Additional lights have been added to the V-Vision body kit up front and down back, giving it a more aggressive look during the night. I’m glad Daisuke-san decided to upgrade the body kit as the original one from the factory is an eyesore, to say the least.

Looking at it from the rear, there isn’t much of a roof at all. The only rear window is the small piece of glass between the two rear headrests. You would not want to flip this car over with hardly any protection, but I suppose that’s the case with all convertibles. The sun had vanished too fast for my liking this afternoon, so we had run out of time by this point. Daisuke-san had to get back to his family for New Year’s Eve, and I had another date with Daikoku Futo and Tatsumi.

It’s Lexuses first convertible – the Z40. A car that was marketed as the “jewel of Lexus”. Reviewers from Car and Driver magazine stated that it was “an unqualified success”, calling it “comfortable, fast, smooth, and quiet”. However, Top Gear’s old presenters Jeremy Clarkson and James May, for one episode, chose the Z40 as the worst car ever built. What do you make of it? Do you like it, or think it’s a waste of space? I sure loved it and agree that it was extremely comfortable, fast and smooth.