We’re just over halfway from releasing all of our Japanese content right about now, what an adventure it was, and to retell it, well most of it, all again, is another adventure in itself. This instalment is from a little prefecture in Japan called Mie. A friend of a friend. Kousuke-san was first introduced to me at my university in Auckland, NZ. Well, not physically introduced, but his friend Yukari-san mentioned that he was into cars, just like me. After this topic arose, the conversion flowed with ease.

When I had the opportunity to visit Japan, I had to make sure that I went and visited my Japanese friends in their hometown (Mie prefecture). Yukari-san, and luckily enough, Kousuke-san lived a short train ride from where I was staying. I hadn’t planned to meet Kousuke-san that day, but because of my great interest in cars, I asked Yukari-san if we could organise a little get together.

That’s just what we did. Kousuke-san owns this properly slammed Honda Odyssey. Before we headed off to find a suitable location to shoot the car, JDM fuel needed to be sourced so we could make the trip. I went to two gas stations during my stay in Japan, one of which we didn’t even have to open our doors. At this one however, Kousuke-san did everything himself. Not too sure as to why, but at least it gave me a chance to get that typical ‘Japanese gas station photo’.

Just looking at this photo you should be able to see why I described the Odyssey as ‘properly slammed’. The side skirts themselves are nearly touching the ground, and these aren’t massive side skirts. So what does that mean for the chassis rails? From driving around in the car for an hour or two, I can tell you that it meant the chassis rails were in contact with the road more times than not. That’s okay though, it’s his car and that’s how he likes it.

It was a rather sunny day with no clouds in the sky – a little bit chilly – but a nice day in general. We found a shipping dock that would suit our needs perfectly. It was mostly deserted, unlike the one we went to in Osaka (which you will see in coming articles).

If you’ve already scrolled through everything without reading any text, you would have noticed no engine bay shots, even though you can see the intercooler. You may be thinking “why the lack of photos?” Well maybe you guessed it, or looked closely at the piping. That my friends, is a JDM interfooler! I asked Kousuke-san why he put that there when it does nothing, he replied with something along the lines of “I like it, it looks cool”, he obviously doesn’t care what other people think and to be truthful it doesn’t look too bad. 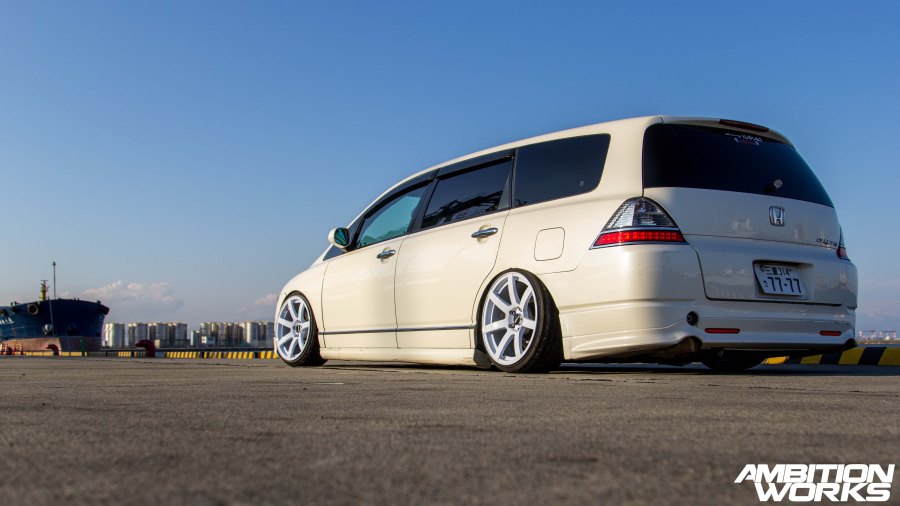 Tucked into the guards are a full set of Origin Labo DRF-S7 wheels in white. I was rather surprised to see branded wheels on this car, going with the interfooler trend, I thought maybe the wheels would follow the same pattern. Thankfully not.

It’s a rather sweet car to be rolling around in on a daily basis, and I can see why Kousuke-san enjoys having it looking like this. I sure did enjoy the drive, having the chassis scraping along the ground was an interesting feeling, to say the least.

Although the interfooler doesn’t actually do anything, he’s put in the effort to at least make it look real, by relocating the number plate to the typical side mount location. The front lights also look menacing with blue daytime running bulbs added in. 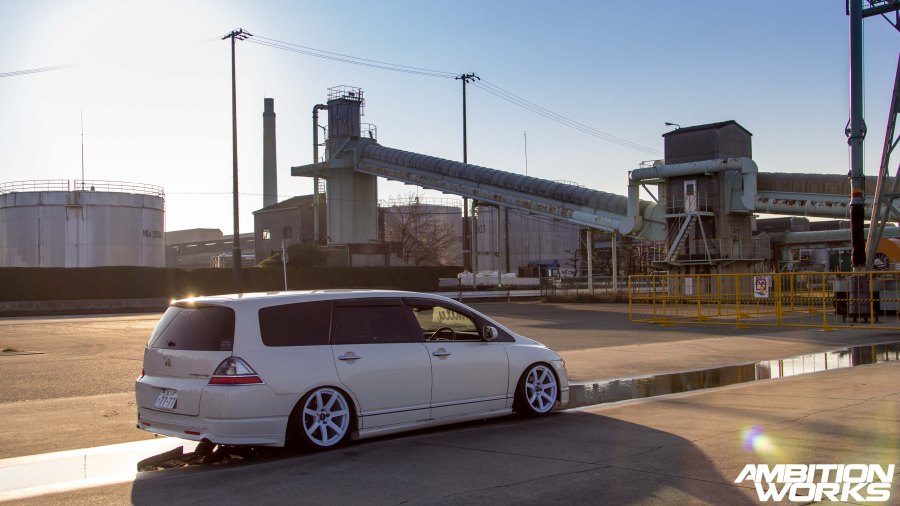 I can confidently tell you I wouldn’t mind driving this slammed piece of metal around town, but maybe not in New Zealand, as it would most definitely get stuck somewhere along the journey. I didn’t focus on the interior, as I wanted to keep the attention on how it looks to a pedestrian. However I’ll just say this; the interior was very VIP spec.

In good old Japanese fashion, the sun would set way too early, leaving us with only a few more minutes of light to enjoy the day’s activities. We headed back to the main train station in Ise-Shi where I then made my way back to my accommodation. Tomorrow was the day when I headed back to my favourite place in Japan – Osaka! Stay tuned.