The next stop on our list, the place every car orientated person knows about, the place where magical things happen. It’s those two infamous parking areas in Tokyo, Japan! Daikoku Futo and Tatsumi. 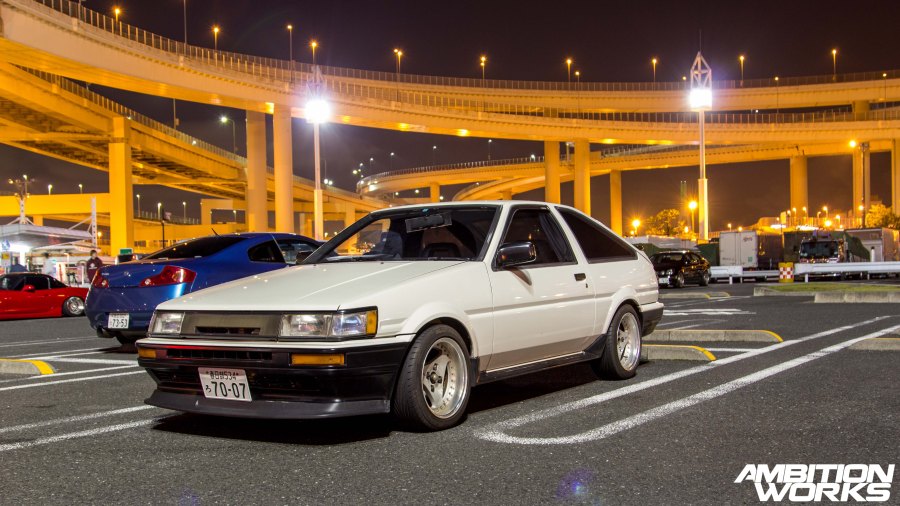 Finally after so many years of looking at other people’s photos and videos from these areas, I was able to experience the god damn goodness for myself, and boy was it good.

If for some unknown reason you’re reading this article and have absolutely no clue what I’m talking about. Daikoku Futo PA is a truck/rest stop on Tokyo’s C1 tollway road. We payed just under 1000 yen to get on the tollway, then drove on the somewhat long bridge connecting the island that Daikoku Futo sits on to the mainland. We went down multiple sets of twirely loops to get to the very bottom to the place that probably is home to the most exciting parking lot in the world on any given night. 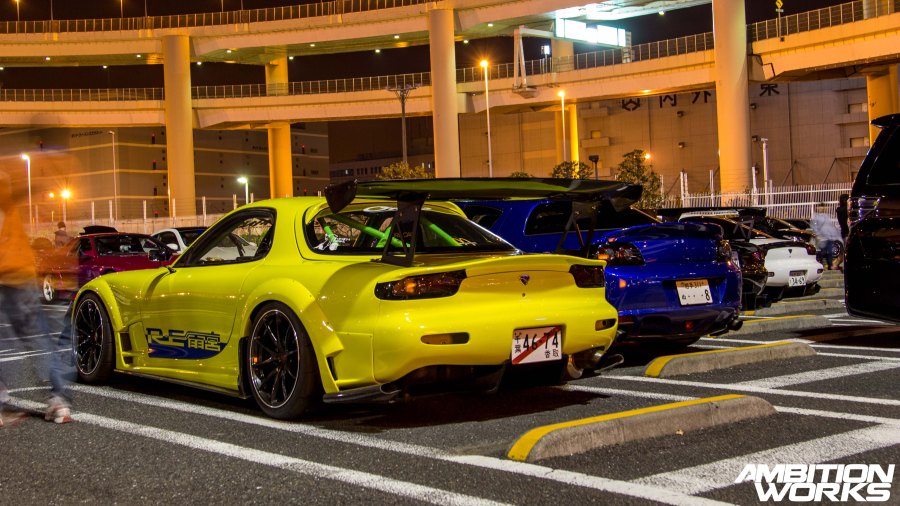 As luck would have it, we arrived on a night where there was a special get together on. That get together was for rotary owners and their rotary powered vehicles, what a bonus!

The main point of this Parking Area is for truck drivers to sleep and/or rest, as well as commuters to take a break from the long Japanese highways. There are plenty of vending machines, toilets, and even a restaurant present. Stay the night if you want, the services are there.

Previously this year, I headed to Europe and did the touristy things like visit the Eiffel Tower, go to Rome, and so on. It was good, but I wasn’t like whoa, this is AMAZING. This however, was different. This was a real WHOA moment, one of those moments when you think: is this actually real? Am I actually here? I was, and it was an unbelievable feeling. 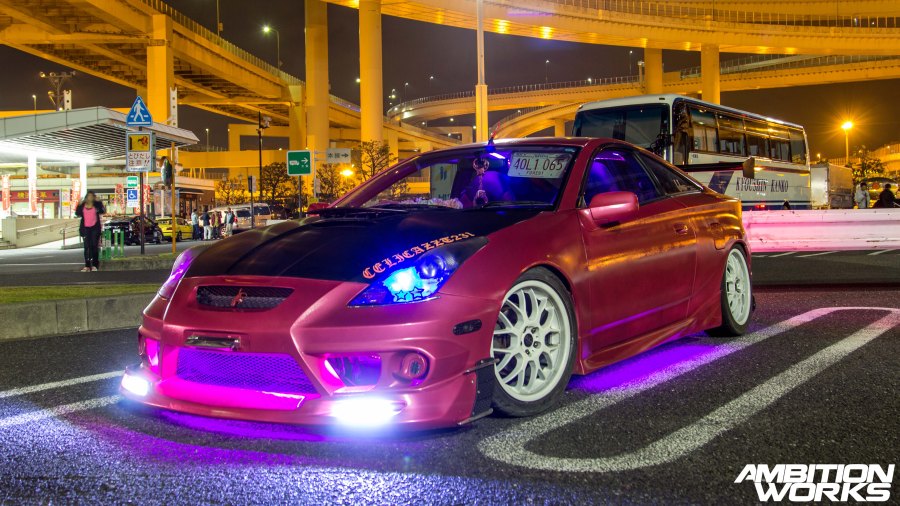 As soon as I got out of the rental car, I was jumping up and down like a little child. I’d never been this excited in my life, I had no idea where to start, what lane to crawl down first, what area to visit or what cars to start taking photos of! It was overwhelming, but I was loving it!

The cars were crazy, on another level. Music was playing from several different locations as people showed off what their car could do. The owner of this car was also playing with the air suspension putting it as low as it could go until the chassis just couldn’t go any lower.

We had a couple of hours at Daikoku Futo Pa, so now I had the challenge of scouting the whole car park and finding the cars that jumped out. The ones that you just don’t see in New Zealand, or anywhere else in the world for that matter. There was a decent sized crowd sitting around this Skyline, so I followed suit. Once everyone had shifted, I got my 30 second shutter on and took one of the many photos I’d find myself taking that night.

The only problem was, with a 20/30 second shutter, and no external lighting is that people would walk into your shot being none the wiser. As you can see here. Usually I would just scrap the photo, but when a Lamborghini like this shows up, that would be considered murder.

Lines of RX-7s filled the car parks. Ten, 20, even maybe 30 were present. A whole range of styles, different front end and rear end conversions, big wings, small wings, full race ready RX-7s and stock standard daily RX-7s. I have zero knowledge of rotarys, but to hear so many in one place was pure heaven to the ears. 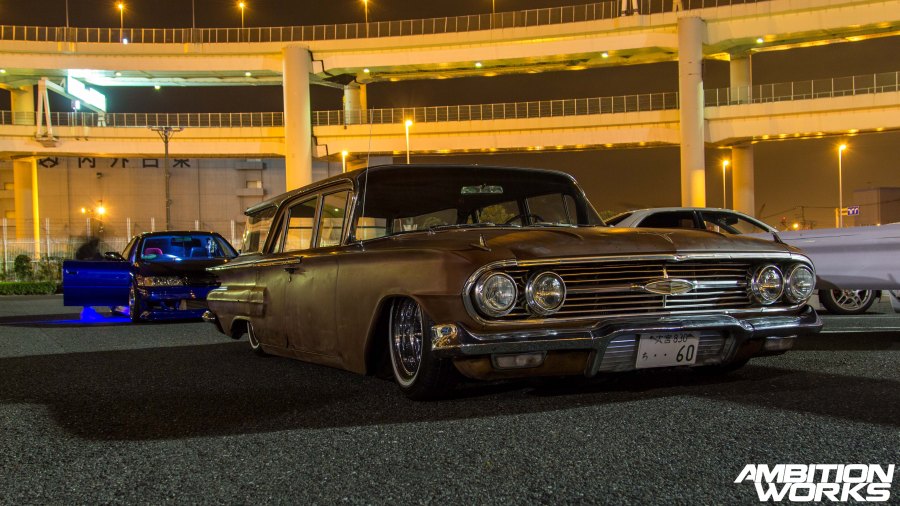 Sure, it was a Rotary night, however that didn’t stop anyone else from turning up. Cars from different countries showed, different eras, different cultures, and so on. Anything you could think of you would probably find hidden in the parking lot at Daikoku Futo.

A crew of old school japanese cars were hanging behind the trucks. The banner on this shark nosed one says “waiwai-works”. What the meaning of waiwai is I have no idea, a garage or workshop, or even someone’s name perhaps? There are a whole lot of surprises and mysterious things in Japan, and this is just one of them.

While scouting the area for more cars to shoot, (as I was sharing the tripod, because some smart chap left his one at the apartment… Me.) A duo of initial D cars rolled off the freeway. The all original tofu delivery Hachi Roku, and a pristine yellow RX-7.

A couple hours had now passed, I had made use of the many vending machines and bathrooms. I’d been treated like a child in a ball pit. Now it was time to move on to our next location, Tatsumi PA.

After about a 10 minutes hike around the loopy C1 above Daikoku Futo, we arrived at Tatsumi PA. The place where hyper cars, fully fledged race cars, kanjo racers, and police all come to meet before taking laps on the C1 loop above and around Tokyo. 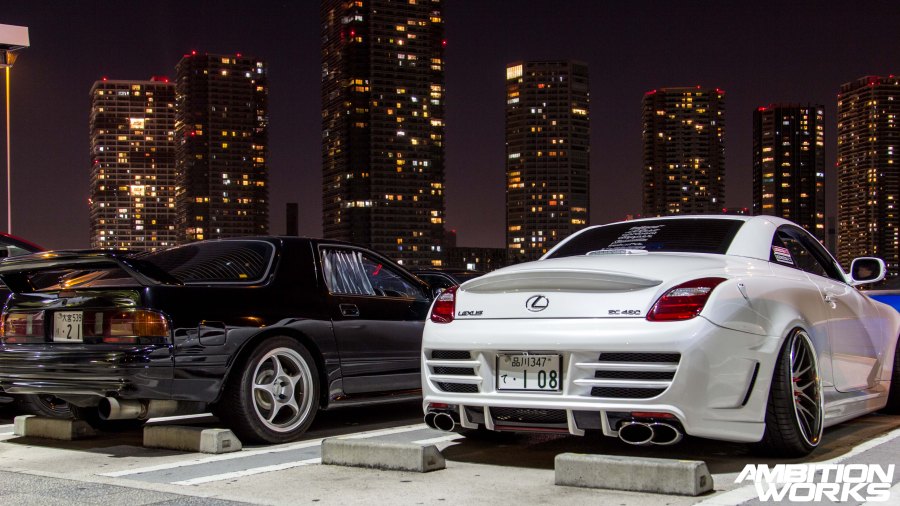 Again, it was another one of those “is this real” moments. This one was a bigger though. The view was just outstanding. The cars were lined up facing the multicoloured apartments, it was like a computer game had come to life right in-front of my eyes. 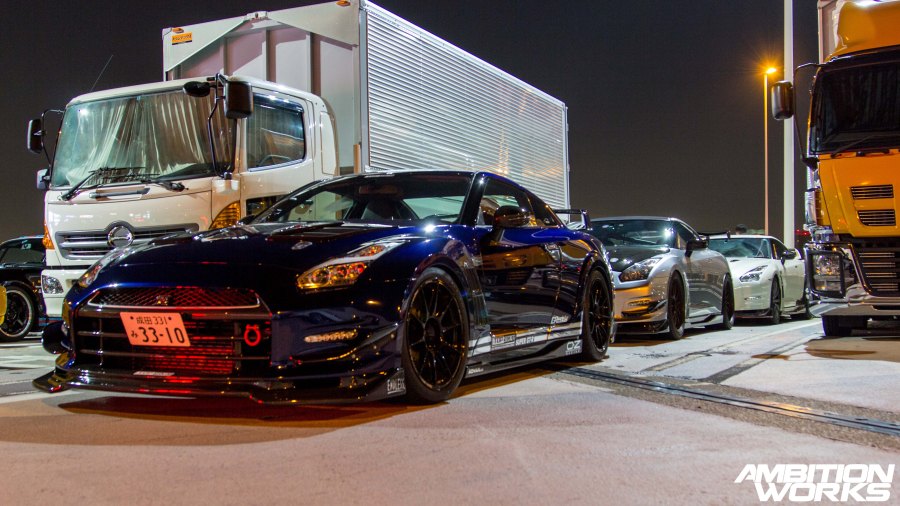 Supercars filled in the gaps between the trucks, as technically this was another truck stop. Here we can see three GTRs cooling off, either after racing laps of the C1 loop or waiting patiently to risk it all and take on the best of the best past traffic and sharp corners. It’s literally life or death.

If it wasn’t GTRs filling the carpark, it was race prepped Corvettes on semi slicks or kitted out Ferraris. Of course it wasn’t entirely filled with these dream cars. Sitting between them you could find those truly Japanese, Japanese cars. Sadly our time was cut short at Tatsumi as the cops came to push everyone out. 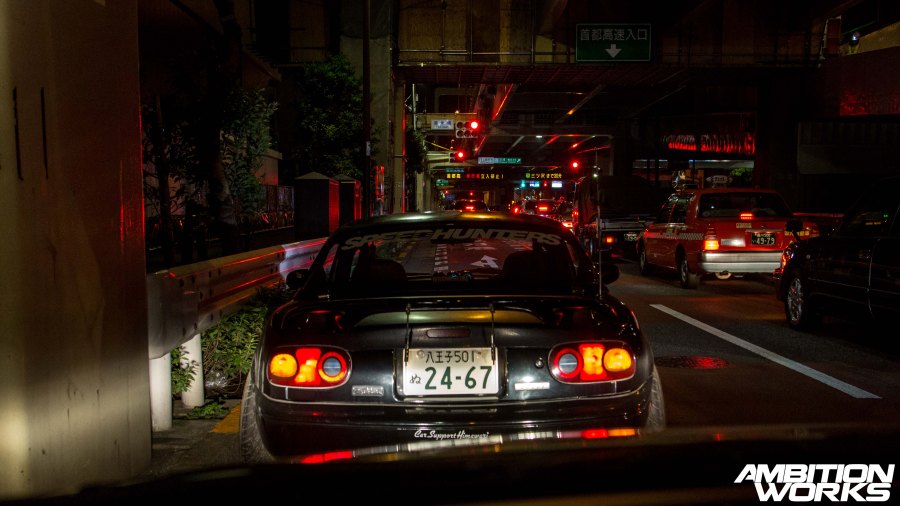 In our little rental car we followed our group of friends. Or at least tried to. Not knowing really which way to go didn’t end too well for us, and having a car as powerful as a potato didn’t help either. Thinking this MX-5 would know where we were heading was another mistake as he took us off the C1, meaning we had to pay another 1000 yen just to get back on. This happened twice that night. An expensive mistake you’d think we’d learn the first time round.

The last part of our adventure saw us meeting up with a smaller group of cars in an even smaller stop off on the C1 loop. This is the point where the night really got exciting, and I mean really. We were lucky enough to get a couple laps around the C1 Loop in a tuned R35 GTR with a semi professional racecar driver behind the wheel! What an experience that was, going an undisclosed (extremely extremely fast) speed zig zaggin in and out of what looked to be like stationary traffic. This is what I came to Japan for, this is what it was all about. Experiencing something that the Japanese talk about as a normal weekend excursion, but for me it was a drive of a lifetime.

It was now about 4am, we had spent an excess of 6 hours exploring the C1 loop and what it had to offer. An experience i’d never forget and recommend to everyone, even if you’re not really into the automotive culture that Japan has to offer! Although we had fun, speeding and going over the set out speed limit is illegal. Real punishments occur if you do get caught, we do not recommend (we really actually do recommend it because it was so much fun) replicating the above events. What’s next on this automotive adventure of a lifetime? Stay tuned because it only gets better from here.