Summer’s finally starting to hit us all the way over here in NZ. With the combination of that and daylight savings taking an hour off us, the typical NZ summer days are just around the corner. So in good old NZ fashion we kick it off with a MASSIVE family get together.

The Lifelong Ambition Corporation New Zealand otherwise known as LACNZ are a bunch of Kiwis with a can do attitude. Being somewhat new to event organising, these guys and girls put in the hard yards to make sure we had somewhere to enjoy those first rays of harsh NZ sunlight.

The location: Hooton Reserve in Albany just north of Auckland’s CBD. The massive privately owned car park could fit hundreds of cars without a problem. Or maybe a little problem as the car park filled right up within the first hour of the gates opening. 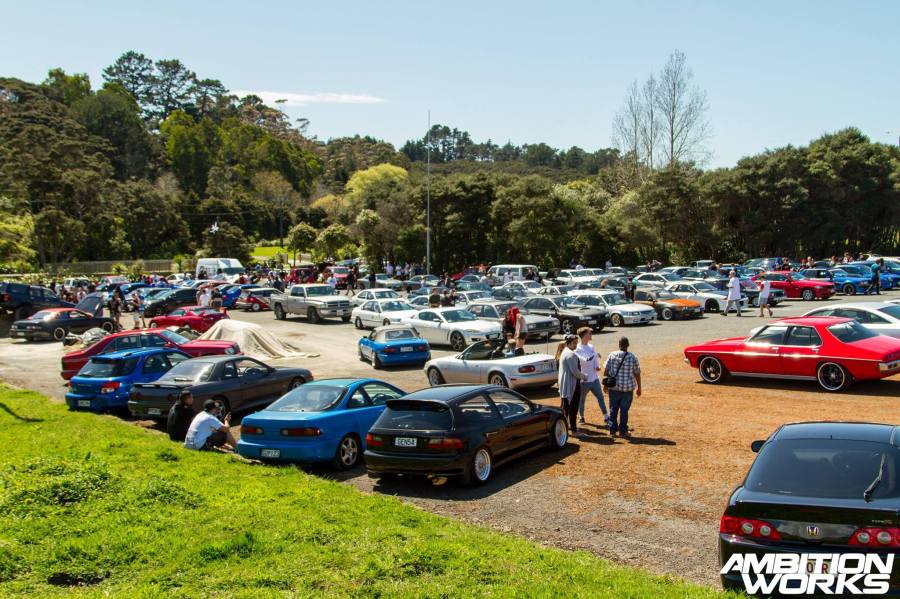 So the overflow car park was opened, and that also ended up full within an hour or so. An unbelievable turnout with cars from every era turning up to take in the first glimpses of the NZ summer sun. 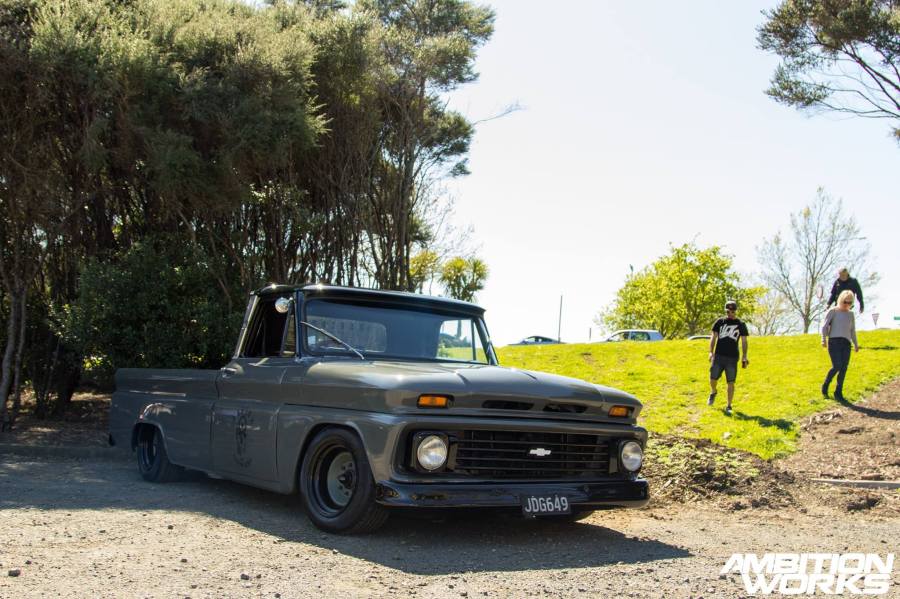 Among all of the public and their cars the LACNZ team had organised multiple trade stands to grab your interest throughout the day. Food, drinks, clothes, car parts, and even Mr. Whippy made an appearance at one point.

Among all of the sweet merchandise that was available, if you were lucky you may have spotted some free goodies that were being given away! This day just keeps getting better and better right? Some free demon energy drinks and original clothing by Ronio wouldn’t go amiss.

Alright, that’s enough about what happened at the event for now. Let’s get into some of the cars that turned up for display on the day! My general automotive knowledge is still rather lacking but we will start off with the car clubs or teams that caught my eye, even if it was only for a second. 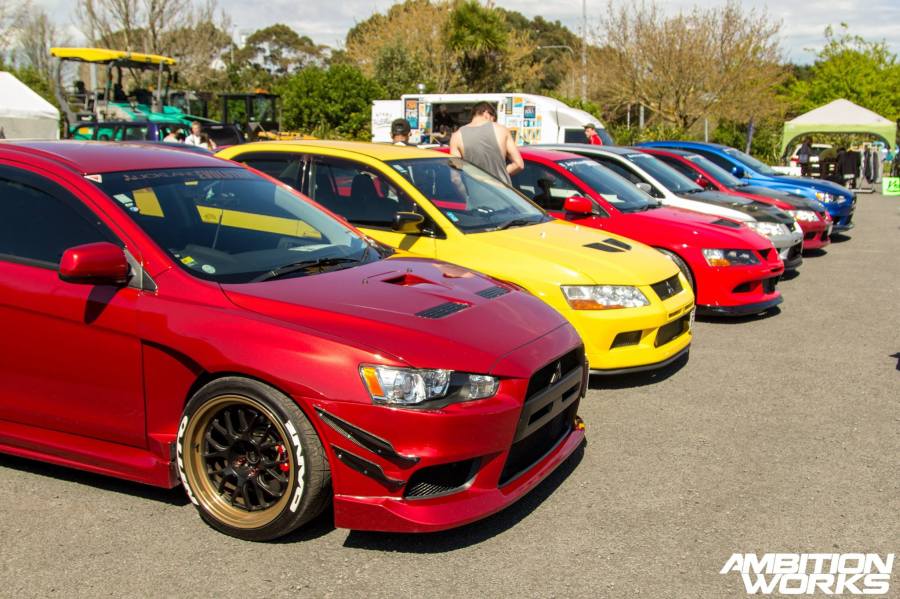 Evo heaven sat right in front of me at this moment in time. Six all lined up sitting pretty, however where were the older models? Auckland Evolution knows how to build a nice looking Evo that’s for sure even if they were missing the older generations from the line up. 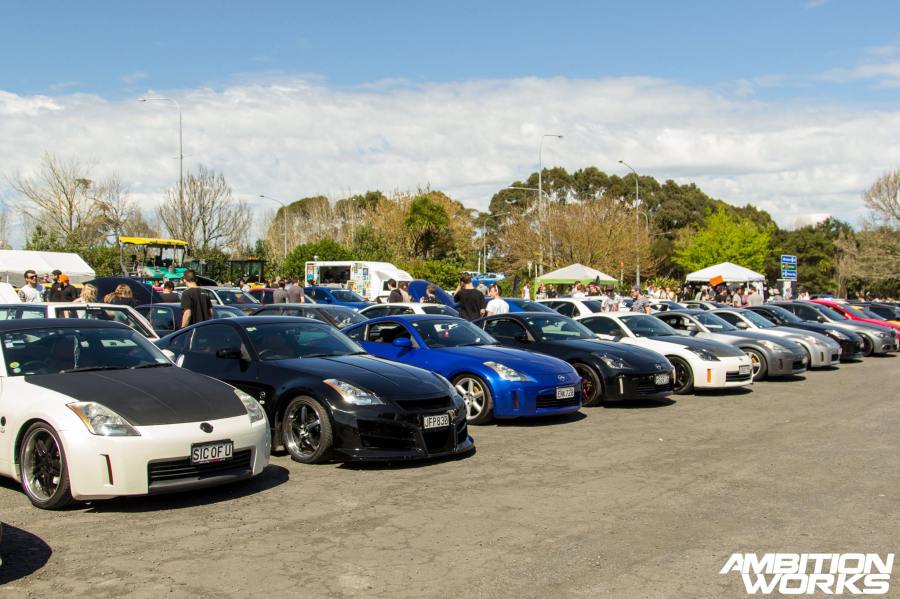 Probably one of the larger car clubs on the day with this collective of 350Zs. Now, I’m not entirely sure if they are a club or team. However they did a great job with about ten lined up all together, so many so that I couldn’t fit them all in one frame. 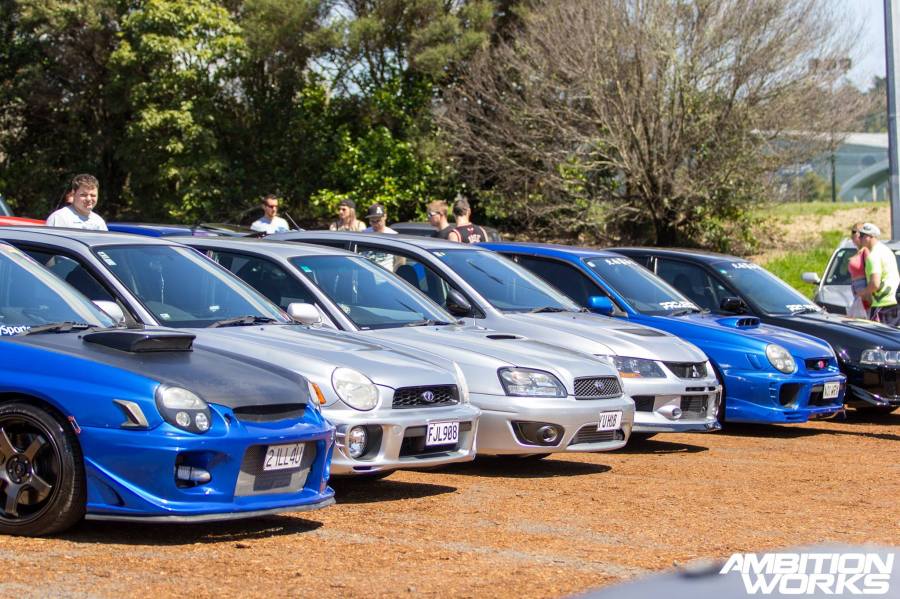 Ohh… If you look closely here, you can see the Mitsubishi Evolution sitting next to some Subaru Imprezas. These two cars have such a strong rivalry, so it’s great seeing them shaking up the boring-bag a bit.

The biggest group of cars in attendance was the S-Chassis Auckland club. With about 17 Silvias lined up in generation order from S12s all the way up to the S15. I might be a little bit biased here as I did organise this lot and set them up at the hard park. With only a few more Silvias we could have had a whole row to ourselves, now that would have been cool!

This car club here literally came out of nowhere. The first time I saw them in mass attendance was at the Ardmore Showdown and now they are everywhere. The Fijian car club has a huge range of cars as seen in this photo of just three of them. NFORCA, the far right car, has also recently been featured on New Zealand’s main automotive magazine, NZPC.

I’m not too sure who the next group of cars belong to, maybe Speedhunters? These guys had parked their cars so perfectly the asses just lined up with each other. It’s a photographer’s wet dream, if that’s not too graphic for your mind! Along with these car groups there were plenty of other clubs in attendance, but to keep this article somewhat short I’ll move on to some of the individual cars that stuck out to me.

When we’re talking about hard parks, the hardest thing to do is grab attention when there are hundreds of cars in attendance. This yellow RX-7 had no trouble with this task though. As soon as it pulled into the parking lot people were turning to have a sneaky peek at something that you’d think came straight from Japan. 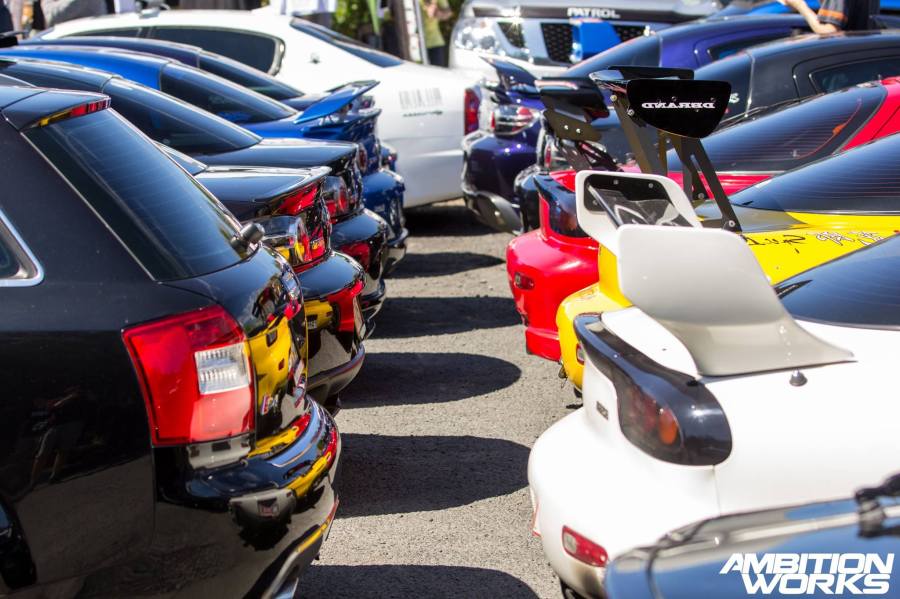 I’m not to sure what it is, maybe it’s the rarity of these cars and others similar to it like the Toyota Supra or Honda NSX, but they seem to have a certain aura around them. Something that the more common cars just don’t have anymore. It’s not something that can be done in a weekend, it takes years to gain a title equivalent to that of an RX7 or AE86 etc.

It’s not often big ass lifted trucks come along to hard park events in Auckland, as they are usually in the forest ripping up all the dirt and mud. However today was an exception, along with it’s lifted suspension and big mud tyres, the paint was… a bit different. Similar paint to the Silvias I featured in CHCH, but it really pulls it off well! 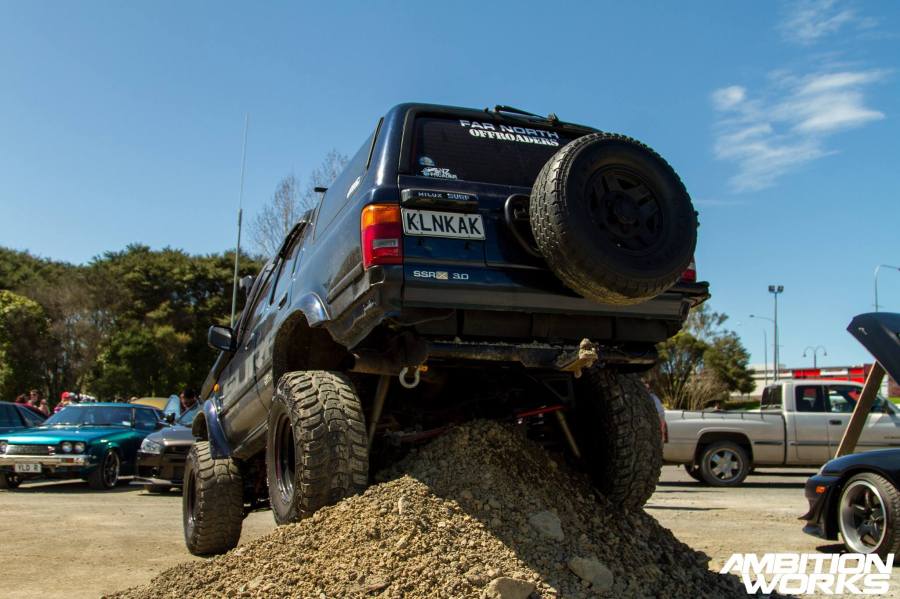 If that wasn’t enough for your daily lifted fix, I found another one hiding in the other carpark, or rather not hiding. If you’re not from around Auckland, you may not know that there is a rather big community full of crazy lifted trucks that go out to the forest and tear shit up. So if you’re interested in that sort of thing, flick me a message.

If lifted trucks aren’t your thing, how about some nice modified European cars? NZ is starting to produce some quality cars these days, and while they may not be hella cambered or have crazy styling, the cleanliness and attention to detail puts multiple points in my books.

Usually I’m not to much of a fan of cars slammed on air bags, this example caught my eye though. I’m not sure what it was, maybe that my favourite colour is red, but it really looks like a steal the show kind of car.

How about we wind the clock back a few years? I just love the diversity of the NZ car culture at the moment. Especially when you can head a short 20 minute drive out of the city and see all different car types at one location. Very convenient for a lazy person like myself.

Take this for example, I wouldn’t have a clue what it is. All I knew is that i liked it and it was from America. If you don’t currently live in NZ and want to come over for a visit, don’t be shy! Kiwis are very accommodating. Just make sure you come over on a weekend when lots of events are taking place.

Although it might sound like I’m bragging, I’m really not. I only want to share with you what we have and hopefully make overseas readers come to our beautiful country. There really is something automotive for everyone. Okay, that’s enough nonsense, back to the cars at hand… 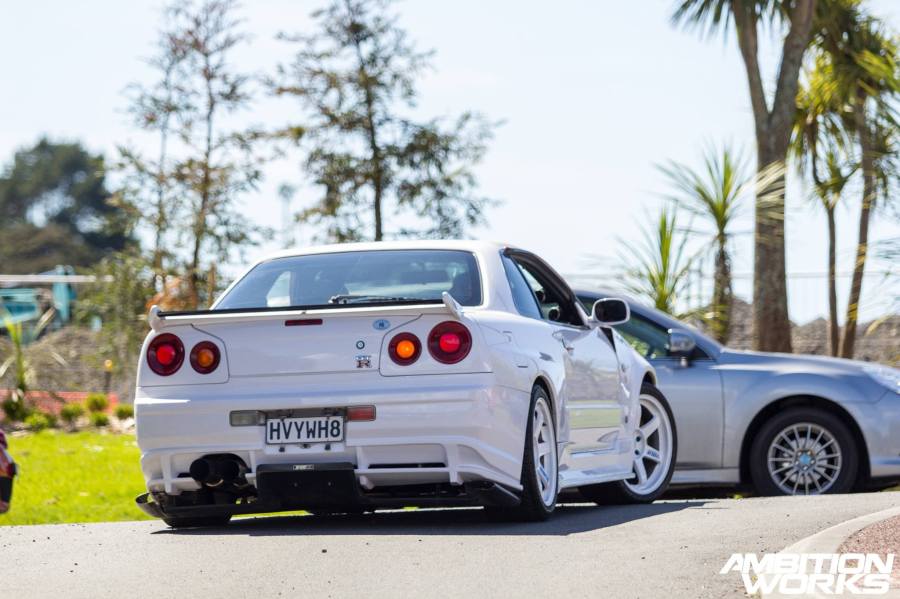 The next one that caught my eye was this really nice and clean R34 GTR. I really used to not like white on white a few years ago, now it’s one of my favourite colour combinations. The main reason as white shows up all the details extremely well.

Ohh, back to America for this green machine. I’m a sucker for low and long on old school American cars. Something about how it hugs the road is like candy to my mouth. I always imagine back to the movie Cars, when the fresh road has been laid down and they all go as low as possible and just hug it the whole way down.

It was hard to pick only a few Japanese cars for this article, as the majority were Japanese. For obvious reasons I had to include this super tidy Toyota Supra. As I said before there are not an abundant number of these left around NZ, so to see them in the flesh is always pleasant. 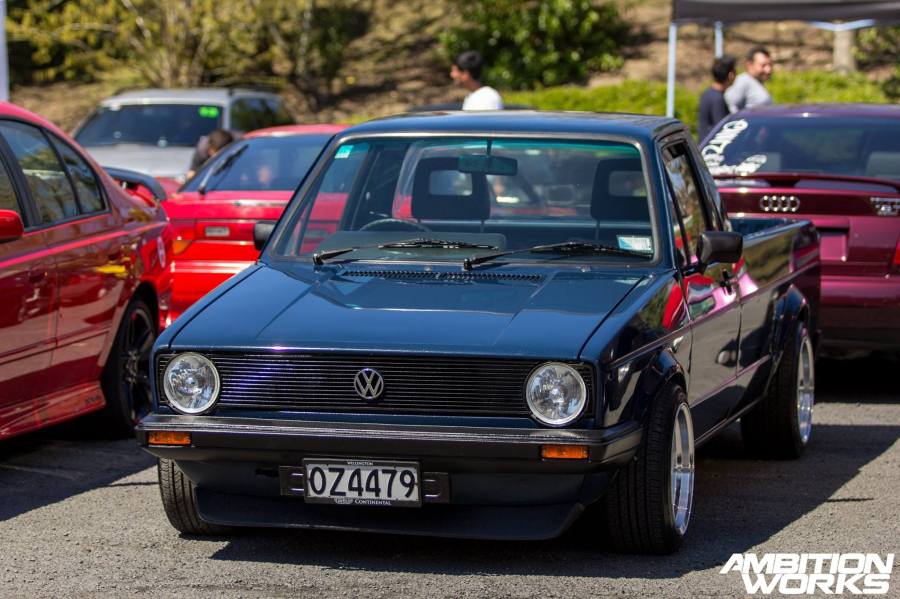 Again, I’m not too sure why but this nice VW ute really stood out. You don’t see many of these around Auckland, it’s a good change from the usual Mazda or Toyota ute seen everywhere. 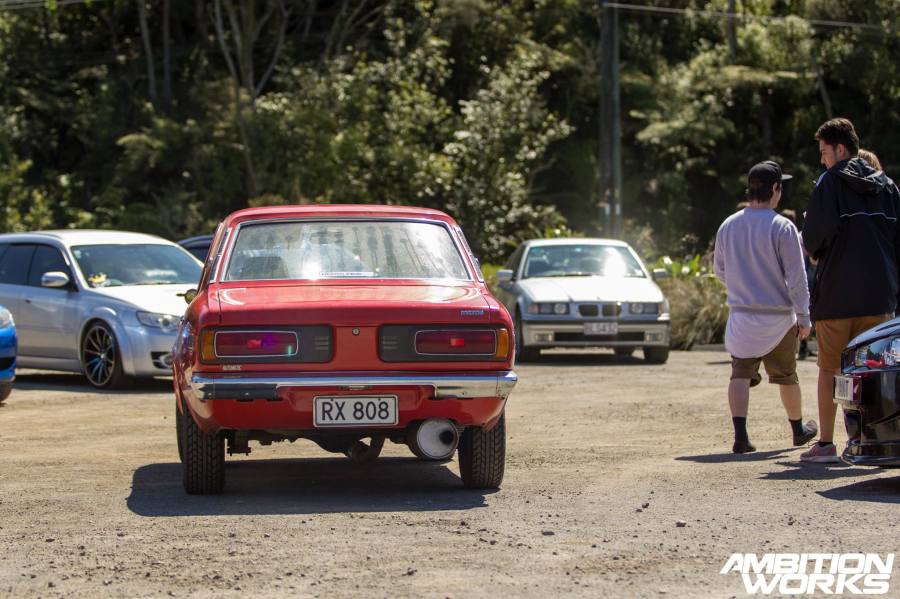 It was an extremely hot day, one of the first for us folk in NZ. This meant that inevitably people would start to slowly roll on out over the course of the afternoon. The best time in my opinion for photos and to hear what they are hiding under the hoods of their cars. 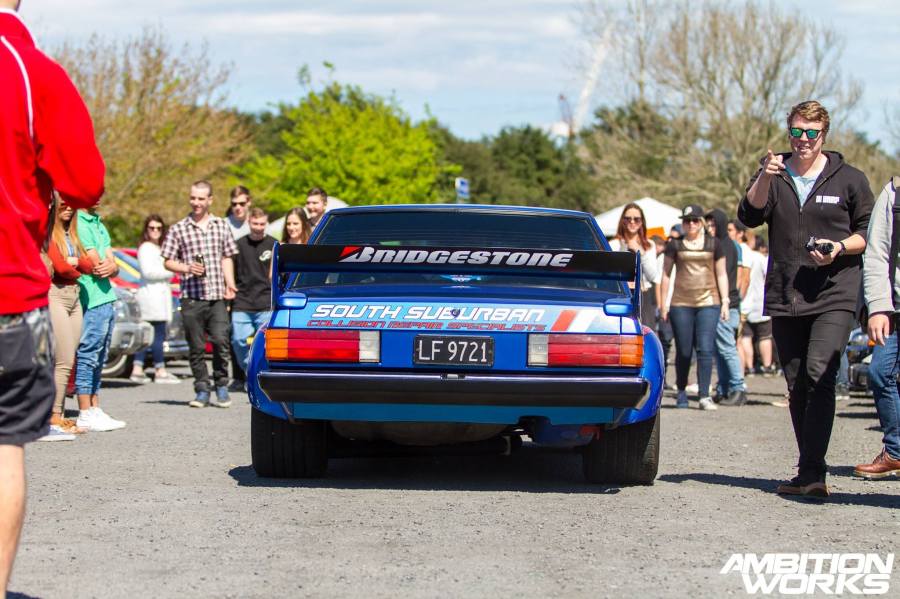 It was actually a rather chilled back little get together. Something that Auckland seems to be doing rather well lately. I think this image sums up people’s opinions rather well. A smile on everyone’s face, what could be better?

Summer in NZ as any other country is when the long car builds get finished up and they come out to play. I’m always surprised when the NZ summer season comes around at the amount of new cars that make an appearance at events. Let’s hope the rest of the coming events are just as good! 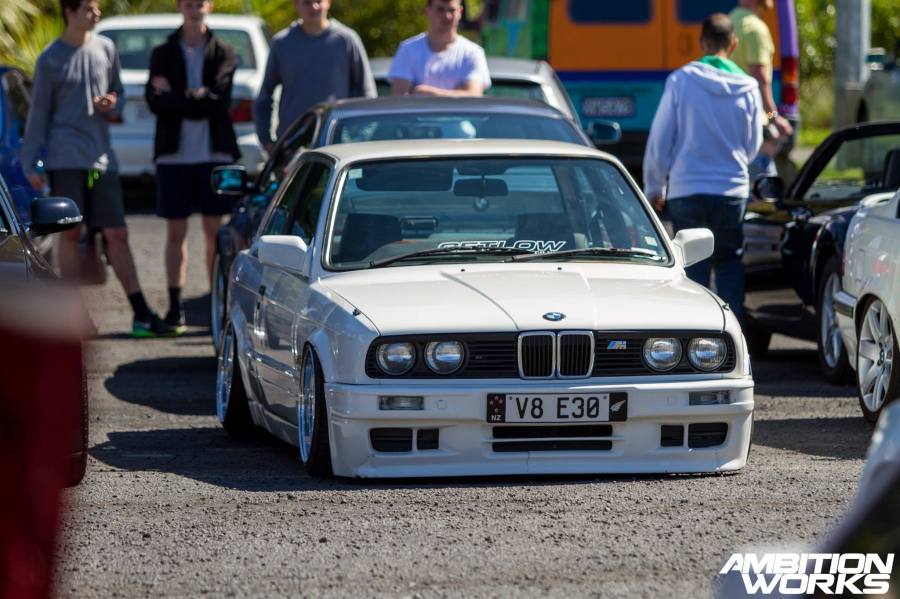 If I haven’t convinced you to come to Auckland from this article, I don’t know what will. The diversity of the cars are great, the culture is strong and the people are welcoming, what more could you ask for of a city of car enthusiasts?

Cars poured in for a few hours straight, but that time had now come to an end. If you’re stuck on things to do this holidays or even this coming labour weekend. Taupo Motorsport Park is the place to be, that is where Locktoberfest is happening run by Zeroclass Drift Events. Some of the sickest cars and driving in NZ come to ZCD events, if you want to know more just message us!

Unfortunately this will be our last article for this year. However, never fear! We are heading to Japan for a while and will hopefully bring back some awesome new footage whether they are car related or not. So in the meantime add us on Snapchat (ambitionworks) and Instagram (ambitionworks) so you can follow our Japan adventure as it happens! We will also be releasing new 2016 calendars before the month of January finishes, so stay tuned.

Thanks for an awesome year everyone, let’s make 2016 even better!