Auckland City, the City of Sails! As everyone should know with built up cities like Auckland, there are many rad backdrops to be found. So, on a fine Thursday night Carey and I went out and hunted for those oh so sweet backdrops. 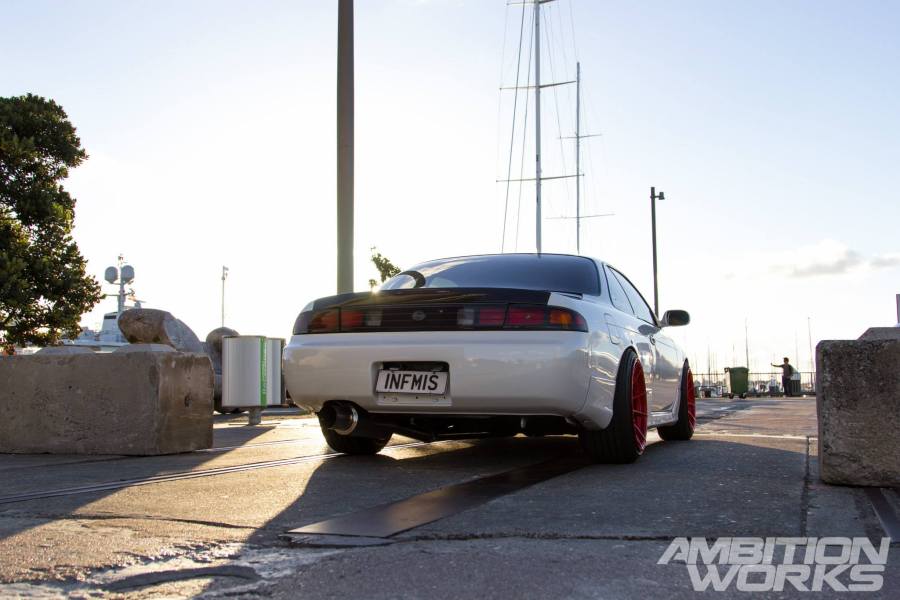 Starting out from West Auckland we headed into the city with an initial plan of starting at Wynyard Quarter. Over the last few years this area of Auckland has seen a massive improvement. Thanks to Carey he made a mad dash to get the car cleaned up after work, finishing up the little details on location. 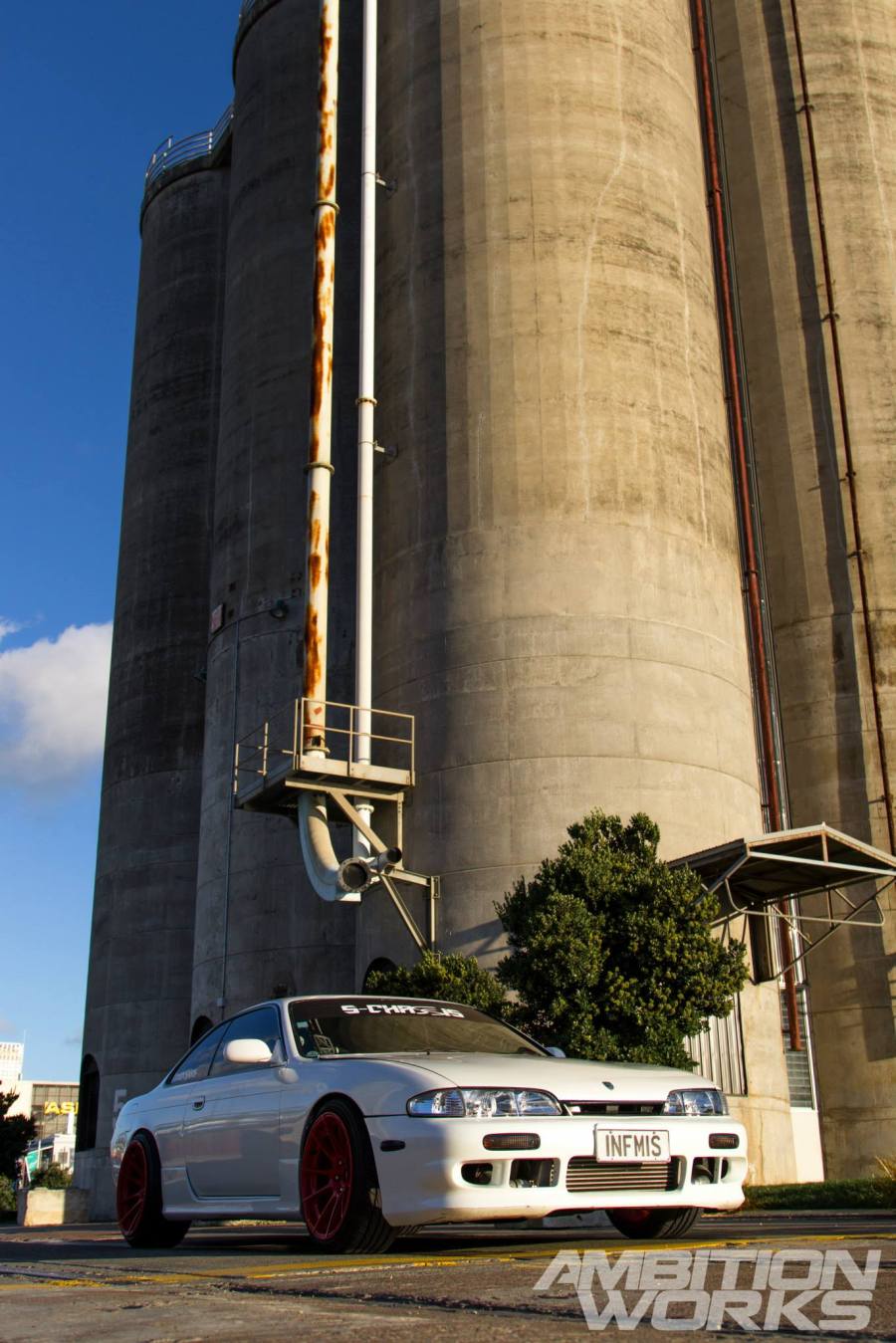 Silo Park get its name from the massive Silos that sit around the park. Every now and then feature films are projected on the Silos and are played for free to the public. Lucky for us very little people were present. Carey recently purchased new wheels for his Silvia. These are aggressive and the ass that the car now has is mind boggling. It always amazes me how much a set of nice wheels can transform a car. 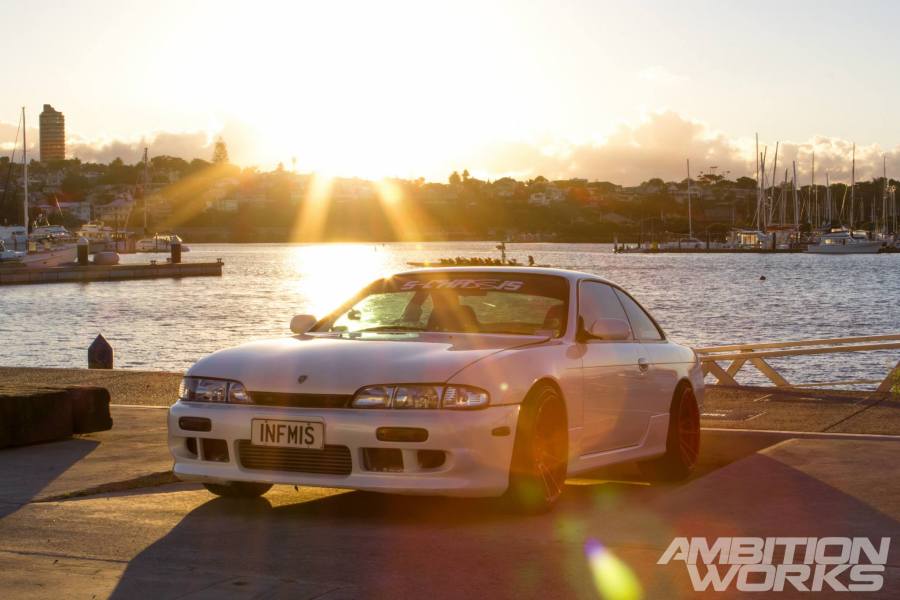 We got a few shots at the first location and then headed off to try find another – a place that Carey had been to years ago. After a few minutes of looking we found a random driveway and headed down it to find a sweet backdrop of the boats and the sun setting. It was about 8 at night and the sun was on our side, which made for some nice backdrops. Behind me, there was some concrete slabs that were about 4 or 5 metres high. So what did I do? I did the same thing any photographer would do when given an opportunity.

I Climbed. I Climbed up one, two, three slabs to get a whole view of the docks and the horizon. It’s all about the angles, and this one was a good angle. Along with the backdrop we had a good base for taking some breath taking images of Carey’s S14 Silvia.

Thinking I should get down before being told to leave, I had a closer look at what makes Carey’s S14 tick the way it does, because it is fast. In New Zealand we have okay modification laws. You can completely modify a car to be able to drift it and still keep it road legal. While the SR20DET still sits inside the car, Carey has gone through a few engines, gearboxes and diffs in his time. This is his drift car if you couldn’t tell. How he keeps it so clean is beyond me. 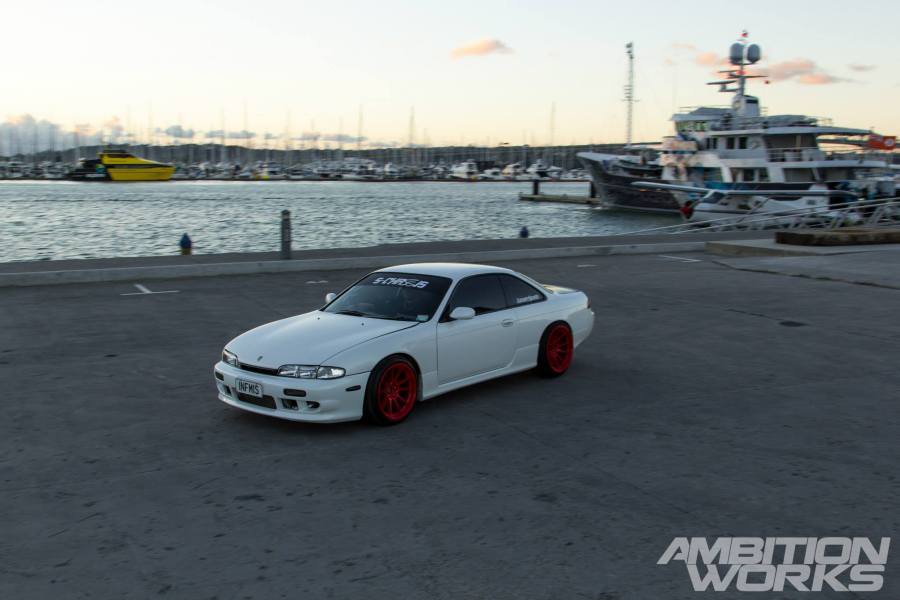 Having the sun set on us we decided to move on to another location which wasn’t far away. Right behind us actually. We had a view of some of Auckland City and the Sky Tower. Now, if you have never been to Auckland, one little fact for you. The Sky Tower can be seen from most if not all of Auckland and is one of the most famous man made landmarks in New Zealand. So It would be rude not to include it in some photos.

It’s crazy, how much a photo can change when you move the camera from face height and put it somewhere else. A perspective of a cat or a dog is what we have here. This is what I mean, you can have the Sky Tower showing up wherever you want in a photo. I could have even edited it in and no one would be the wiser if I did a good job. 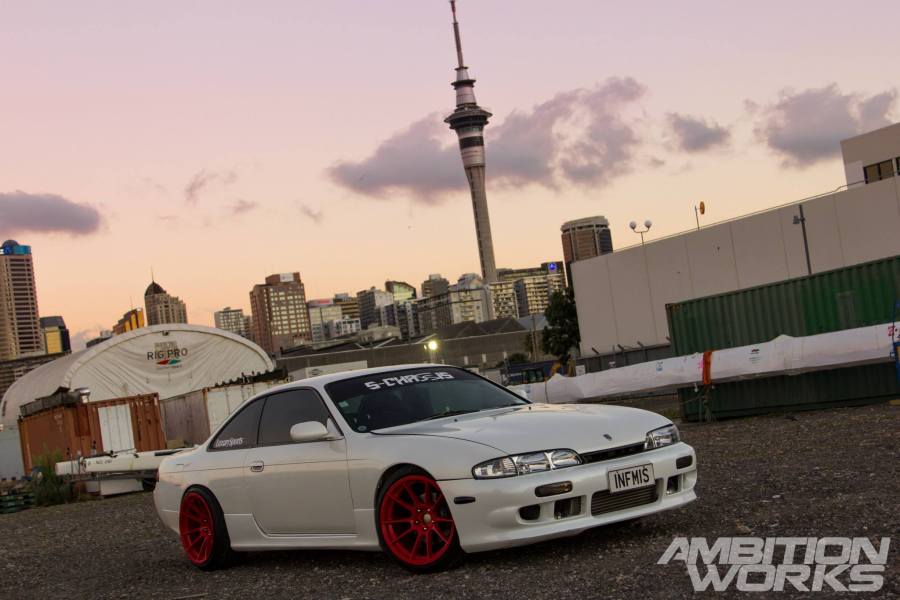 Carey has had this car for a long time. It’s part of his family. Just like dogs and cats, brothers and sisters. If you spend enough time with anything a bond will start to form. I know I couldn’t imagine selling my Silvia. Carey is one of those people you see in the news for protecting what he loves. It’s apparent when looking at his Silvia that he knows how to look after and treasure something worthwhile. 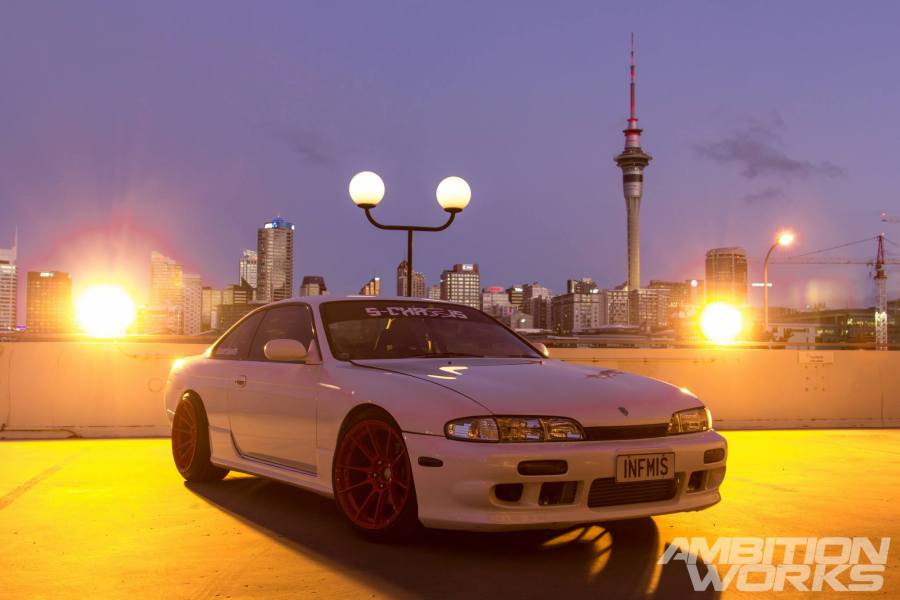 We pushed on and hunted for another location, and we found a good one, that’s for sure. This was on the second floor of a business block. The lights were facing up when we got there, we may have turned them to suit us, but rest assured we put them back how we found them like good citizens would. I wasn’t too sure how to pull this shot off. I wanted to keep the car white and stay away from the white turning to yellow while also showing up the wheels as the red they were. After many trial and errors we left with a few sweet images from location three that night.

The last location was to feature the next iconic man made landmark in Auckland. The Harbour Bridge connecting the North Shore to Auckland City. This was rather tricky as all I had with me was an external flash. But we do what we can and I used the headlights from the passing cars. So what turned out to be a boring mediocre day at work ended up as a rad day hunting for some epic backdrops around Auckland City with a menacing power hungry car at my fingertips!

Carey would like to thank Kayne Mitchell for fixing bits and pieces and modifying parts to fit. Corey Bowdler for the endless hours on engines and changing turbos on christmas, and all nighters to keep it going. Mike, Troy and Moss for helping with modifications, touch ups, parts and motivation. Ryan at Luxury Sports for the deals on parts. Frank at South Suburban Motor Bodies for the panel & paint over last couple years. Protune for the effort with tuning and acquiring software to fully tune the ECU. Chris at S-Chassis for the events, media and help throughout the years especially the headlights from Fitment Garage. Hanjar at New Lynn Motors for the countless tyres for him to destroy. Kyle and Donny for making up the interior. His family for putting up with him and his moods every time he works on his car until ridiculous hours in the early morning. Mark Browne for the hook up with wheels. Nick at Autotints for the shade. James Tomokino for painting the wheels. Toptul for supplying all his tools. Ian Parker, Andrew Shadget, Ravi, Cam Harris for the hours of wiring and electronics. Rick Bell for being his savior if/when the car breaks at events and needing trailering and also welding the manifold so I could make an event at midnight. Us here at Ambition Works for the time and interest for this feature. And everyone else who has helped and contributed time with this car. He would also like to thank himself for not giving up on his addiction of S-Chassis.

“Without everyone’s help and determination to always have it going for events to make big clouds and try please the crowds with this full street car I wouldn’t know where I would be!”