We’re pretty lucky here in New Zealand as far as cars go, especially with the Nissan Silvia. We get the very ancient S12’s, the S13 and 180sx both in SR and CA, with turbo or n/a. The S14, S14A and S15 all in SR being either turbo or n/a AND there are S13 and S15 convertibles scattered here and there. In New Zealand we are definitely spoilt for choice. On Saturday S-Chassis and Scarles hosted their 3rd annual Meet and Greet at Scarles’ recently opened store in Avondale, Auckland, New Zealand. What a turnout it was. 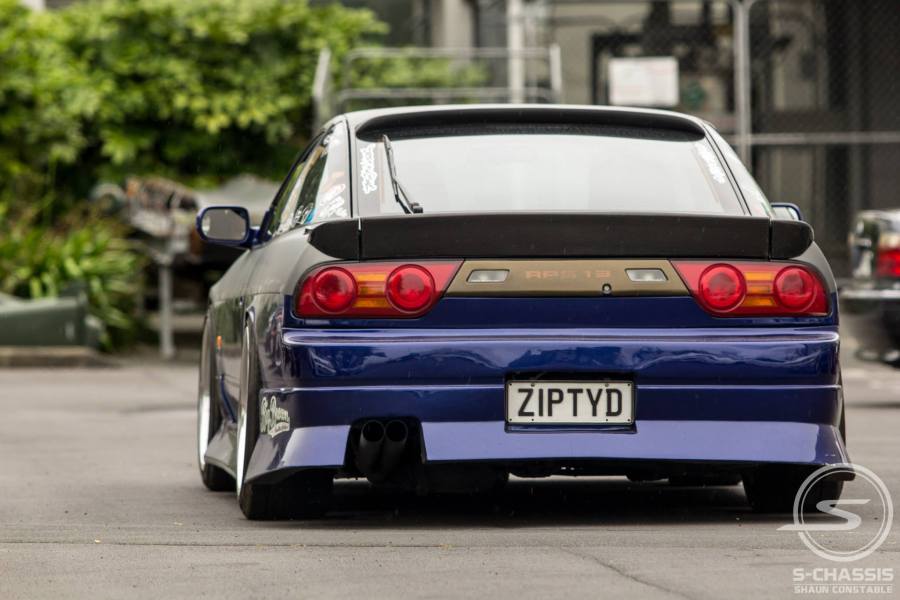 Although its suppose to be summer in New Zealand, Auckland can be a very tricky city to predict what will happen. Thankfully the weather gods held out till Sunday and only let out a few little showers here and there.

It’s rather staggering that I’ve had a S14 for nearly two years now and go to events every weekend, I still see new Silvias appearing out of the woodwork. Even though they are such a common car, people still find ways to make their one their own and unique to just them.

Scarles offered up 50 hats to the first people to arrive, so I thought I’d get in their early and grab one before everyone turned up. To my surprise upon arrival the parking area was already half full! 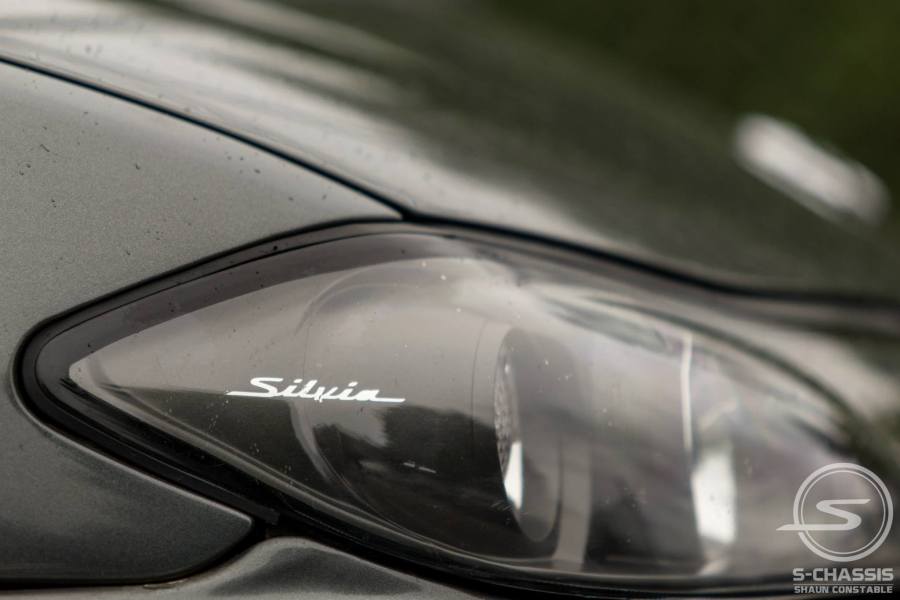 Having a look at the S15s, being on average 15 years old already they still hold their own. It’s one car that Nissan got pretty much perfect, the SR20DET, 6 speed manual, front mounted engine and in rear wheel drive. That is the epitome of a real sports car. A driver’s car.

Even the S13s are now around 25 years old. That’s older than the average Silvia driver. But what is it that makes them so special that people will pay a small fortune just to have their own? It’s all just metal in a certain shape with some paint slapped all over it, right? 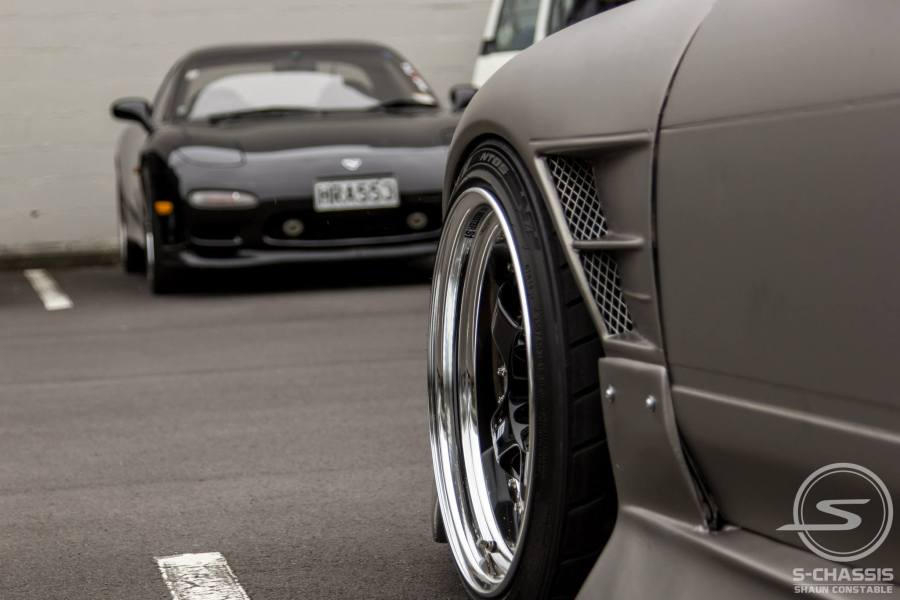 Although this was specifically a Silvia meet, other cars were welcome. They hid in the shadows trying to blend in with the rest. But really, it’s just another bit of metal built in a slightly different way that does the exact same thing. Why can we not just get along and live happily ever after 🙂 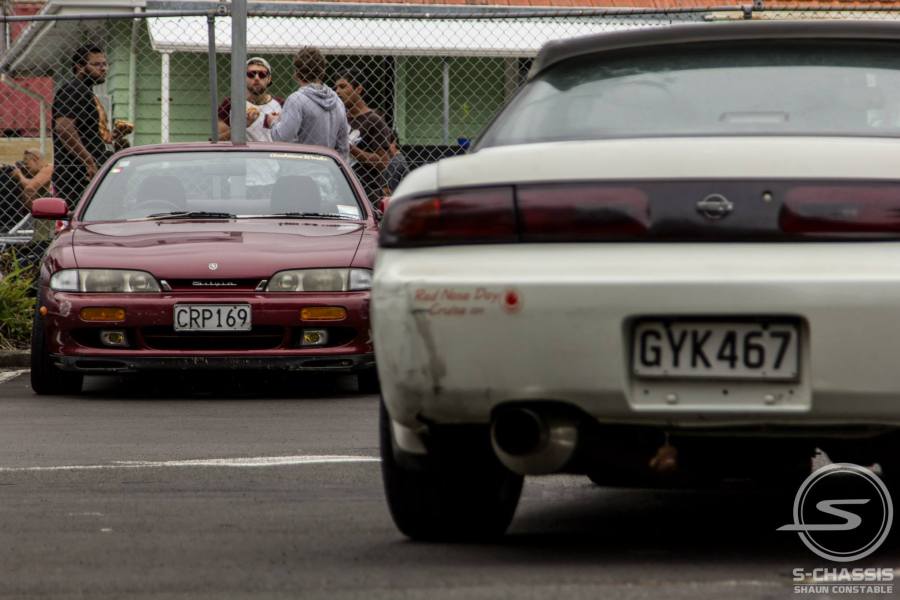 There weren’t really any Silvias that had little presence on the day, with cars rolling up from 11am till about 3pm. Though If there was an award for the least loved and cared for Silvia it would have to be the S14 pre facelift. The cheapest model in New Zealand and most common. Don’t get me wrong, I’m not saying they’re ugly. But if we were to compare a stock S14 pfl to any other silvia, the pfl would lose hands down.

If the bonnet on Ben’s S15 was closed, you wouldn’t think too much of it really. Can you tell what it is? What’s packed into that tiny little engine bay. A VH45DE Nissan V8. He drifts it too, that’s how a Silvia should be driven. Ben left the day in a well earned 3rd place.

Without a doubt the most expensive Silvia of the day, you couldn’t find a piece of dirt on this car, even with binoculars, it was so immaculate. It’s great to see owners put so much time and effort into their pride and joy. 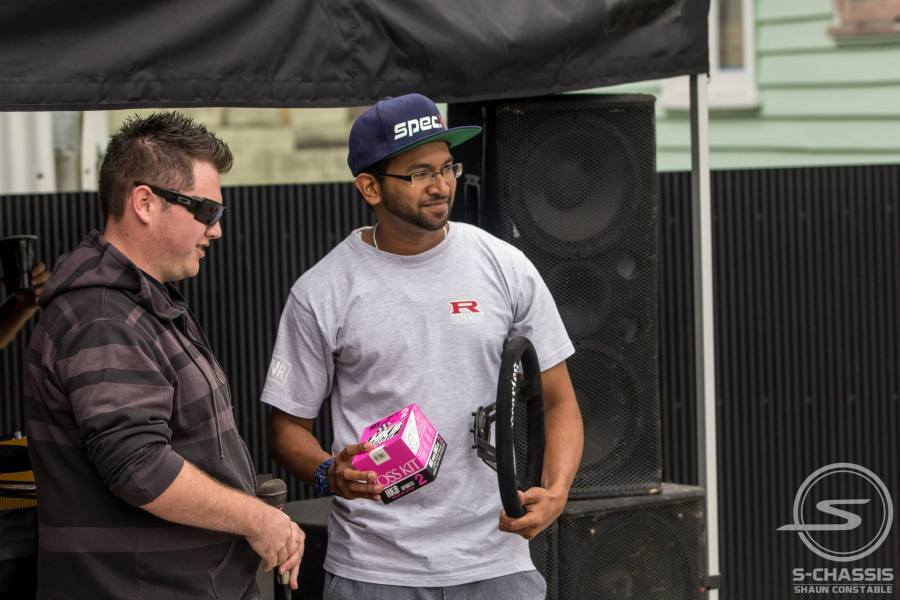 Alvin who owns this S15 came away with 2nd place and won some Scarles products for his cars. 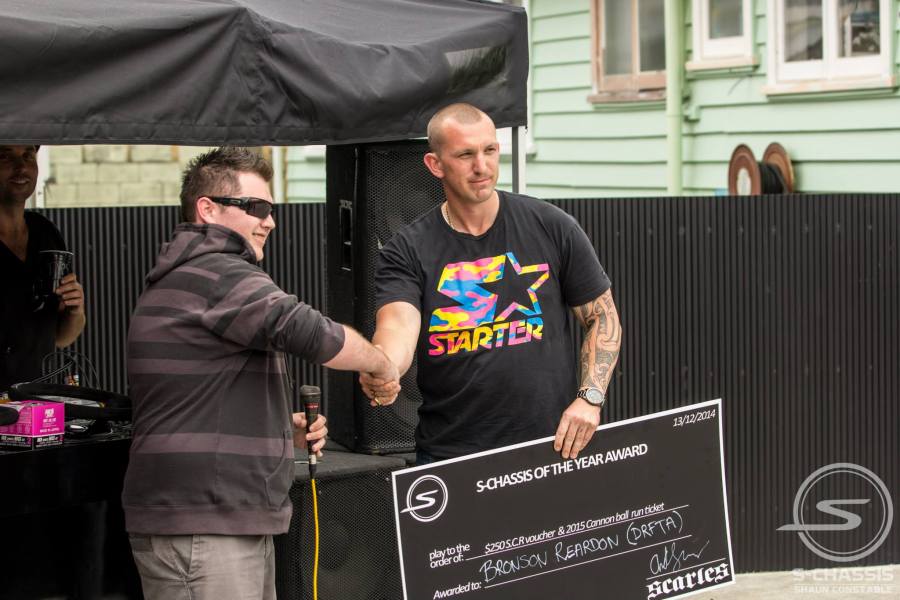 First place was won by Bronson in his 180SX, a well deserved win as his car was one hell of a crowd magnet. 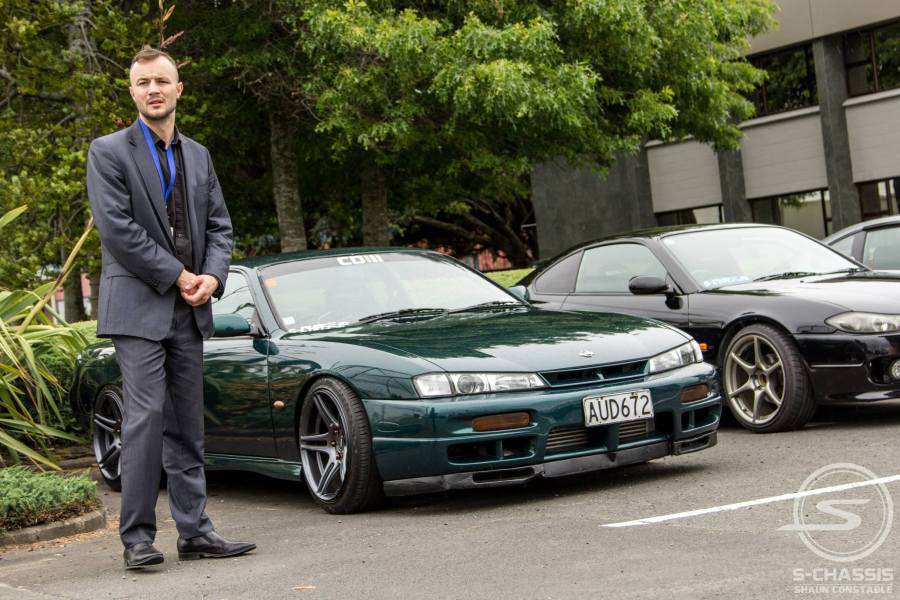 The highest of security was in place at Scarles on the day, with cars like these it was very much needed. I would hate to imagine how much collectively all of these cars would be worth and how much wrench time was put into all of them.

My personal favourite Silvia of the day without a doubt, the colour combo and wheels really stood out even though it was such a dark blend of colours. Who says Rota wheels are lame?

With the Scarles car park being a little too small to hold all of the cars, next doors car park was free game, rows and rows of Silvias parked up. If you missed this day, you really did miss out on something rather special. 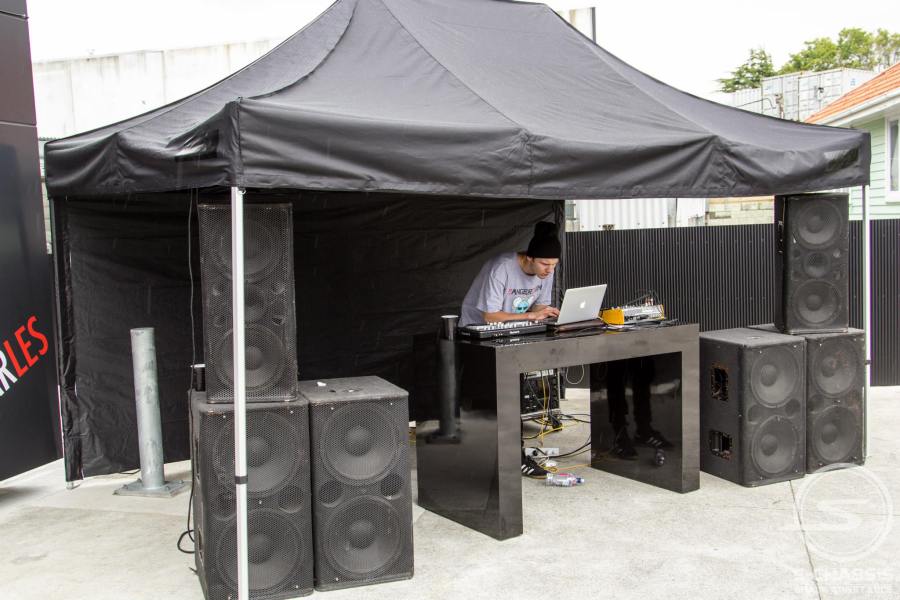 Sweet tunes were blasting throughout the day, check out all of those subs! Demon energy came a little late, so for the hard core hard parkers like myself 😉 we got to enjoy a few complementary demon boosts.

I think it’s safe to say that white is a popular colour for the later model Silvias. It’s a good choice of colour because it shows detail unlike darker colours. But there are negatives like accumulating dirt like no ones business after one drive. 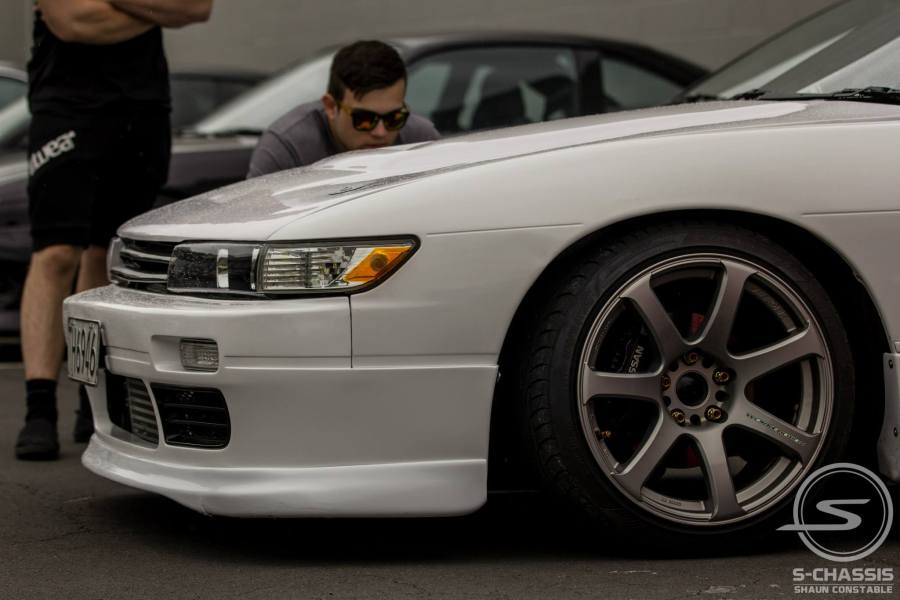 This had to be the nicest and cleanest S13 of the day, it just had everything down. From the wheels to the paint and style. We most definitely approve 🙂 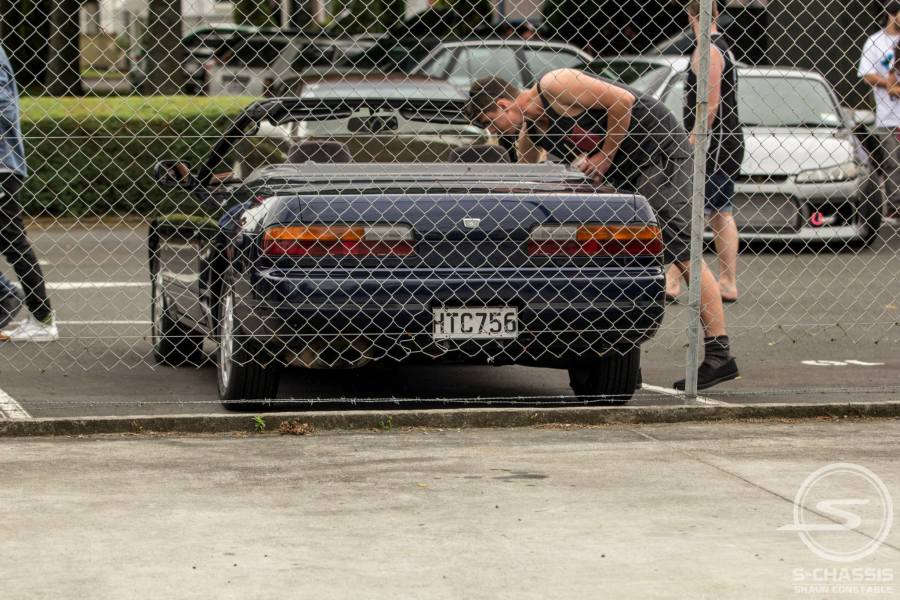 This is not something we often see in New Zealand, but as I said before we get pretty much every kind of car here. This is the only know S13 vert in New Zealand, it sure did shock a few people when the roof came off… that’s for sure. 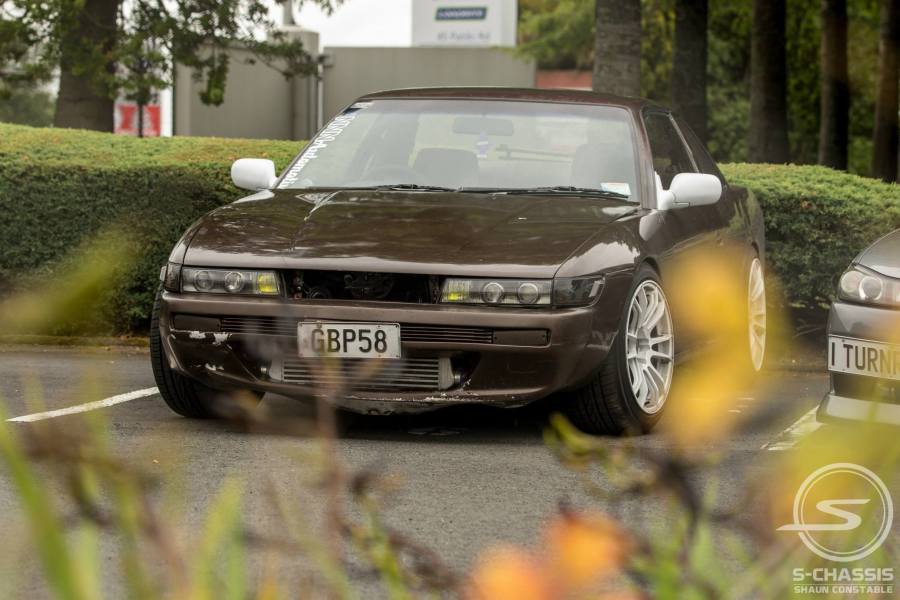 It’s hard taking photos in a car park, trying to get an angle or shoot that no one else would get. So this is where I think composition takes a big part in this sort of photography. Forget about what kind of gear you have, think outside the box in this situation and take the angle no one else would. 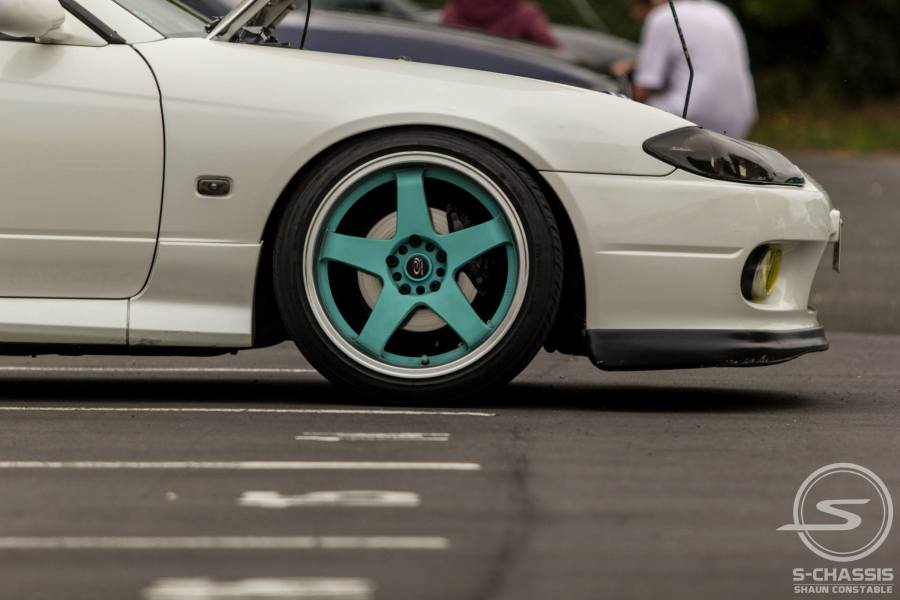 By about 3pm most people had left, but there are a few that stayed around. Mainly the ones from out of town. So I nabbed the opportunity to do a few shoots that no one else would have got. 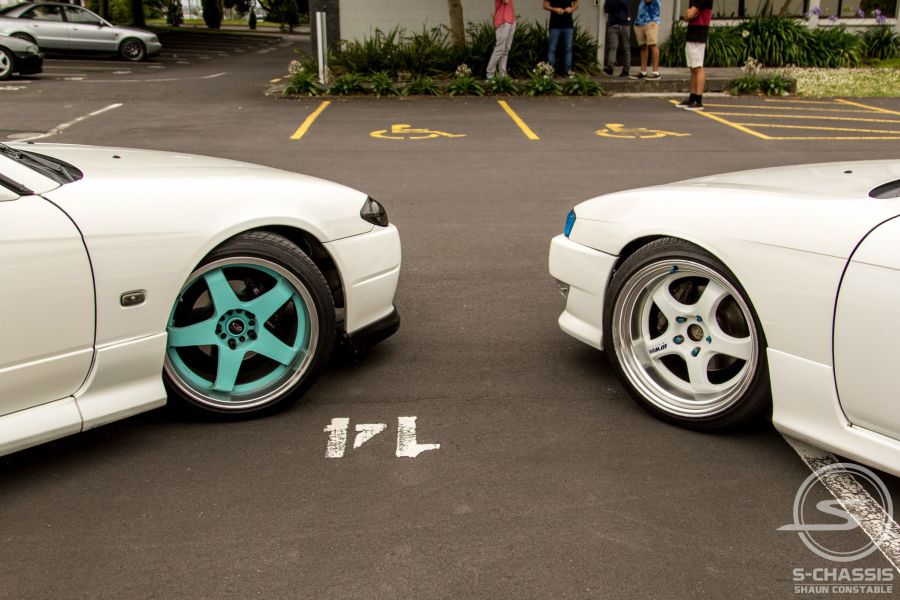 These two Silvia’s made their way up from Cambridge which is a couple hours away from Auckland and they stayed behind a bit to chill.

The blue wheels on the S15 and the blue lights on the S14 make a real good team colour combo, easily the best duo at the event.

If you love S13s, then how does this line up make you feel? There were about 8 there on the day, the missing ones unfortunately left too early for these photos. 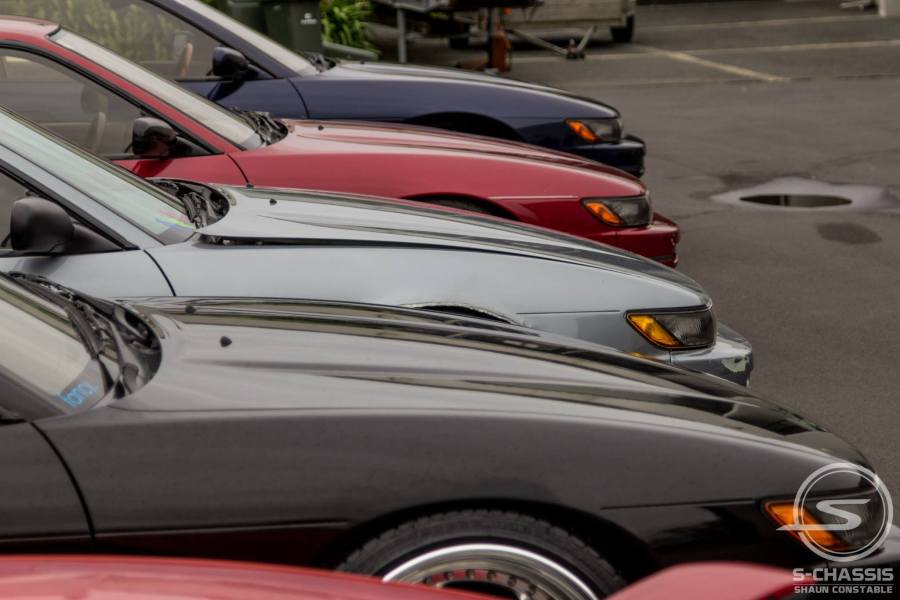 Seeing a number of such old cars lined up like this is something special on its own, but they all have something uniquely theirs which makes it just that little bit better. 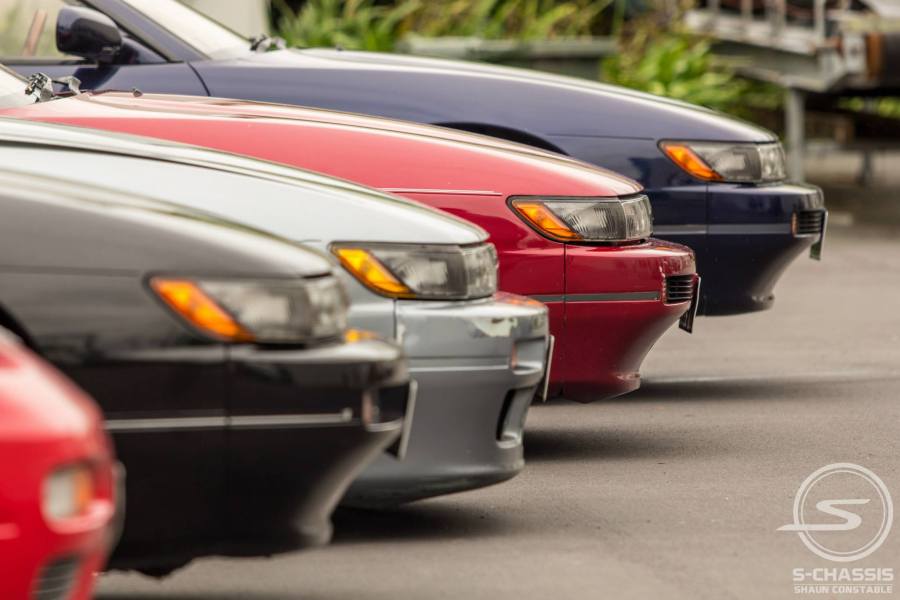 Looking at the ride height alone, you can tell what each owner uses their cars for, from daily drivers to show stoppers scraping on every leaf that gets driven over.

I don’t usually shoot more than one car at a time, so getting this opportunity to position a few cars how I wanted meant I could make the photo 100% how I wanted it. 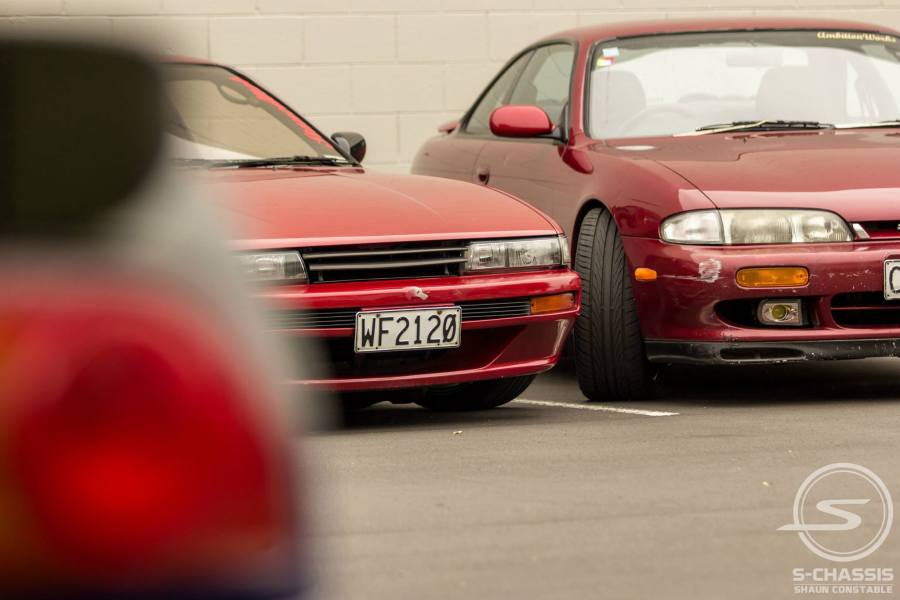 This photo features two non turbo Silvias, a S13 and a S14. One is a daily driver and one is a complete drift hack. Can you tell which? 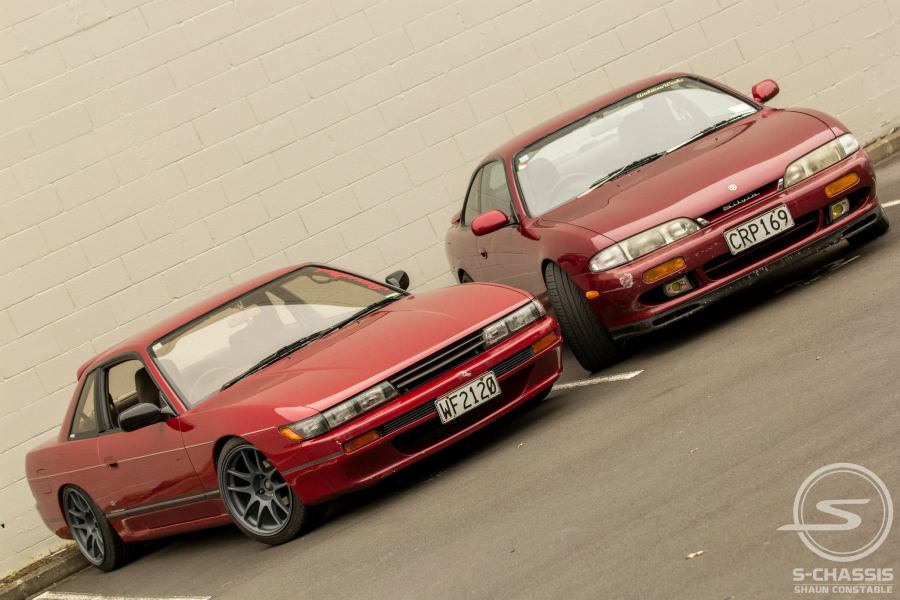 Two years ago, I didn’t have this car, or my camera gear. I didn’t even know anybody that was interested in this kind of thing. I sat at home every weekend bored out of my mind. I can honestly say I’d have my life no other way, spending weekends with new people, with cars, taking photos and talking trash. I wouldn’t go back for anything.

As the cars roll out and the day wraps up, it’s another successful event for S-Chassis. Prizes’ were won, friends were made, people were met and cars were looked at. Why would you want to do anything else?

Stay tuned for the next S-Chassis meet, that’s a wrap people.

If you have any questions e-mail us at ambitionworks@live.com
View more pictures from the event on our facebook page.
Sit back and have a laugh while you watch some short clips on our Youtube channel.
If you like Google Plus for some reason, we have one of them too.
We have more high res pictures on our Flickr!
To purchase stickers go to our online store.