Having only heard about Jerk Fest (Jfest) and all of the cool things that happen, we just had to get along to check out the 2014 Jfest in all its glory! This year it was held at Taupo Motorsport Park in New Zealand which was filled with plenty of drift cars and grip cars to last a lifetime. The weather forecast looked good the night before, so our fingers were crossed for a sun kissed day of raw automotive activities. 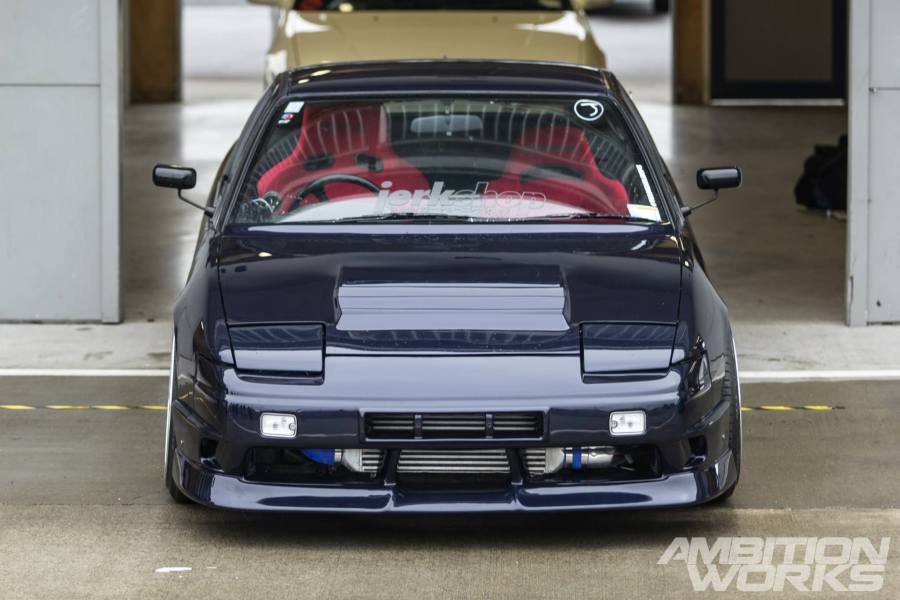 The day started for me at 3.45am, leaving the west of Auckland at 4.30am hoping to arrive at Taupo 8.00am sharp for a full day of fresh cars and spectacular photo opportunities.

Jfest is an annual event and is run by a tight-nit group of automotive enthusiasts that participate in straight grip racing to full on competitive drifting. As a private day there were still over 50 entrants present for the morning briefing, having made their way to Taupo from far and wide.

The weather was holding up by 9.00am. Perfect for shooting, with a natural softbox provided from the light clouds. I haven’t before seen a private event start off with a non-racing lap, it was an amazing sight to see every single car lined up in the Taupo pit, cars were everywhere! 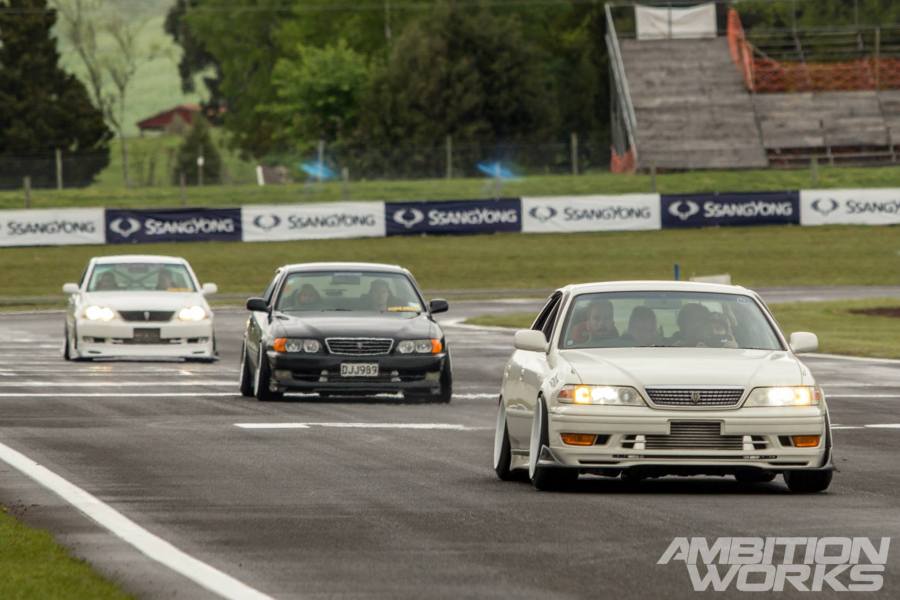 Jfest is run by the Circle Jerk Crew, however in that crew there are smaller groups of a few close mates that share the same cars and interests. A whole lot of new cars made their debuts, as you might be able to see from this photo canards are starting to become a rather popular accessory making these already low cars ground scraping low.

The day was split into two main groups, grip racing and drifting. A large number of Hondas dominated the grip racing with a few Honda Cup cars making an appearance. I sat at this corner for an hour, maybe a bit longer watching how much the different cars would squat under turning. It took no effort to tell which cars had racing suspension and which cars were running lowering springs or stock suspension. 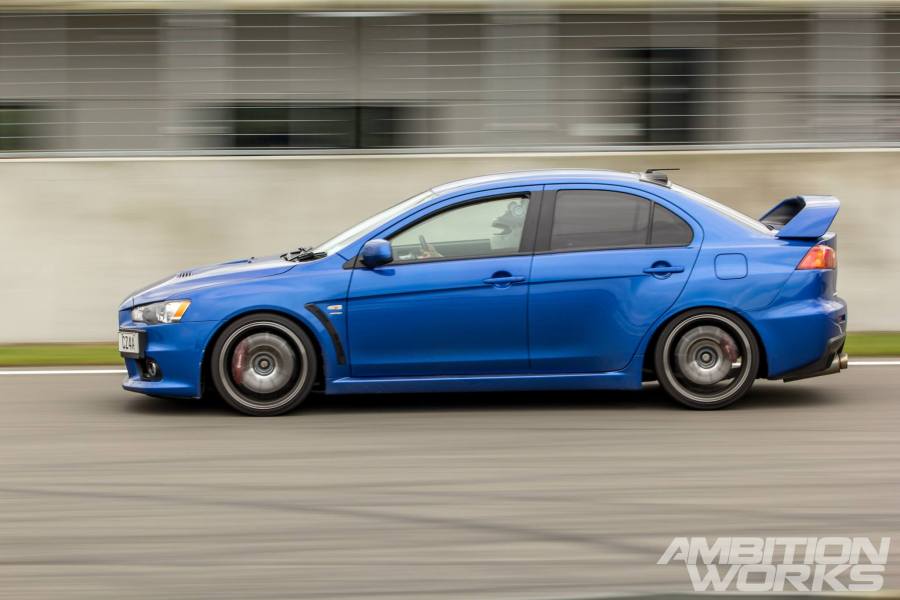 I haven’t really taken notice to the newer evo’s, but this one was a stunner of an example, a perfect daily means of transportation for the thrill seeker hidden inside me. The inside was just as amazing, everything was so sleek I could and would have eaten off the dash it looked that good.

If you’re ever feeling depressed or lonely, these events are the cure to happiness. The vibe is equivalent to the suns rays, just soak it up and have a good time with your mates. If you don’t have any, find someone with the same car and bingo they can be your new fellow automotive friend!

This was a sweet little custom made bike by the looks of it, made me think of the engineered to slide 2 stroke baby. This is just down right bad-ass. Whenever I need to think of something totally mean and aggressive, this look will be it.

I’m not much of a VW fan, but the early beetles are an exception. Apparently this little bright blue one had just gone through a wof before Jfest. With crazy wheel fitment its the same as a mullet, business up front and party in the back.

Of all the cars to grab my attention over the day, this one took a lot of it. A 1999 Audi S3 Quattro 1.8L Turbo 4WD putting down 154kws from factory with 6 gears of fury. Without any background distractions and if the car was sharper in the photo this would have been one of the money shots from the day.

Team cream had a few cars present including Royce’s ridiculously low R32 Skyline. Watching this car go round drifting and grip racing its 100% clear that it’s all about the driver. Anyone can hop in a 1000hp monster and post a fast lap time or create a smoke cloud. It takes a skilled driver to get in an under-powered car and show driving skill at this level. 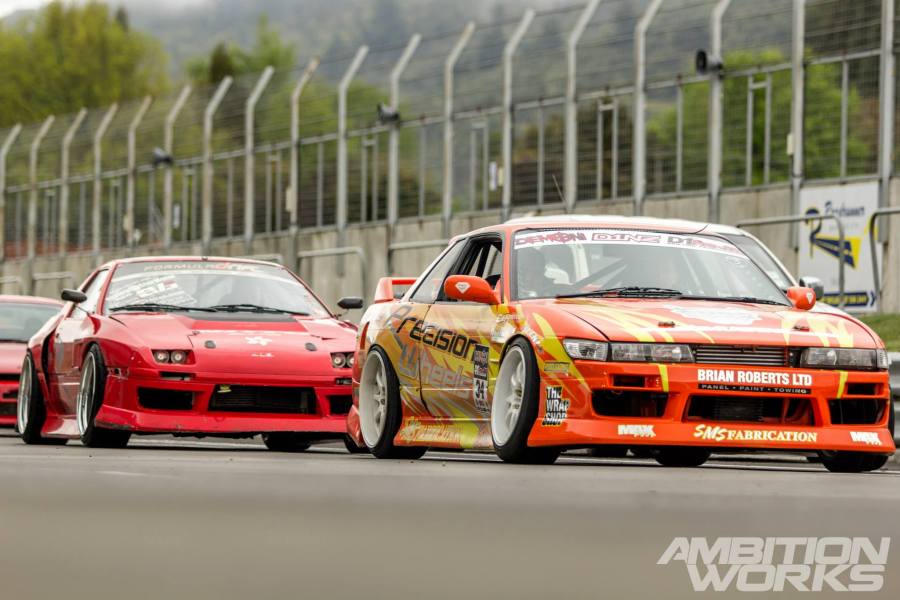 A couple of D1 cars made it out on the field including that of Ben and his S13. What makes this photo special is the red Mazda behind it. As I spend a bit of time going through the photos and editing them I saw that this was actually a left hand drive drift machine! Let me tell you it knew how to make clouds of smoke thats for sure!

With Corey having mechanical issues at Taupo the previous weekend and leaving early, he managed to keep on par all day today. Consistent drifts, insanely long smoke clouds, how else would you spend your weekend?

Kieran’s first time drifting at Taupo, unbelievable, a king of the MX5s, the one they look up to. Keeping up with the overpowered cars has never been so easy when you have no roof!

A lot of the cars that were doing their paces around that track had their cars at a reasonable height, well at a height where the chassis wasn’t taking the concrete with it. No wonder there aren’t anymore clean skylines for sale in New Zealand, there all at the race track sparking up the undercarriage and wall scraping with any chance they get.

With drifting comes smoke and the smoke comes from rubber. This is what happens if you stay out there too long and try your luck. If you have a look at the right side of the tyre there’s probably a few mm of tread left from all that aggressive camber. Although if we look to the left we can see no ‘tread’ at all. Quick tip: Just flip it around and she’ll be sweet.

I got the chance to meet the boys from legit|split and their wicked 180SX trio. With little to no convincing we went up the hill to an empty patch of land to complete a mini little photoshoot. Having two of the same cars side by side looks great, but when there’s 3 it’s heaven on Earth. Thanks Nico, Ben and Kurt for the chat, hope you like the stickers!

Also got to meet one of the Circle Jerk Crew photographers Wayne. A real top bloke who also happens to own this angry looking Silvia. It’s funny how I’ve been taking pictures of peoples cars for the last year or so and only now I’m starting to put faces to cars. Like I said before you don’t need friends when you can just make them at the racetrack.

Looking at this corner again, I was too lazy to walk any further around the track so this was as far as I got. Even though the cars straight in this photo, looking at the wheel distance from the ground to the body there is a visible difference. It’s interesting to see how cars handle when pushed to the limit, even though this looks like a race car I doubt that it has stiff racing suspension judging from this photo alone. 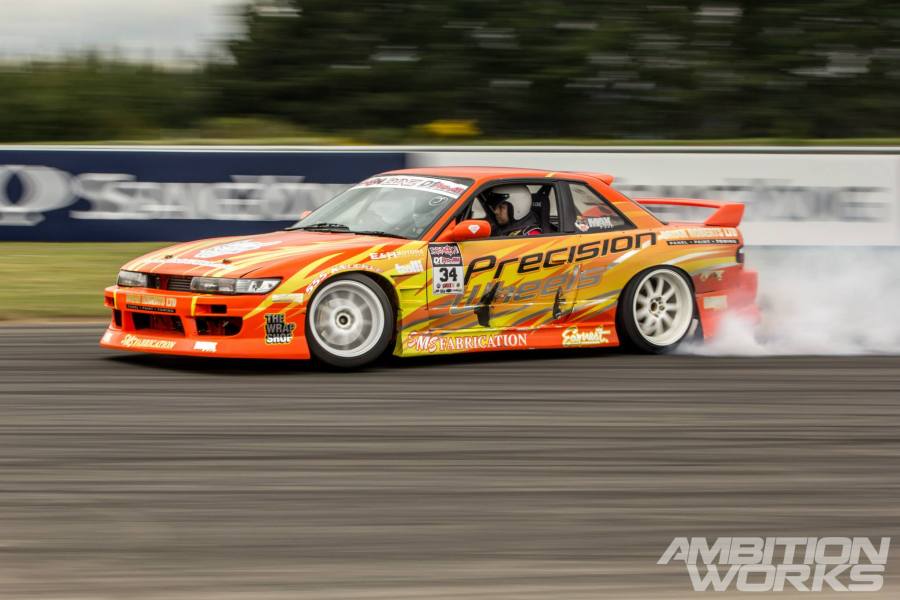 Back to the drifting. Ben provided a shadow of clouds throughout the day, while still rocking his battle scars from the first round of D1NZ. Im starting to love the look of these new D1 cars, its like they took 90s styling but made it sleeker and simpler to fit the look of tomorrow.

The left hand drive mazda was having a little bit of trouble dirt dropping every now and then, with this one being the mother load. When he wasn’t dirt dropping though, the wheels were spinning, the angle was cranking, the engine was roaring and the smoke was pouring – what a sight. 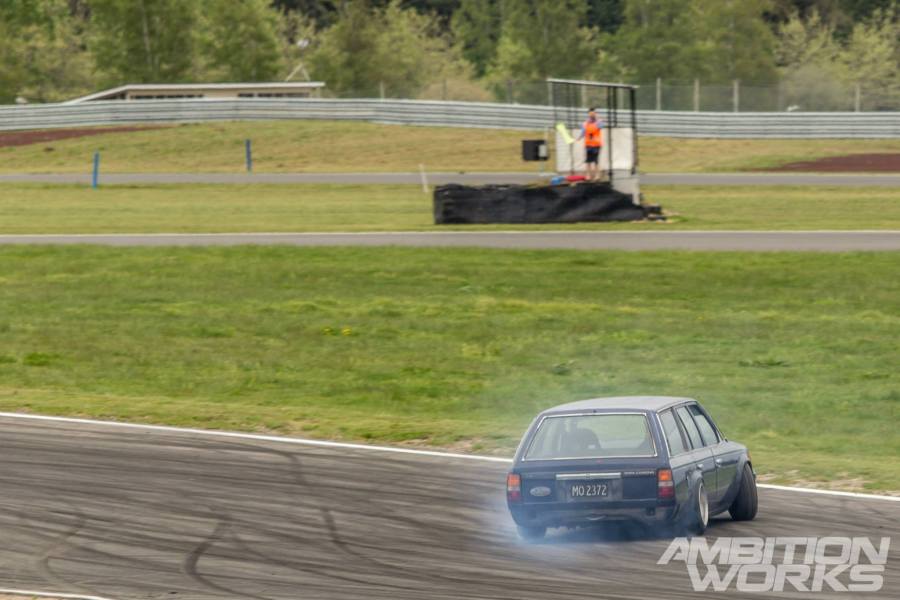 As far as old cars go anything past 1985-1990 is classified as “oh look at that old car”. I’m lacking on that skill of clarifying what’s what, but this ‘old’ car certainly knew how to drive. Being able to hold angle like that and not start mowing the grass is a skill in itself, nice work.

Later on in the afternoon we started to see some drift tandems. I was lying down in the dirt between two muddy tractor tyres to get this angle. It’s a little bit cropped so the shakiness started to show, but trying to pan while lying down is one difficult task on top of having to guess when the cars were coming into the corner due to the massive tyre blocking my view.

I lay here pondering my thoughts for about half an hour or so. Most of the photos came out blury or out of focus from the camera trying to grab focus on the car in a split second but the ones that were spot on looked very nice. I think the ‘rally’ effort from the car in the background of the picture made it that much more special of a photo. Thanks Neal. 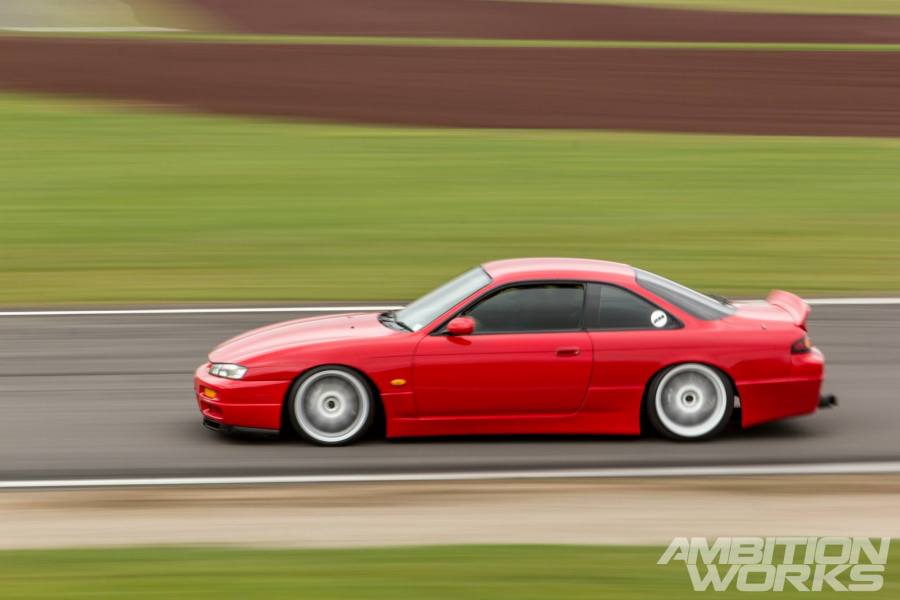 Wayne’s S14 was looking super sexy out on the track participating in the grip racing throughout the day. Something about this red and white theme is beginning to become rather popular in New Zealand and I can see why because it looks absolutely fantastic!

Throughout the day I noticed a few cars starting to spit flames, and this crazy fast Mitsubishi was shooting massive balls of fire. Unfortunately I couldn’t get the flame in the shot but this black smoke cloud will give you an idea of how big the flame was getting.

I’ve got to say that walking through the pits at any automotive event is one of my favorite things to do especially at a grassroots day or private event. Everyone is real friendly, people are willing to talk to you all day long about their pride and joy. It’s a good time to meet people and learn new things like who owns the car that’s placed as your desktop wallpaper. 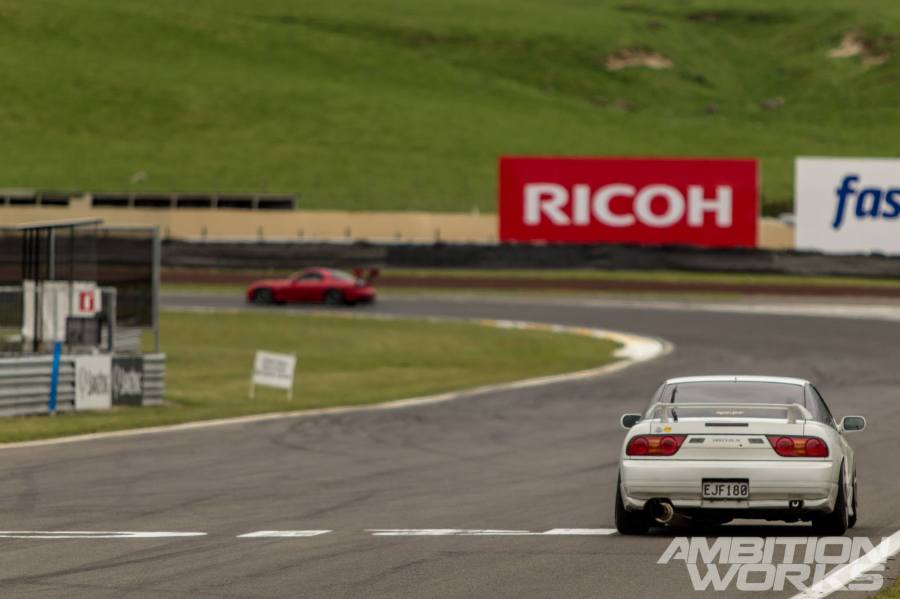 Until this year I had never been to Taupo, this was my third time and there’s no doubt that its an amazing track for racing and drifting. Being smack bang in the middle of the North Island of New Zealand its a great place for people from all over to travel to and not take up their whole day doing so. 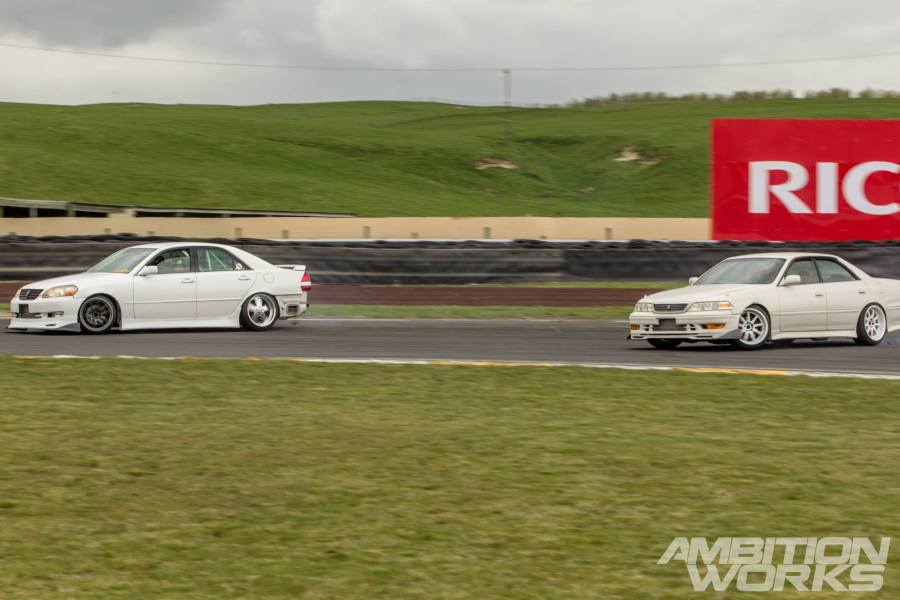 It was worth the 3.45am wake up to enjoy this marvelous day. Meeting people that had been following me online was great fun. You can’t beat a sweet day with sweet cars there’s just nothing like it!

By 4.00pm the rain started to kick in and the day sadly ended. The long drive home didn’t look appealing, but at least it was in the rain. This was another weekend well spent in my books at the 2014 Jfest and we can’t wait for next years event.

If you have any questions e-mail us at ambitionworks@live.com
View more pictures from Jfest on our facebook page.
Sit back and have a laugh while you watch some short clips on our Youtube channel.
If you like Google Plus for some reason, we have one of them too.
We have more high res pictures on our Flickr!
To purcahse stickers go to our online store.