Another year rolls around meaning another Speed Show awaits us in the month of July. It’s a show about anything SPEED held at the ASB showground in Auckland, New Zealand.

Turning up at around 3pm on the last day through the back entrance seemed a little disappointing, but this meant no lines and no crowds making every shot that little bit simpler.

The show includes pretty much any type of car you could think, this is Sky Zhao’s 350Z sitting outside the front entrance.

Inside we were greeted with breath taking views of what any petrol head person’s dreams probably look like. Millions of dollars’ worth of metal in these showgrounds. Plenty of race cars made their presence. New, old, fast, slow – I particularly liked this BMW with red and blue stripes.

Although there were heaps of race cars filling the showgrounds, there was a little bit of room for Alex Kelsey’s MC2 rally car. This crazy thing was built from the ground up.

Supercars, Supercars everywhere – Lamborghinis, Ferraris, McLarens, Porches the list goes on… I haven’t really been interested in these cars due to that massive price tag, but something about this McLaren really makes me want to sell my parent’s house 😉 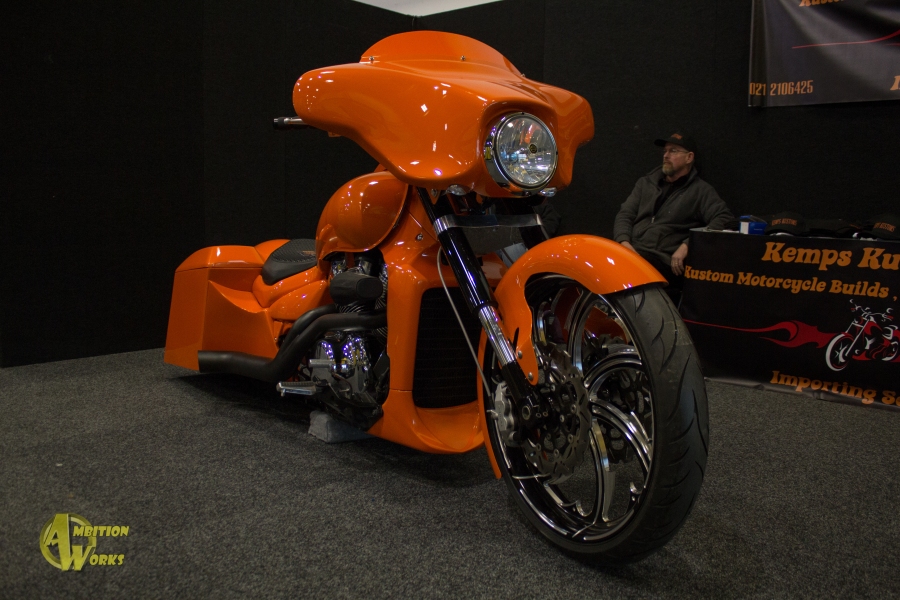 The motorbikes seemed to be dominated by the cruiser style this year. My favourite one being this crazy custom orange cruiser. I love how it just gobbles up the rear wheel and looks like it’s just gliding along the air.

Dragsters are another thing altogether, it takes a special type of person, the ones with balls as big as their heads to fly down the strip in one of these beasts. The tyres alone are wider than all four of mine most likely. 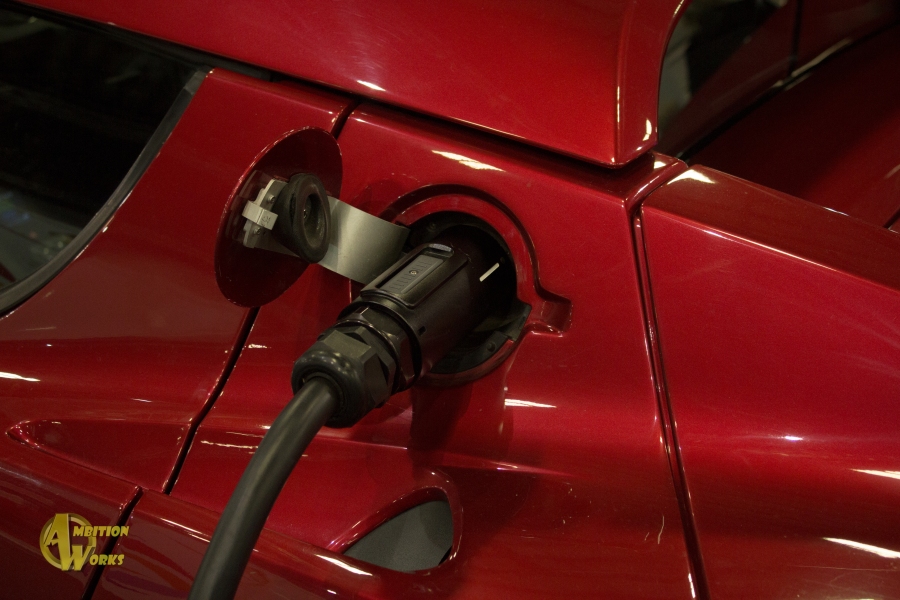 Let’s forget about dragsters for a second, the sound the engine makes and have a look at electric cars, the sound of nothingness. Although it is the way of the future and it will be main stream in about 10-20 years – nothing, and I mean nothing will be able to replace the feeling of being behind the wheel of a car that runs of petrol! 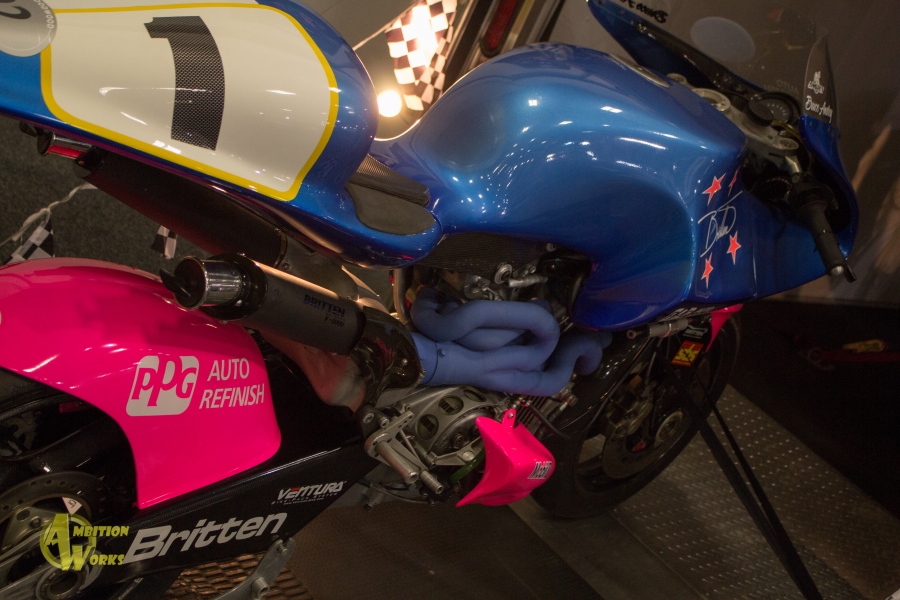 This bike is something of a masterpiece, John Britten’s motorbike. I can remember back in primary school doing a project on John Britten and all his crazy inventions, this is the one that stuck the most. The blue and pink colours, those stars, and that number 1 – all make for a perfect bike! 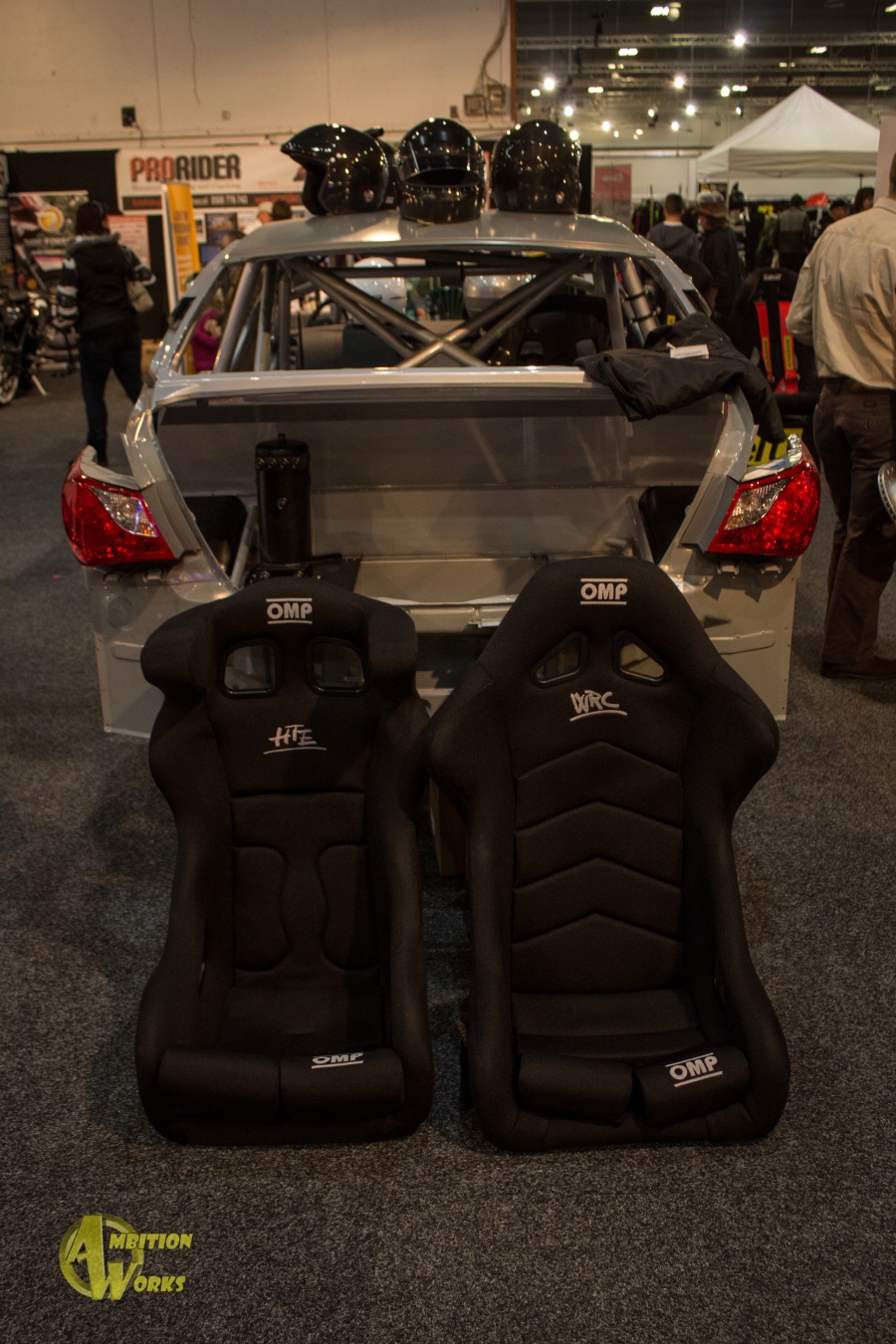 Among all of the cars on display it was also time for retailers and brands to promote what they do and interact with their customers, something that they may not be able to do outside of an event like the CRC speedshow.

Growing up with Japanese cars and owning them for a bit of time now I am rather familiar with most parts under the bonnet. BUT this, this just makes me feel like a 12 year old again. BUT that’s not even the funniest part, it’s in a crazy super-fast speed boat.

SCA and CRC had a slot car set running throughout the day with times being posted up on a white board, if you can’t afford a real car and are sick of pushing hotwheels on your little carpet racetrack then this is the thing for you! – Just ask mum and dad first.

The age old debate that is still raging through Holden and Ford lovers’ mind, which one is better? In my opinion, they are basically the same car. It’s like comparing Steinlager to Heineken – it’s preference based. But the most influential factor is what one you grew up with. Holden or Ford. 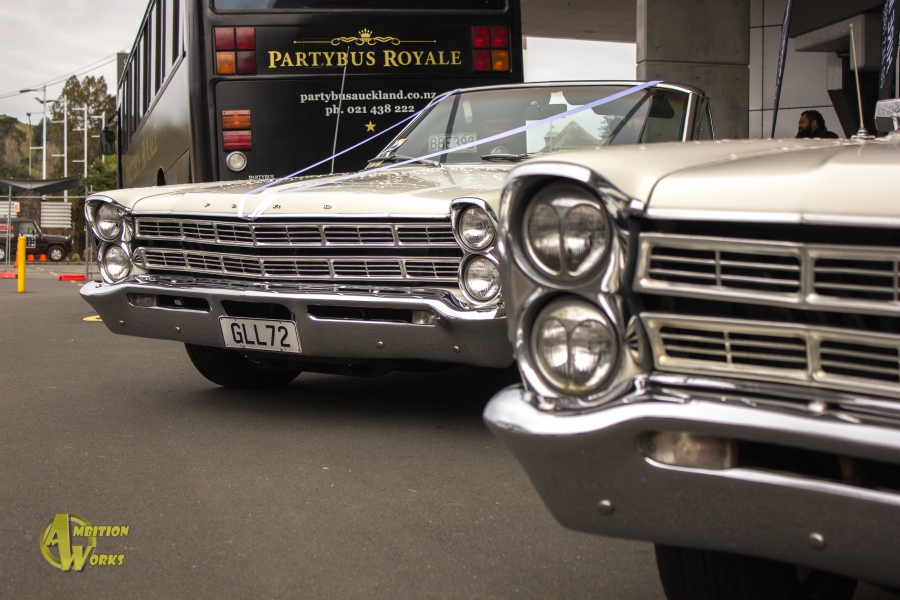 Outside again and I spot these two twins. Having one awesome car is a great feeling but then seeing two side by side that are mostly if not exactly the same is a different feeling altogether. 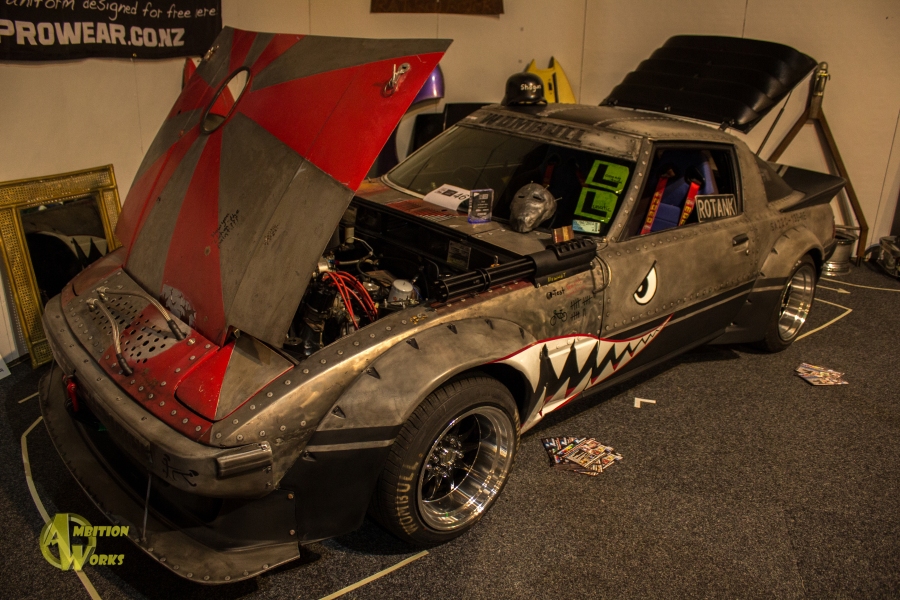 WOWBULL – One of the weirdest and probably most misunderstood build at the event, the one that confuses everyone and leaves them blank looking for answers. I love it! The sheer detail alone is amazing and then putting the effort into presenting the car with props just gives it that extra touch that will let it outshine the other show cars.

Following Speedhunters lately, and Mr.Chen has been covering these insane monster truck/rally events. This beast brought it all back to me, to think that these events happen in NZ would really be something else. A rather new business in Auckland is BlastaCars, but they’re doing it right – well better than the previous owners did anyway. Up until this show I thought their company car was a Mazda MX5, but no it’s some weird Ford thingy. They definitely fooled me :O 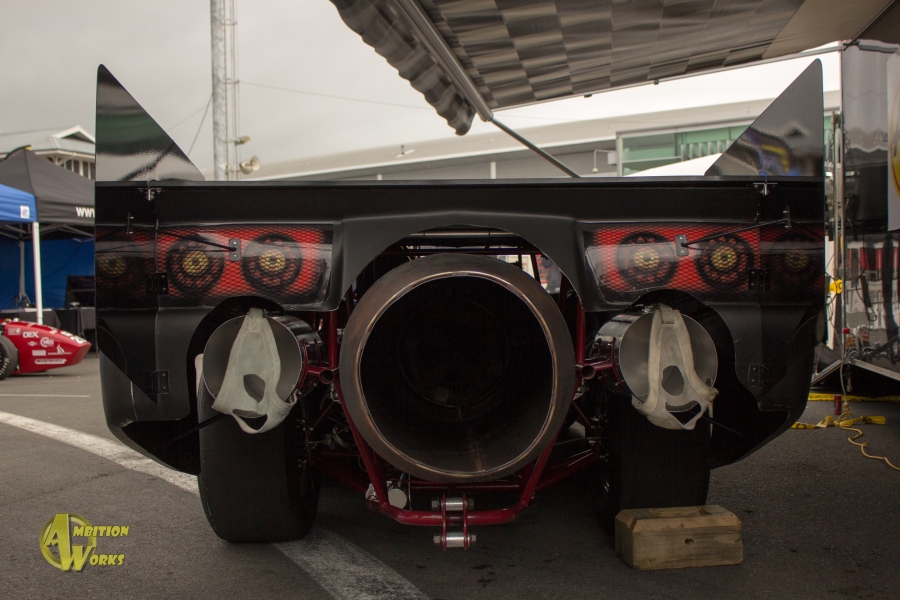 If you have ever been near a fire you’ll know what a little bit of heat feels like, how about standing next to this rocket as it fires up the ignition? Definitely not something on my dream list of things to do in one lifetime! 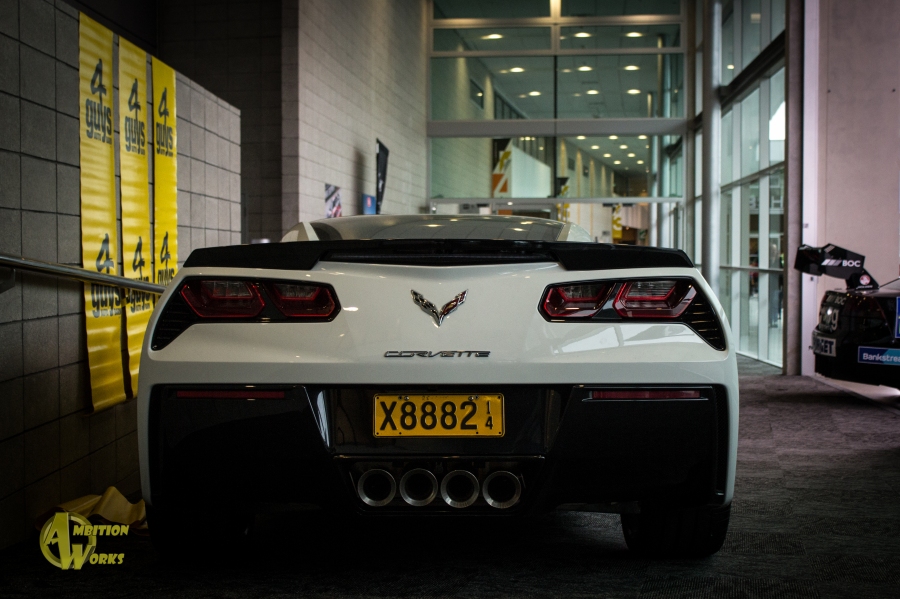 It’s amazing how far cars have come again in just ten years. I think that any car that’s older than 1990 is oldish, but that’s still 25 years old! Older than me anyway – This was the number 1 new car with too much litres in the engine, but that booty… dayum and the exhaust… it almost looks like ITBs!

If you have any questions e-mail us at ambitionworks@live.com
View more pictures from the CRC Speed Show on our facebook page.
Sit back and have a laugh while you watch some short clips on our Youtube channel.
If you like Google Plus for some reason we have one of them too.
To purcahse stickers or pictures go to our online store.